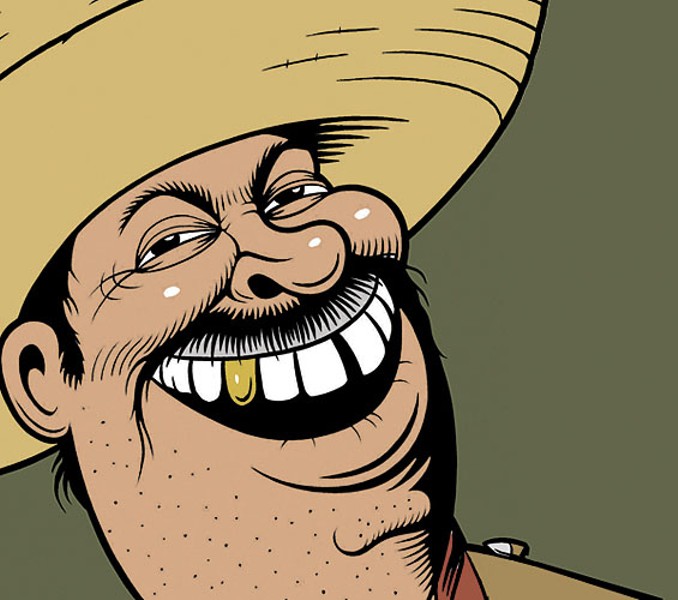 Dear Readers: UK's spectacular Guardian newspaper has asked if I could field some questions for their readers as part of the paper's summer travel package — turns out Brits want to know more about Mexican food! Let's be benevolent toward those buggerers: their idea of what our comida constitutes comes solely from their gabacho cousins, and not from any actual Mexicans. Gracias to the Guardian for the opportunity, and mark my words: we Mexicans are going to avenge the Armada, with the Irish as our wingmen. So, without further ado...

Dear Mexican: I'm a Brit who's traveling to New Mexico and Texas during the summer. We love our Tex-Mex in England — all that chili and yellow cheese! So where can I get the good stuff?
The Boy with the Nachos in His Side

Dear Limey: For starters, you're NOT going to find much chili and yellow cheese in New Mexico, or even in all parts of Texas — the two states have about as much in common as Doctor Who and Star Wars. New Mexico is most famous for its Hatch chiles, fulsome, fleshy peppers from the southern part of the Land of Enchantment that the state's residents either eat whole, grill and place inside cheeseburgers (the Blake's Lotaburger chain is famous for their version) or turn into a stew. That state's Mexican food is unique because it dates back to the days of the Spanish conquistadors, back when you Brits were still eating each other at Jamestown. You should think of Texas, meanwhile, as the Indian subcontinent: a large, unwieldy, country of countries with edible brimstone (curry for the Asians, salsa for the Mexis) the sole unifier. Since you want to visit New Mexico as well, you'll probably only be able to travel to El Paso — make sure to stop by Chico's Tacos and order the rolled tacos, what us Yanks call taquitos. Just in case you travel elsewhere in Texas, here's a brief primer on Tex-Mex faves: in San Antonio, the natives eat puffy tacos, which look like Cornish pastys inflated to its golden, crispy extreme. South Texas is famous for barbacoa (a slow-roasted cow's head) and cabrito (slow-roasted kid — have the Pakis taught y'all to eat goat yet?). Texas is also the land of nachos, so do me a favor, Boy: remind them that they stole the idea of vile yellow goop poured over crunchy trash from your Welsh rarebit.

Dear Mexican: Do we have authentic Mexican food in the United Kingdom?
Black Legend Bloke

Dear Limey: Yes, and no. My friends who have traveled across the pond always return with horror stories about the Mexican food there, and they all agree with the Top Gear pendejos — Mexican food in Britain IS refried sick. But it's still Mexican food. See, all tacos are created equal, but some tacos are more equal than others. When people ask about "authentic" food, they mean regional Mexican specialties that haven't achieved widespread popularity ala tacos and tequila. A good place to try such dishes in the UK is London's Wahaca — their mescal comes from Mexico's rural regions, tinga is a meat preparation from Mexico City, and pibil is the pride and joy of the Yucatan. I'll only fault Wahaca for its silly name, a transliteration of the Mexican state of Oaxaca — you tea sippers too stupid to learn how to pronounce Nahuatl?