MABEL SUEN Asian Kitchen is serving Taiwanese dumplings in addition to Korean specials such as bulgogi.

Liling Wemhoener has a funny catchphrase when talking about her turn from reflexology to the restaurant business. "I went from foot to food," Wemhoener laughs.

She'll share the story of her career change multiple times a night while working the dining room at Asian Kitchen, taking the time to talk with each and every patron no matter how busy she gets. It's how she gets her energy, she explains, a character trait that has led her to a career in two vastly different parts of the service industry.

Sometimes, Wemhoener only has time to give diners the short version: She owns a reflexology spa called U-City Foot Massage and Relaxation Center, but when she was presented with the opportunity to buy the Korean mainstay Asian Kitchen, located just a few doors down, she simply could not pass it up. Now, four months since taking over, she's turned the place into an industry destination, with food lovers descending from across the St. Louis area to the humble strip mall that houses it.

But Wemhoener's turn to the restaurant business was not as abrupt as it first appears. A lifelong home cook, the Taiwanese native had found herself in the role of family caretaker because of her natural inclination to help people. Part of that involved cooking. Early on, she discovered a knack for preparing food, developing a reputation as an outstanding home cook.

After moving to the United States in 1994, Wemhoener gravitated to the hospitality industry, working as a server at a Japanese restaurant for six years. Though she enjoyed the work, her friends encouraged her to open a place of her own.

That opportunity came in 2001, when Wemhoener bought Shu Feng, an established Chinese-Korean restaurant in University City. She reveled in running her own restaurant — and might still be at Shu Feng today were it not for a personal setback that pulled her away from the business. While visiting from Taiwan, her sister developed a serious mobility condition that rendered her virtually paralyzed from the waist down. Wemhoener became her caretaker, a full-time job that prevented her from working outside the home. She sold Shu Feng to her longtime chef.

Her sister eventually returned to Taiwan, leaving Wemhoener in a position to begin working again. That's when she opened her wellness center specializing in reflexology and massage. Business boomed, but she wanted more.

Last November, she got just that when she was given the chance to buy Asian Kitchen at a bargain price. She gave the ten-year-old Korean restaurant a deep clean and began buying higher quality ingredients, but she otherwise planned to keep the restaurant mostly the same as under its former owner.

Still, she could not shake the feeling that she wanted to put a little bit of herself into the place. In no time, she was adding a handful of Taiwanese specialties to the menu — and dazzling the restaurant's regulars in the process.

On first impression, a casual visitor might not realize that anything has changed at Asian Kitchen, outside a menu board at the front entrance listing a few Taiwanese dishes. Everything else remains virtually unchanged, with a menu prepared by the restaurant's talented Korean chef including such staples as dukbokki, the cylinder-shaped rice cake dish accented with thin pieces of fish cake. Thick red pepper sauce blankets the components in slightly sweet, mild heat. It's like a mouthwatering Korean version of gnocchi and red sauce.

Kimchi jeon is a wonderful rendition of the classic Korean kimchi pancake, its crisp flour batter liberally flecked with fiery, fermented vegetables. Mandu, or Korean dumplings, are also well-prepared, flawlessly pan-fried so the exterior crisps up to a golden brown and filled with succulent ginger-kissed pork and scallions. The stuffing is so flavorful, you barely need the vinegary soy dipping sauce.

Wemhoener is adamant that she only buys the highest quality ingredients, which becomes evident in the grilled mackerel, its oily flesh a pure distillation of the sea. Even easy comfort food dishes shine, like chicken prepared bulgogi style. White onions and the meat's sweet soy garlic marinade caramelize on the searing-hot cast-iron serving dish and form a sauce for the already flavorful chicken. The best part is the fond, or the little bits of browned meat, onion and sauce that forms at the bottom of the dish. I found myself scraping it off and using it as a condiment for the chicken. 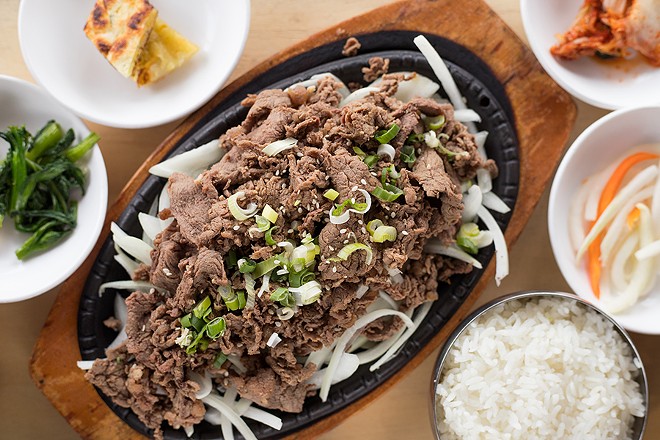 Even a simple bulgolgi beef fried rice omelet dazzles down to its ketchup drizzle, a surprisingly welcome condiment that adds brightness. In fact, the only dish that proved less than impressive is the bulgolgi kimchi cheese dolsot. Unlike regular bibimbap, cooking it in a dolsot, or hot stone bowl, allows the rice to crisp at the bottom of the dish. It's a wonderful play on texture; what threw me off was the addition of what seemed like American cheese and iceberg lettuce, which enveloped all the other components in wilted goo. Asian Kitchen offers several other versions of bibimbap dolsot; order those instead.

Wemhoener is determined to not alienate Asian Kitchen's regulars; the still-flowing soju and excellent versions of Korean food the kitchen is preparing on her watch suggest there's no fear of that. However, it's her two Taiwanese additions to the menu that have made the once-sleepy restaurant a must-visit destination for other restaurateurs and scenesters. 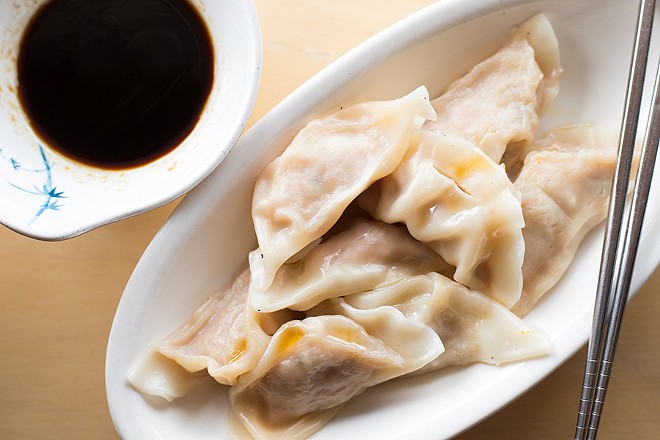 The first are her Taiwanese dumplings. The wrappers are so delicate, they are like rippled ribbons of silk. The filling is no less extraordinary: Rather than using a ground version, Wemhoener minces her pork to give it a heartier texture, then cooks it in broth before mixing it with garlic and ginger. The result is a filling that is not quite as liquidy as a soup dumpling, but significantly juicier than most pork dumplings. 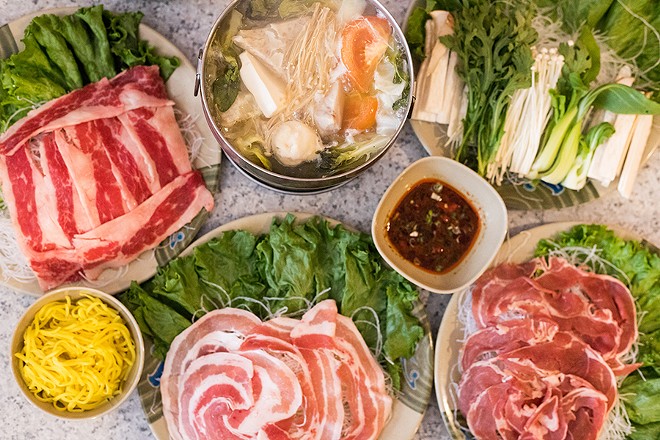 Wemhoener's Taiwanese-style hot pots are positively exquisite. An individual-sized pot of vegetable broth, teeming with enoki mushrooms, cabbage, tomatoes and squid balls, is placed on the table over a small burner; once it begins to simmer, you place whatever protein you've ordered — lamb, beef, pork or seafood — into the liquid to let it cook. The broth's flavor is delicate, but it intensifies as it reduces, giving off a different flavor with each serving. It's lovely without any added condiments, but that would mean missing Wemhoener's extraordinary "hot pot base," an umami bomb so deeply flavorful it's haunting. She says her secret is a shocking amount of garlic and fermented tofu, but its power is such, I'm convinced she's conjured some sort of magic. You're supposed to add it to your bowl after doling out your portion of hot pot, but I found myself dipping her dumplings into it, spooning it over my noodles and eventually foregoing any shame and just dipping my chopsticks into it and eating it straight.

Wemhoener relies on an executive chef and sous chef to prepare the Korean side of the menu, but the Taiwanese dishes are all her handiwork. It's a surprising amount of work considering she's not only running the busy restaurant but operating her reflexology and wellness center at the same time.

For now, she hasn't packaged the two experiences, though she insists that the best way to enjoy her hot pot is to head down to her spa first, then sit down for a meal feeling rejuvenated. I'm sure the treatments are wonderful, but they seem unnecessary — Wemhoener's food is all you need to energize mind, body and spirit.