As Latino Clout in St. Louis Grows, the Cardinals Test a Spanish-Language Broadcast

The longtime announcer flew in from Los Angeles to call the games at Busch. Both Ascencio and Bengie Molina arrive at the stadium about four hours before game time to prepare. They're still amped up from the night before. Not only did Yadi hit that fifth-inning home run — he smacked a walk-off double in the bottom of the ninth to beat the Cincinnati Reds 4-3.

"It was such an amazing feeling," Bengie Molina says. "It's hard to explain it — joy going through your veins."

"Una noche histórica" is the way Ascencio describes it.

Both men are hoping the Spanish broadcasts are more than a one-time promotion for the Cardinals. The Hispanic community in St. Louis may be small, but it's part of a Midwest market that's growing rapidly. Ascencio is used to working Dodgers games back in California, where he estimates 50 to 60 percent of the fans are Hispanic. St. Louis is "totally different," he says, but there is a lot of potential. Fans across Mexico, including Ascencio's family in Tijuana, streamed the inaugural Spanish broadcast the night before, and he believes more fans will follow if they can hear and understand the game in their native language.

"I know it's just two games, but you have to start somewhere," he says.

Molina says he had family from Puerto Rico to Pennsylvania listening the night before. Like Ascencio, he spent most of his career on the West Coast. He accepted a position as an assistant hitting coach for the Cardinals after his retirement but has spent this season at home in Arizona while his wife recovers from hip-replacement surgery.

He looks out the windows of the broadcast booth where his kid nephew, Yadi's son, is bounding around the infield in a miniature jersey. 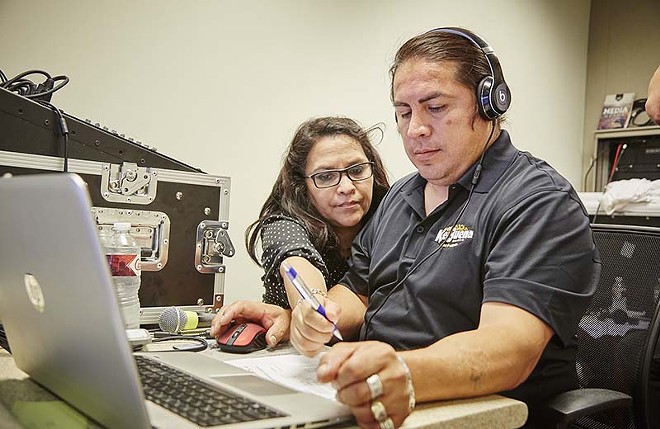 As he did last night, Molina will serve as the color man or analyst during the broadcast, dropping in to explain intricacies of the game or add context to Ascencio's rolling play-by-play. The Ke Buena team had to adjust its timing on the fly during the first broadcast to accommodate subtle differences in the way the game translates into Spanish. Differences in syntax and cadence tend to make Spanish utterances take longer, Kyle Garcia explains.

"A sentence I say in English might take me four seconds, but to say the same sentence in Spanish could be like eight seconds," he says.

It might seem like a small thing, but it can wreak havoc on a broadcast that's been mapped out with precisely timed commercial breaks. Brenda Garcia and the rest of the crew scrambled throughout the previous night's game to solve the problem, but managed to keep everything flowing through Yadi's final, thrilling hit.

Tonight, Garcia is worried about a link on the Ke Buena website. Although her crew is producing the broadcast, it's actually airing on a Major League Baseball app and a KMOX sister station because of licensing contracts. She's heard some listeners hoping to stream the game somehow missed the giant "ESUCHA EN VIVO" heading that redirects them from Ke Buena's site and clicked on the wrong spot. She has their web developer add "ESUCHA AQUI" tab with bright red arrows pointing in the right direction.

These types of behind-the-scenes headaches would easily be worked out during the early days of a season, but Garcia doesn't have a full season. She has two games to make this a success.

"My head is pounding," she says when she finally has a moment's break.

She sets up in a rolling chair at the back of the booth, where she can quickly wheel between her sound engineer and another crew member, who will record the game and edit highlights from the broadcast for replays. Molina and Ascencio settle into their places in front of the window, and the Cardinals run onto the field. Martinez is pitching. Ascencio leans into the mic.