As Downtown St. Louis Weighs Its Homeless Problem, All Eyes Are on Larry Rice

PHOTO BY NICK SCHNELLE Rev. Larry Rice looks out the front door of the New Life Evangelistic Center as homeless men wait in line for potential beds for the night on November 14. 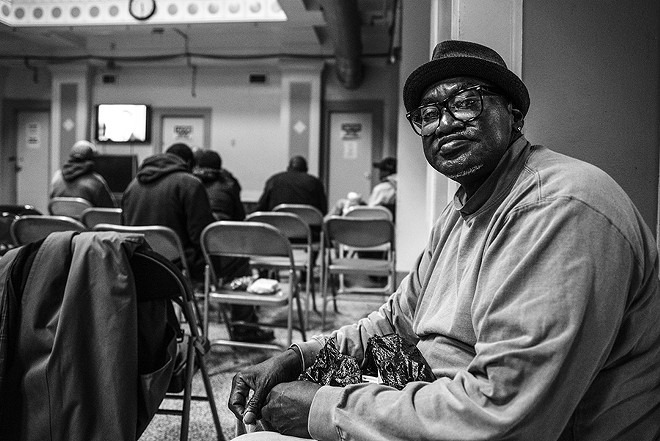 Waldrop has been battling New Life for nearly four years, leading a petition drive and testifying against Rice during a 2013 Board of Public Service hearing that ultimately led to the city's revocation of New Life's occupancy permit. He says Rice's theory that he condones or has any control over the encampments is a lie.

"This is just fucking insane to me," Waldrop says. "This guy, I don't know where he comes up with this stuff."

He says he's called police repeatedly over the years for fights, drug use and public sex acts — all tied to Rice's operation. And it's worth noting that police say, regardless of who complains, they can't just force people off a public sidewalk. That point was reinforced in 2005 when the city paid $80,000 to settle a lawsuit filed on behalf of homeless people who claimed cops illegally cleared them out of downtown during the previous year's Fair St. Louis.

Waldrop, who was a board member for a now-shuttered day shelter, says he and others have tried over and over to get New Life to partner with the city on strategies to help the homeless or at least to make basic improvements, such as hiring full-time, professional security or allowing residents to stay inside during the day. Rice refuses to cooperate or even follow the law, he says.

"I want Larry Rice shut down because he's not helping people," Waldrop says.

The lawsuit filed in mid-November alleges that Rice uses his in-house television studio to attract people from the region to his shelter and tries to amplify problems in the neighborhood "as a core business practice."

"This is an intentional attempt to devastate the surrounding community as well as bait the community into taking actions in response to the vast nuisance created which [New Life] can use to gain media attention in order to solicit donations in order to maximize the financial profits of [New Life]," the suit says.

Waldrop knows he's in for a long legal battle. On this, he and Rice agree.

On a morning just days after the suit was filed, Rice speaks outside New Life to a group of demonstrators who've organized a rally in support of the shelter.

"We've got to stay open," he shouts. "They're trying to slash us with a thousand different knives."

A crowd of about two dozen people has gathered in a semicircle around him. A half-dozen cops look on from down the block. A few people from the encampments wander over.

"This is it," Rice says. "This is the line in the sand. This is the Alamo. This is where we'll make our last stand."