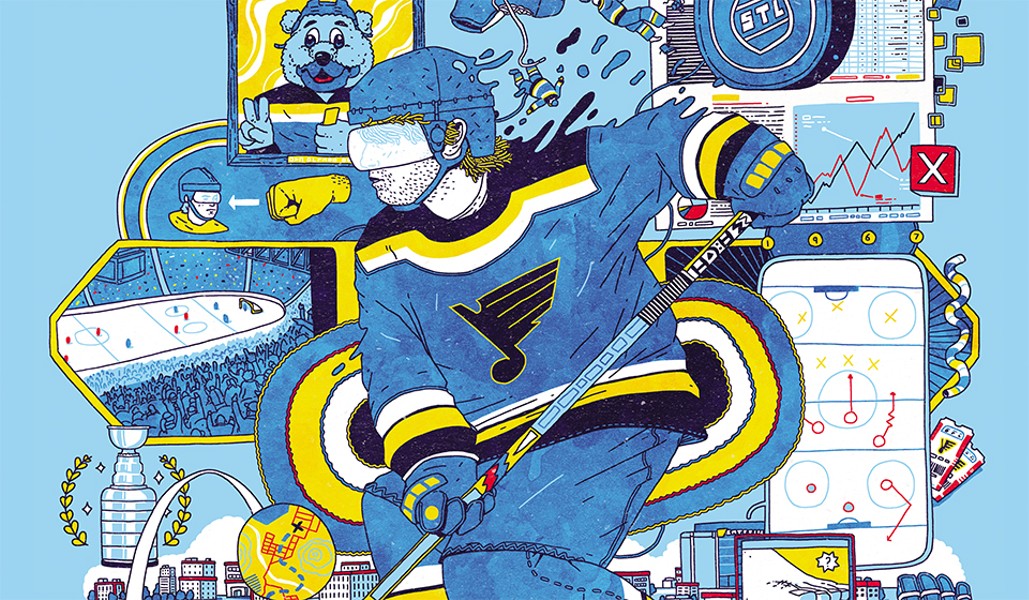 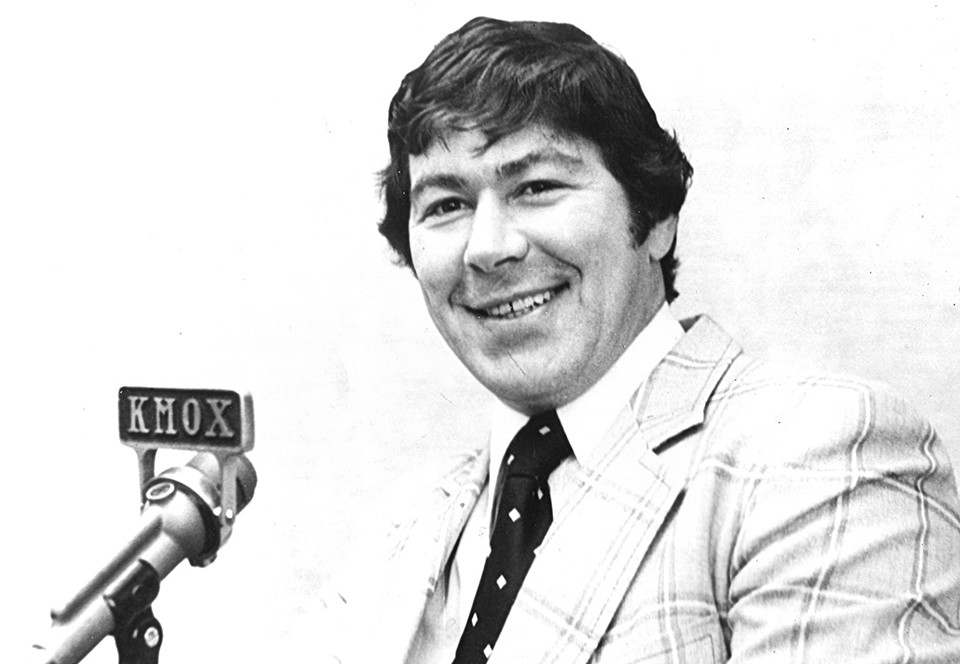 Joseph Jean-Noel Yves Picard was claimed by the St. Louis Blues in the expansion draft of 1967. Born on Christmas Day, the big defenseman was known as Noel by teammates and fans. He had a pretty good right-handed shot and a nasty left hook that took a lot of opponents by surprise. Among hockey fans, Noel Picard is remembered for tripping Boston Bruins defenseman Bobby Orr right as Orr scored the Stanley Cup-winning goal in the 1970 finals, which resulted in one of the most famous sports photographs of all time. Among teammates, Picard was best known for his jovial nature, love of pranks and ability to fire up the team one way or the other.

Before games, Picard would point at teammates and bellow, "This is the team that didn't want you!," a tactic that united the Blues even as it fired 'em up.

Picard was also lucky. He was in danger of having his foot amputated in 1971 after his horse fell on his ankle, shattering it. The doctors were able to repair most of it, allowing him to return to the team for one more year, but he wasn't the same player. The Blues waived him, and he retired a year later.

That's when he assumed his role on the broadcast team as the color guy, next to the legendary Dan Kelly. Games became even more entertaining with Picard in the booth. He referred to everyone as "My goo' frien'," thanks to his Quebecois accent, which got thicker as the action heated up. Picard always had a smile in his voice, which gave even losing games a rosy hue. Many former players have worked the booth in the years since, but when the clock is ticking down and the Blues are threatening to come from behind, Noel Picard's voice is the one that rings in my head. 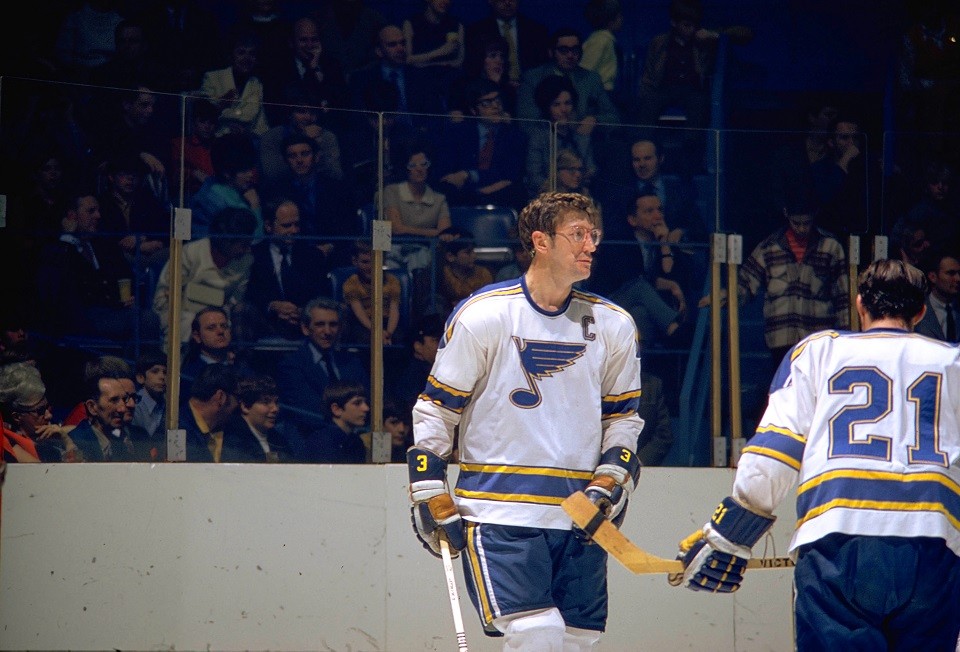 How the Blues Became A Real Team

With the onset of the New Six teams to match the Original Six teams, it was necessary for the league to hold a dispersal draft. In short order, aging vets were shipped out to the new teams, and the Blues ended up with a strange mix of future hall of famers. There was Doug Harvey and his seven Norris Trophies for best defenseman; Dickie Moore; and the legendary goalkeeping tandem of Jacques Plante, who won six Stanley Cups, and Glenn Hall, who played 552 consecutive games between the pipes. Less flashy but no less significant was the arrival of Al Arbour, a rangy centerman who wore glasses on and off the ice.

Arbour played well and became the first Blues player to wear the captain's "C" on his sweater, which meant the team listened to him on the ice and in the locker room. When his playing days came to a natural end, he transitioned naturally into the coach's job in 1970.

It wasn't a smooth ride for old Al. Sid Salomon III, the team's executive VP, had an itchy trigger finger for making player trades and cashiering coaches. By December 1971, Salomon had traded away a huge chunk of the team and had hired and fired Al Arbour, Scotty Bowman and Sid Abel in the span of 62 games. With Abel's departure, Salomon threw Arbour back on the carousel on Christmas Day to ramrod a team whose collective heads were spinning in sixth place in the Western Division.

Everything changed during a fateful trip to Philadelphia on January 6, 1972. (What is it with Philadelphia altering the trajectory of St. Louis teams in midwinter?)

The Blues were down 0-2 in the second period, and Arbour thought the refs were calling a shoddy game. He got on the ice to talk to referee John Ashley at the end of the period, which is frowned upon. Ashley gave Arbour a two-minute penalty, which Arbour shrugged off like an old overcoat. He followed the ref toward the dressing room, at which point someone in the Philadelphia stands poured a beer on Arbour's head.

Bob Plager wasn't going to stand for that. He would later tell Sports Illustrated's Mark Mulvoy that "it was the first time all year someone had stood up for us. It brought us together." As the beer poured into Arbour's ears, Plager only wanted to talk to the goon who dumped it, so he climbed over the glass, with teammates hot on his heels.

On their heels were the riot police, who were swinging nightsticks at anybody in a Blues sweater.

When the dust finally cleared, Al Arbour needed ten stitches, while player John Arbour (no relation) got 40 stitches. Fellow Blues players Floyd Thompson, Phil Roberto and the Arbours were all handcuffed and taken by paddywagon to the Philadelphia police station and charged with assault. (Charges were eventually dropped.)

After that night, the Blues were changed men. Al Arbour's organized practices got the team on the same page, but his willingness to fight the refs (and the city of Philadelphia) lit a fire under the Blues that drove them into the playoffs. There was no fairytale ending, sadly; they were outgunned in the semifinals by the Bruins who shellacked 'em 28-8 in only four games. Where was Laura Branigan when they needed her?

Mustachioed Bernie Federko was the most gifted scorer the Blues ever saw (until Brett Hull), and he had the great misfortune to be completely overshadowed by the once-in-a-millennium talent of Wayne Gretzky. Brian Sutter was one of six rock-ribbed brothers who made it to the NHL, and he was the most pugnacious by far of all of them. Together Bernie and Brian made the team not just successful in the late '70s and early '80s, but a joy to watch. Bernie was a crafty passer and natural scorer who was a magician with the puck. He would set up shop behind the opposing team's net and dish assists to his teammates, racking up more than 50 assists a year for ten consecutive seasons ('78 to '88). Sutter was more of a primal force, scoring 30 or more goals six times in a season and notching more than 150 penalty minutes in those years. Sutter's greatest gift was his ferocious will to win: No player in team history hated losing more than Brian Sutter. He would fight, he would stand in the goalie crease and tip pucks in while opposing defensemen whaled on him with sticks, fists and full-body cross-checks, and he could single-handedly carry the team to victory when they were behind late in the game.

In the 1986 playoffs, the Blues fell behind 5-2 to the Calgary Flames late in game six. Sutter could barely lift his arm above his shoulder because of a lingering injury, but there he was in the crease with twelve minutes left in the game and the season, deflecting in a goal to make it 5-3. Greg Paslawski eventually tied it for the Blues in the dying seconds, and then in overtime Bernie Federko fed Mark Hunter, who's shot was blocked. Doug Wickenheiser potted the rebound and the Blues completed the Monday Night Miracle — the greatest game in team history until 2019 — and forced a game seven that didn't go nearly as well as the preceding game.

The Federko-Sutter years are the greatest era of Blues hockey, at least to my mind, and yet most of the hockey world was watching the Edmonton Oilers run the table. Bernie eventually got the call from the Hall of Fame in 2002, a little late but better than never. Federko's number 24 was retired by the team in 1991, while Sutter's number 11 went into the rafters in 1988, shortly after he retired.