Because We've Invented a Prosthetic Nipple 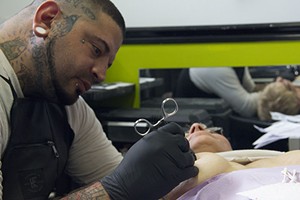 With a face covered in tattoos, Eric Catalano wears his profession on his skin. A body piercer and tattoo artist based in St. Louis and Hecker, Illinois, Catalano also operates a one-of-a-kind service. He restores nipples for women who lost them in life-saving breast cancer surgery.

Crafted from silicone and custom-made to match each woman's body, the prosthetic nipples are a testament to the impact cancer survivors have left on Catalano (find him at eternalink.youcanbook.me).

Starting in 2010, Catalano began tattooing areolas and nipples on women whose breasts had been removed during single and double mastectomies. He listened to their stories about painful skin grafts intended to create new nipples from flesh — but these operations regularly ended in disappointment. Eventually, he'd heard enough. So he applied his own expertise to the problem and invented a solution.

In October 2015, Catalano conducted his first microdermal prosthetic nipple implant on a woman who had sacrificed her nipple in a battle with cancer. Catalano employed the same technique he uses to set jewelry on his customers' skin: A tiny metal post with a socket is inserted just below surface; once healed, the opening serves as an anchor for the bespoke prosthesis.

When he can, Catalano prefers to perform the entire procedure for free. "I feel blessed to have been doing this," he says. With people like Catalano around, we're pretty sure St. Louis can count itself blessed, too.