American Falafel Is a Revelation of Flavor 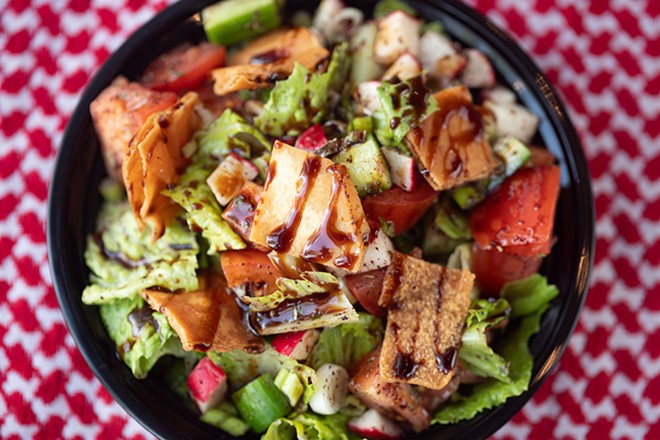 To the outside observer, Mohammed Qadadeh had it all: a successful career with a multinational corporation, financial security, a life filled with international travel. Qadadeh enjoyed all the key indicators of having made it — and yet he still couldn't help but feel something was missing.

He had glimmers of what that void was every time he would travel back to the Middle East for work. A Jordanian native who moved to St. Louis to attend school at the age of seventeen, Qadadeh realized how much he missed the food he grew up on whenever he had the opportunity to eat it while abroad. Though he appreciated the St. Louis food scene and relished trying new places, he longed for a truly authentic taste of home and wished that someone would take a chance on bringing traditional Jordanian cuisine to town.

He never considered that person might be him. However, about three years ago, he was feeling particularly filled with creative energy and in search of an outlet. Though he enjoyed his job and the professional success it brought him, Qadadeh found his entrepreneurial spirit pushing him to try something new. A restaurant made sense, and when he heard that a renowned Jordanian chef was now living in the United States, he encouraged him to come to St. Louis to help him realize his culinary dream.

For two years, Qadadeh and his chef fleshed out a vision of what would become American Falafel, testing out dishes, battling over whose grandmother's recipes were better and seeking out equipment, breads and other ingredients necessary to realize the level of authenticity Qadadeh was not willing to compromise.

Finally, on March 1, 2020, Qadadeh took the leap and signed a lease for a storefront in the Delmar Loop, with plans to open as soon as possible. Then, less than two weeks later, the dining landscape he thought he was entering flipped on its head when the full extent of the COVID-19 pandemic revealed itself in St. Louis. In far too deep to back out, Qadadeh forged ahead, and finally opened American Falafel in May of last year, confident that, despite the challenges posed by the pandemic, he was onto something special. 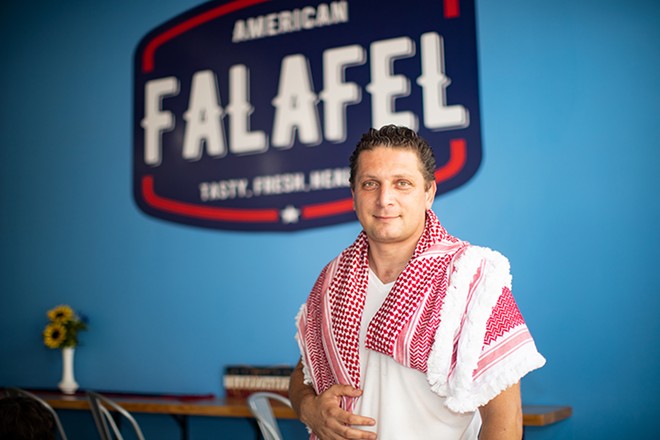 That gut feeling was right. Though St. Louis has no shortage of excellent Middle Eastern restaurants, the fast-casual American Falafel stands out thanks to its focus on Jordanian food; shawarma, hummus, falafel and the typical dishes found on the menus at other Middle Eastern spots are all present, but what's so thrilling is that this particular inflection allows diners to understand the nuances that make each country's cuisine so unique.

Take the falafel, for instance. Like with other versions, you'll find chickpea fritters, tahini, lettuce, tomatoes and other trimmings. However, Qadadeh's makes you understand that all falafel is not created equal. American Falafel's version — which is made using a machine imported from Jordan — is breathtaking, accented with warm spices that season the ground chickpeas throughout the entire fritter. But the texture is what makes it so special. While others can be dry and crumbly, American Falafel's fritters are moist and pleasantly tacky on the inside, soaking in the earthy tahini sauce and juices from the pickles and tomato garnish. Even the bread is special. Instead of the usual pita, Qadadeh uses lavash, which is like a cross between a pita and a crepe; when griddled and pressed, it develops a glorious nutty flavor reminiscent of brown butter. This bread, alone, is reason enough to justify Qadadeh's leap into the restaurant business.

But there are others, too. American Falafel's babaganoush is revelatory, a thick, creamy mash of gently smoked eggplant generously mixed with tahini so that both flavors are equally prominent. Diced tomatoes, sprinkled with tangy sumac, break up the richness. Hummus, another ubiquitous Middle Eastern dip, is a thing of beauty thanks to its silken texture that is completely devoid of any grit from the chickpea. Though so simple in terms of ingredients, he and his chef's fastidious adherence to technique turn the ordinary into something magical. 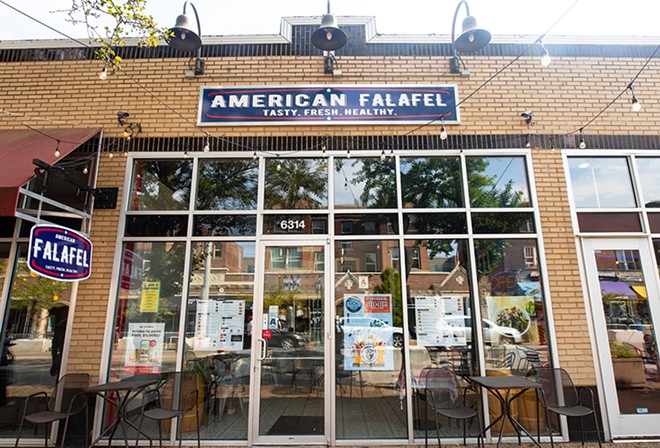 Chicken shawarma is another example of how taking the time to do things right pays off. The wrap features succulent, seasoned meat dressed with lettuce, pickles and tomatoes and served with a garlic sauce that's akin to an aioli. The combination of flavors is powerful; together with the outstanding lavash wrap, it's one of the best versions in the city. Even a simple cheese wrap is otherworldly, thanks to the rich haloumi cheese, pickles, tomatoes and pesto; griddled in lavash, it's like a Middle Eastern caprese wrap.

Though Qadadeh adheres to tradition for most of his dishes, his kefta burger is where he shows ingenuity. Here, the Middle Eastern dish typically served as a kebab over rice or in a wrap is shaped into a burger patty, then placed atop a sesame-seed bun with lettuce, tomato and cheese. It's a work of genius that seems so obvious when you try it.

However, American Falafel is at its most soulful when it's serving the dishes that taste like they came out of Qadadeh's (or his chef's) grandmother's kitchen. Tomatoes galaya, Qadadeh's favorite dish on the menu, may look like simple stewed tomatoes, but the flavor is otherworldly. The tomatoes are cooked down to the point where they nearly break apart completely, absorbing the gentle Middle Eastern spices, generous black pepper and slivers of garlic that season the dish. Served with warmed lavash for scooping, it's a bowl of pure comfort. Likewise, the kidreh rice is the culinary equivalent of a warm blanket. Here, basmati is cooked with chickpeas, onions and whole garlic cloves, then spiced with cumin, cardamom, black pepper and turmeric. There are so many flavors going on, yet they are so well balanced and gentle. It's a masterful dance.

As haunting as that rice is, the Eggplant Amman is the restaurant's unforgettable dish. Here, cubes of sautéed eggplant and pita chips are dressed with a rich tomato sauce that alone would be a worthy offering. However, the component that makes this absolutely transcendent is the thick layer of a tahini-yogurt concoction so creamy and flavorful you'll want to spread it all over everything you eat going forward. The tangy sauce combines with the tomatoes and eggplant, resulting in layers of flavor that make your palate feel like it's tasting in Technicolor.

If Qadadeh ever decides to change course, he could bottle up that sauce and start a condiment empire. Hopefully, he won't do that anytime soon. With American Falafel, he's shown that, in walking away from what seemed like the obvious path, he got to exactly where he was meant to be.