All Is Bright: War makes for a hell of a Christmas story in Mustard Seed's All Is Calm 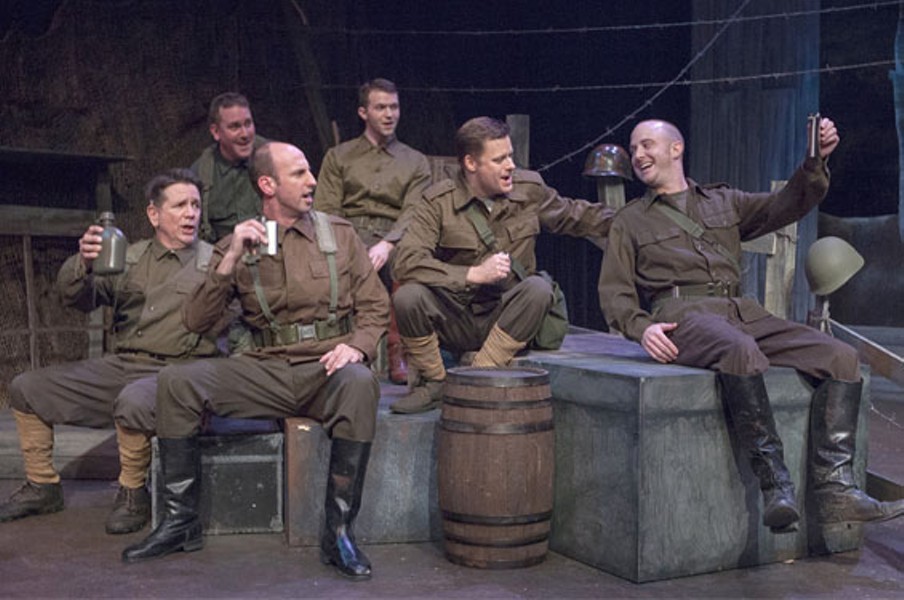 John Lamb Soldiers on opposite sides of the battle lines come together in goodwill in All Is Calm.

All Is Bright: War makes for a hell of a Christmas story in Mustard Seed's All Is Calm

All Is Calm: The Christmas Truce of 1914 is an unusual piece. The dialogue comes from the letters and diaries of actual World War I soldiers on both sides of the conflict, and the music is all traditional folk songs and Christmas carols. There's nothing new here, and yet the show has an undeniable vigor that scores you to the bone; when it's all over, you feel refreshed, almost new.

The a cappella musical is inspired by the spontaneous truces that broke out on the frontlines during the first Christmas of the war. But first, we must get the troops to the front. Under a bruised and ugly sky, director Deanna Jent has the soldiers file out of the darkness while singing a haunting version of "Will Ye Go to Flanders?" as they assemble on stage. It's a ten-man cast comprising seasoned performers and a few fresh faces, and each of them has at least one moment to himself. But this is a true ensemble, and it's when the performers' voices are massed that the show soars. The power of ten men singing unaccompanied is not often brought to bear in a musical, and this cast will make you seek out more of it.

Between songs, individual soldiers step forward to share their thoughts on joining the army, the early days of the war, how they felt when the shooting began and what they were thinking on that lonely Christmas Eve in 1914 when the war briefly stopped for song. These memories come verbatim from the actual combatants, and they're by turns funny, sad, naive and human. "They'll call me a coward if I return, and a hero if I fall," said Patrick MacGill of the London Irish Regiment as he mulled his choices.

The actual truce begins when the Germans will not be denied their Christmas celebration. They set up a little Christmas tree with flickering candles on the lip of their trench, and Tim Schall sings "Stille Nacht" alone as if a fountainhead of peace wells inside him; stars fleck the darkened sky as he advances on the British open-handed and open-hearted. They pick up the refrain in English, and both sides sing "All is calm" in ascending tones into the night. Those three words become incantation and prayer, transforming the ruined earth under their feet into holy ground upon which no blood will be shed.

And for one day, it works. Indeed, it's difficult to believe today that this really happened. The soldiers share small gifts, they joke, they play games and they sing together. The bodies of their dead are removed from no-man's land, and laid to rest at joint funerals. Antonio Rodriguez, as a renowned French opera singer-turned-soldier, delivers a sublime rendition of "Minuit chrétiens (O Holy Night)" that surely must signal the permanent end of hostilities — no one could fight after that, could they?

But the commanding officers of both sides order a stop to the fraternizing immediately — you can't fight a war against your fellow man as well as you can against an inhuman, faceless enemy. And so reluctantly, the friends resume their enemy status and return to their respective positions. Blackness engulfs the stage as the first shot is fired. The only light comes from the guttering candles on the little Christmas tree, and some of them are already winking out.