ICE Ordered Alex Garcia to Report for Deportation. He Took Sanctuary in a Maplewood Church Instead

He is still there. He may be there for a long time — or maybe a short time. There is really no way to tell. The 36-year-old construction worker is hoping to return home to Poplar Bluff, Missouri, in time for the holidays. Even weeks ago, Thanksgiving had begun to feel like a long shot. But maybe Christmas. Christmas would be wonderful. He, his wife and his five kids get together with his in-laws and eat tamales on Christmas.

It's one of the rituals he has adopted during his thirteen years in the Bootheel. Bow hunting deer in the fall. Fishing with the kids in the summer. And work. Work is all the time. Work is how Garcia, an undocumented immigrant from Honduras, earned the respect of white, blue-collar guys in Butler County, where Donald Trump won 79 percent of the vote.

Bald with a bushy beard that sits low along his jaw, Garcia is a quiet force on the job site. Other contractors and business owners describe watching him crawl over roofs or pour concrete all day before he heads off to mow grass on his nights and weekends. They know he has five kids to support, and they respect him for doing it without welfare — which, they are quick to point out, is more than they can say for a lot of their neighbors.

"You need to get rid of about half the people in this town and keep him," says Jamie Tyler, a 38-year-old railroad worker who also runs his own construction company.

There is no guarantee Garcia is coming back to Poplar Bluff. In fact, the odds are not great. After granting him temporary permission in 2015 and 2016 to stay in the country, Immigration and Customs Enforcement officials denied his request for 2017. It is part of a new hard-line approach on undocumented immigrants.

The agency notified him of its decision in a letter sent at the end of August. Garcia's wife opened the envelope on her lunch break and called him in a panic. "I was a little panicked, too," Garcia recalls, carefully choosing the English words. "But I was trying to tell myself it was going to be OK — one way or another, everything was going to be fine."

All across the country, undocumented immigrants are getting similar messages from ICE. The agency is under new directives to broaden the scope of its enforcement efforts. Trump, who campaigned on promises to deport all the "bad hombres" from the U.S., issued an executive order in January that expanded the focus from people who are national security threats to virtually anyone who has crossed the border without permission. Even those, like Garcia, who have been previously vetted and granted stays multiple times in the past have been targeted.

Now, his future is uncertain. His wife and kids are American-born citizens. Honduras, which has one of the highest murder rates in the world, is not a realistic option for his family, he says. If he's deported, he will be required to wait ten years before he can be considered for legal re-entry. What happens to his children, Garcia wonders. His youngest is three. His oldest, 12-year-old Ayden, was diagnosed in 2014 with Asperger Syndrome.

"They need me right now," Garcia says, adding later, "They always going to need me." 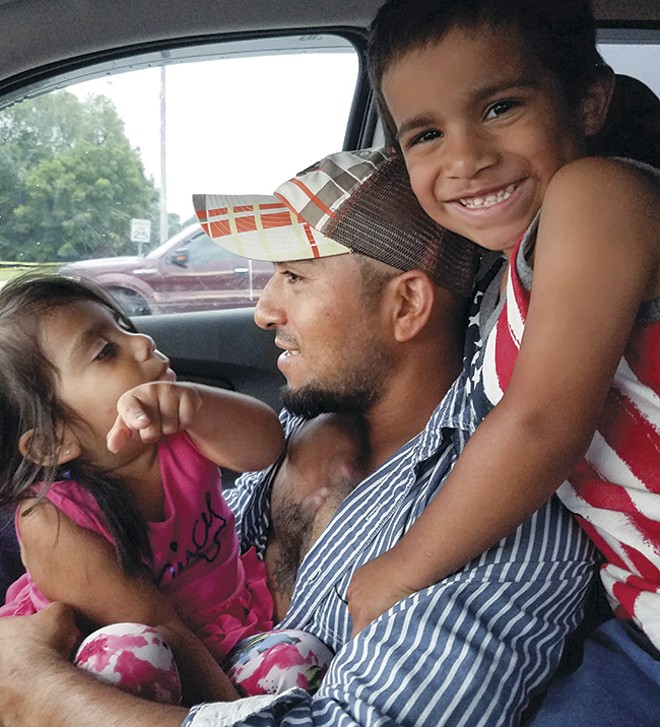 Unbeknownst to Garcia, a loose network of religious leaders in the metro area had anticipated a situation like his — and they had already begun making plans.

The roots of what is now known as the St. Louis Coalition for Sanctuary started with meetings and discussions in February. Trump's executive order regarding ICE enforcement priorities was barely a month old, and his administration was also making plans to beef up U.S. Border Patrol and phase out Differed Action for Childhood Arrivals, or DACA, the Obama-era policy that granted certain permissions to young undocumented immigrants brought to the U.S. by their parents.

"It's laying the foundation for mass deportations," says Sara John of the St. Louis Inter-Faith Committee on Latin America.

Searching for ways to push back, the group began considering sanctuary as a possible option. The concept is thousands of years old and is basically an agreement that law enforcement officers won't barge into a house of worship and start hauling out fugitives. In medieval England, noblemen sometimes took refuge inside churches for weeks at a time while they tried to negotiate with angry lords. A modern-day movement turned toward immigration in the 1980s when thousands of people fled bloody, U.S.-backed civil wars in Central America. Angry that then-President Ronald Reagan was loathe to grant the newcomers status as political refugees, activists and religious leaders set up networks of churches to serve as safe houses.

The Rev. Noel Andersen of Church World Service, which tracks the movement, says the difference between now and the 1980s is that the people taking refuge today are already here, often living and working peacefully in the country for years before they claim sanctuary.

The policy shift under Trump has simultaneously put those people in danger of deportation and sparked new levels of activism in supporters, he says.

"I think that we've seen there's a real increase in the number of people in the country that understand we need DACA, we need a path to citizenship," Andersen says.