PHOTO BY MABEL SUEN Albadia's lamb chops live up to its boast: They really are "cooked to perfection."

In my years as a restaurant critic, I've come to realize there is one piece of dining advice that should be codified in stone: If you're ever perusing a menu and come across a dish that is simply called "garlic," do not hesitate and do not question. Just order it.

Case in point is the "garlic" at Albadia, the five-month-old Middle Eastern restaurant located in St. Peters just on the edge of Cottleville. The dish comes with no explanation, just a simple name, list of ingredients and a price, and when asked to describe it, our server curtly said, "It's garlic." Had she given us a dissertation on the subject, however, it still would have failed to prepare us for the glory that descended upon our table. What looked like lily-white custard was in fact a savory dip, a cross between cream cheese-like labneh and toum, the Lebanese condiment made of whipped garlic and oil. Dip into it with warm pita bread, and the concoction reveals its fluffy, cloud-like texture, fortified with an olive oil drizzle, some cracked black pepper and sumac. Pungent and soft, silken and light as air, the dish made me realize why the folks at Albadia didn't bother giving it a name: It transcends words.

If I had any reservations about the quality of Middle Eastern food that could come from a St. Charles County strip mall, Albadia's "garlic" assuaged those concerns. The rest of the meal then not only put those doubts to bed, but converted me into a true believer. And I'm not the only one. In a few short months, Albadia has developed a loyal fan base that has been singing its praises to anyone who will listen. The falafel, the hummus — if you read the online reviews, you detect an almost religious fervor in the tenor of the comments.

At first, I wondered whether the excitement surrounding Albadia had to do with a lack of proper Middle Eastern spots west of the Missouri River — a factor that influenced owner Abed Qasam and his brother-in-law Abli Kafla to open the restaurant in the first place. A former chef at the Grand Park Hotel in the West Bank city of Ramallah, Qasam saw a need for authentic Middle Eastern food in the area. He opened his first restaurant, Kaslik Mediterranean Cuisine, in Hazelwood around 2007 and developed a loyal following for his takes on Palestinian-inflected cuisine. 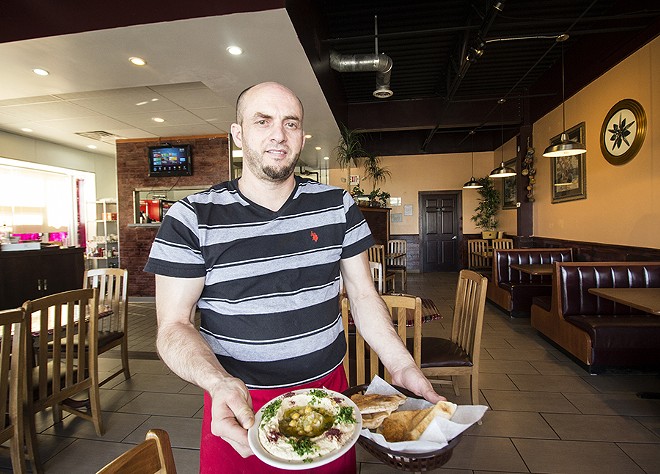 The problem was, much of Qasam's following came from Chesterfield and St. Charles County, and these customers often lamented having to drive all the way to north county to enjoy his cooking. Answering the call, Qasam and Kafla opened Albadia in St. Peters this past March in an inviting space just off Mid Rivers Mall Drive near the Page extension. Though the restaurant's prices are reasonable, this is no mere grab-and-go spot (though you can do that too). Instead, the partners have created a warm, open dining room that invites guest to linger. Red tapestries decorate the walls, tables and ceilings, giving diners a comfortable — and closer — option for enjoying their food.

Not that you wouldn't drive to the ends of the earth to eat that "garlic," which turns out to be a mere precursor to the many other luxurious dips Qasam and Kafla prepare. In place of plain roasted eggplant for their baba ganoush, the partners grill the vegetable, imparting a deep, smoky flavor that infuses the dish. The effect makes the baba ganoush so robust, you wonder if in fact you are eating a meat-laden barbecue dish.

If you insist you've had good hummus, Albadia's version will make you eat your words. How Qasam and Kafla can get such a silken texture from what's basically a chickpea puree is astounding: The hummus is completely void of any chunks. It's pure velvet. A generous helping of tahini gives the dip a round, earthy flavor positively laden with garlic. If you prefer spice and texture, the hummus serves as a base for the foul moudamas, which pairs whole chickpeas with pepperoncini-spiked olive oil; the addition turns what is already an excellent appetizer into a deceptively fiery meal.

Albadia's falafel is some of the best in the area. Instead of the typical hard, thick exterior, this version is crisp yet delicate. It surrounds a soft, garlicky interior that is moist and fluffy. It's good enough to enjoy as an appetizer on its own, simply dipped in tahini, though wrapped into a pita it also makes a satisfying sandwich.

Another excellent sandwich option is the chicken shawarma, which pairs hunks of tender, spit-roasted chicken with tahini, pickles, lettuce, onion and tomato, then wraps it all into a pita. So often, chicken shawarma can be dried out, but Albadia's is surprisingly succulent and well-seasoned. Beef shawarma, served as a sandwich or on a platter with rice, is equally tender and well-cooked, unlike the dried-out jerky that is so often passed off as this delicacy.

The ground kefta kebab is another excellent beef option. The meat, seasoned with garlic, parsley, onions and spices, is the texture of breakfast sausage, but so much more flavorful. Here, it is served with basmati rice, though I can only imagine how wonderful it would be as a filling for pita.

Albadia's menu claims that the lamb chops are "cooked to perfection," an oft-empty tagline that graces the pages of many menus. Here, there is substance to that claim, as shockingly tender lamb chops ooze their marinade and juice over spiced basmati rice. The marinade is simple, allowing the mild flavor of the lamb, kissed with grill char, to shine through. You won't find a better cooked piece of meat at even the city's most expensive steakhouses.

You can get the lamb, together with quail chops (when available), kefta, beef and chicken kabobs, beef and chicken shawarma and five different appetizers as part of Albadia's family plate — a monstrous feast that contains all the beauty of this delightful restaurant in one heaping platter. Chesterfield, St. Peters — heck, even Memphis — seem like a reasonable drive to experience something so wonderful.

I'd say that this sampler platter distills everything wonderful about Albadia onto one plate. And it's true, but you don't have to go that over the top with your order. Simply ask for a simple dish of "garlic" if you want to know what makes this hidden gem so special. Just don't expect to be able to talk much about it: Something this wonderful is beyond words.