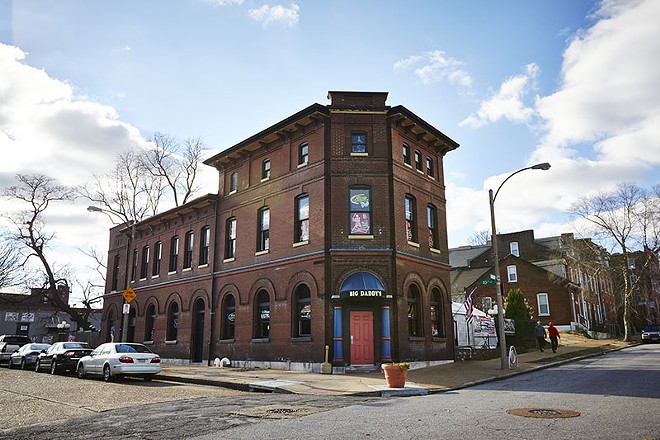 Burkhardt's story about the rats goes like this. In the early '70s, as demolition claimed dozens of buildings on downtown's northern edge, countless rats fled from those falling structures. The area, being cleared for the convention center, was no longer hospitable for the rodents, who found themselves up and moving, en masse, toward another edge of downtown: Laclede's Landing.

With Gaslight Square's final mainstay, O'Connell's, relocating to south city in 1972, Burkhardt had settled on the Landing as the next, best location for developing a true nightlife zone.

The realization of that idea came slowly, however. Blossoming into something like a cohesive work/play district by the 1980s, the area's warehouses and industrial spaces were just mismatched, abandoned shells when Burkhardt set his sights on 724 North First Street.

"Doing Muddy Waters, I didn't have enough money to get it open," Burkhardt recalls. "It was just a warehouse before. We opened up with Johnny-on-the-Spots for bathrooms; we had to see the mayor to get permission for that, which would never happen again. That's old school.

"The Landing back then was nothing but warehouses and rats," he reminisces. "A lot of rats. As they took down all of the building for the convention center, there were so many rats that you couldn't believe it. I guess the city came and took for care of it after a couple of months. But at first you'd drive down the street and see ten of 'em, fifteen of 'em, every street."

O'Shaughnessy seconds the story. Of the Landing, he says, "except for the rats on the street and the people shooting off guns, it was pretty much deserted."

Rusty Springs was a smash hit by then, and Muddy Waters would quickly become another destination for rockers, attracting a twenty-something audience and a booking policy that brought in "pretty good acts, like .38 Special, the Outlaws, a band from Chicago called the Flock."

As with his other venues, Burkhardt exited stage right long before the venue shuttered. New owners ran Muddy Waters for decades, until the building flipped over to a chain called Show-Me's Sports Bar & Grill.

But with the Landing now in ascent, Burkhardt's vision turned toward another rundown part of town: Soulard. This time, he approached his projects with reputation that preceded him and a right-hand man.

Burkhardt's creative partner in crime was known to all by the nom de guerre of Johnny Rio. Rio owned a Central West End second-hand store with a legendary Gaslight Square drag queen Lady Charles — and he also formed a symbiotic, colorful relationship with Burkhardt.

"Everything was opened on a shoestring," Burkhardt says. "We never had any money."

Art Dwyer, founding bassist of the Soulard Blues Band and a friend of Burkhardt's since the 1970s, says, "They were a tandem. Bob had a contractor's side to him. And Johnny had the Blind Pig up on Euclid with Lady Charles — a place with antiques, clothes, all kinds of odds and ends. Johnny was really good at accruing merchandise. The two went hand in hand. Did you happen to see BB's when it opened up? It was just like Joe's Cafe, very much like it. So much stuff in there, along with this stage for music. There was stuff just hanging all over the place."

Maher says that Burkhardt "loved Johnny Rio like a brother." Even today, Burkhardt's home is filled with photos and paintings of his late running buddy, who died about a decade ago.

It was Burkhardt and O'Shaughnessy, with a big dollop of Rio, who put together the original BB's. First opened in the late 1970s, it would reopen in the 1990s after a couple of closures and a three-year run as the legendary rock room the Heartbreak Hotel. The long, lean building at 700 South Broadway has seen a lot in its century-plus of life.

Burkhardt remembers that the original BB's was preceded by a low-budget residence called Phil's Hotel Number 2. That's the business that he and his partners initially walked into in 1976, before beginning the process of carving out a blues listening room there. Though Phil's Hotel had a bar intended for the needs of the pensioners living above, it was just a bare-bones tavern. Modern amenities weren't exactly in high supply inside the upper stories, either.

Says O'Shaunghnessy, "It was a flophouse, basically, for over-the-road truck drivers. They'd have a particular girlfriend that they'd shack up with for a week. They'd entertain themselves and have a good ol' time — not that I would've have found that a good time. There wasn't much in the way of food there. It was Landshire sandwiches or it was liquid bread."

But the space's future owners were already hooked.

"We were going in as customers," O'Shaughnessy remembers, "digging the cheap liquor."

"When we first opened BB's, it was a 37-room hotel," Burkhardt says, free-associating. "There was a maid that worked there for 23 years, Vera. It was a hotel, but had the showers and toilets down at the end of the hall, except for rooms 25 and 23. They had toilets in the rooms. There were two hookers who lived and worked there. One of them was Goldie. She had a song that she'd always play on the jukebox..."

It's enough to make Maher emit a loud laugh.

"I don't know," he says. "I remember things from when I was a kid. But I don't remember what I did last week."

And sometimes he loses his phone or drops it in a tub of water. And then Maher comes out to check on him. Then days like this happen. Memories flow.