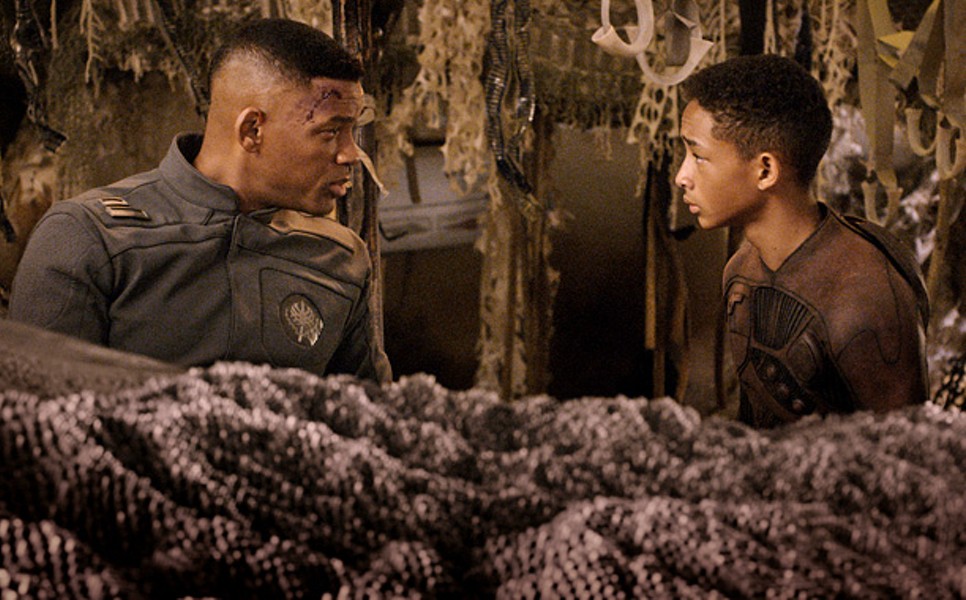 After Earth
Directed by M. Night Shyamalan
Columbia Pictures Opens May 31

The surprise twist in the new M. Night Shyamalan film is that the film is directed by M. Night Shyamalan, a fact that the movie—like the posters and commercials—won't admit until after you've already sat through it. While at heart a Pinkett-Smith family bonding project, the kind of sci-fi play therapy Big Willie and son would get up to if they had a holodeck, the dreary After Earth still bears the stamp of its once-beloved director's authorship.

There's the handsome scenecraft, those smartly constructed revelations and jump scares, often sprung on you in a shot that seems to be about something else entirely. (Recall the kitchen drawers and cabinets that suddenly all open in The Sixth Sense—and recall that young writer/director's promise.) There's that glum high seriousness, those characters whose urgent feelings go unexpressed out of some constipating self-involvement that they—or Shyamalan—mistake for stoicism. There's that endearing insistence upon lit-class symbolism, no matter how vague or risible. One meaningful sequence here, about the universal desire of parents to nest their young, is a straight-up story-wrecker, a bit of bedtime story fancy so at odds with the film's post-apocalyptic horror that it's like if the kid in The Road escaped the flesh-eaters by hitching a ride on a Snuffleupagus.

And, most tellingly, there's Shyamalan's principled refusal to subordinate his ideas to mere narrative logic. Just minutes after being told that the planet he's crashed-landed on undergoes a fatal hard-freeze every single night, the hero leaps into a river. The water does not seem uncomfortable.

That freezing is just one of many story elements we just have to take the movie's word for, like the human-bred monster who can't see but can smell fear, or the idea that far-future space warriors would fight said monster with an unlit, totally analog, double-bladed Darth Maul-style lightsaber stick. Will Smith and his son Jaden play two such space warriors, crashed on a mysterious, hostile planet. (Just guess which.) Papa is laid up, so the kid is dispatched to have the adventures this time, with Smith the elder literally handing Smith the younger a baton.

The kid has to dash through some 100 kilometers of verdant, animal-teeming Mystery Planet That Oh, Yeah, Freezes Every Night. He has to do this for the same reason that Laura Dern must head to Jurassic Park's maintenance shed, or that Super Mario must hop through 8.3 worlds: just because. From their downed spaceship, dad follows his son's progress on a screen and guides him toward geothermal “hot spots” where the kid can sleep, safe from those temperatures that would kill him even as they don't faze the flora.

Shyamalan filmed this adventure in the California Redwoods and at a black-sloped Costa Rican volcano, meaning we get Endor and Mordor and the cover of Dianetics all in the same movie. The look is marvelous, especially in the location shooting, and especially when young Smith has no CGI critters to contend with. Scenes of a panicky Jaden picking his way through foreboding woods are legitimately suspenseful but fleeting—there's always some cartoon chase or impossible waterfall or—again and again—some contrivance to knock the kid out cold. The Mystery Planet might just be Oz's poppy field. Meanwhile dad—stern, joyless, the Fresh Prince now a dour warrior king—grumbles ridiculous homilies at him, junk cribbed from acting classes, Scientology, and Tom Cruise's scenes in Magnolia: “Root yourself in this moment now. Stop, smell. What do you feel?” And, bafflingly, as if they're taking improv together, “Recognize your power: This will be your creation.”

Jaden is fine at running, jumping, fearful trembling, and affecting steely resolution. He doesn't yet have his father's charisma; perhaps to help him out, dad opted not to bring that charisma to the set. I fear Jaden might face online wrath for his performance here, especially thanks to the numb-tongued Kiwi accent he's forced to adopt. He's not bad, especially, but he is a kid asked to do the extraordinary: compel us as he pretends to do ridiculous bullshit. As Will Smith coldly instructs him to feel, to root in this moment now, to master his own creation, I felt the purest horror I ever have at a Shyamalan film: What if this is what Jaden Smith's life is actually like?

FINAL SPOILER THOUGHT FOR TERM-PAPER WRITERS: The eagle represents that universal drive of parents to nest their young and then just lie there and die like dopes.

After Earth is not showing in any theaters in the area.