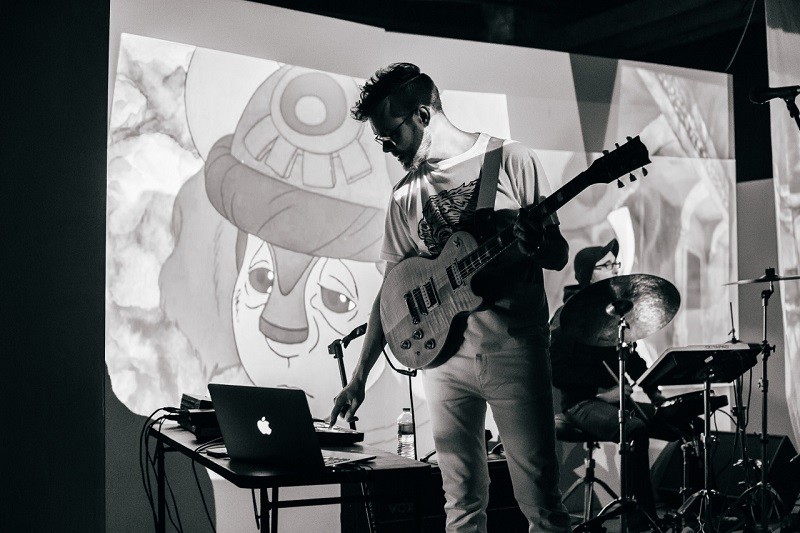 By nature, a beatmaker's job is transactional. The producer constructs a track and then hands it off to a rapper or emcee to complete the composition. And when the St. Louis music community first got to know Ryan McNeely, he fit this role well, creating tracks for artists including Rockwell Knuckles and Tef Poe. But along the way, his project Adult Fur became less about creating backgrounds and more about stepping into the foreground; his releases from earlier in this decade showed McNeely to be not just an inventive, genre-blurring producer but a creator of delicate, dreamy and challenging pop music.

Now, in his first full-length release since the 2012 collaborative remix project RÁN, McNeely has constructed a dystopian feminist epic in µ. He's stepped forward as a vocalist on this album, though he's still somewhat dependent on guest vocalists and rappers to front many of these songs — along with the aforementioned Poe and Knuckles, Mvstermind, AtM, Sixela Yoccm and Damon Davis all contribute to individual songs, which, when taken together, outline a story with a grim outlook on human advancement.

On µ (the Greek letter "m," pronounced "myu"), McNeely uses a sci-fi premise to address real-world issues of inequality. "The preface is based on my opinion of the current trajectory of humankind in an existential way; I think we're doing a terrible job of existing," McNeely explains. "One of the biggest impediments to our progress is how we oppress half of the human race, and by that I mean women."

The arc of the album is too knotty to explain fully in this space, but McNeely says that the opening title track "is basically about the world is coming to an end and everyone trying to jumpstart the next phase of human evolution." Two women offer themselves up for the good of humanity, destroying their earthly form but combining into one being. This is µ, the character voiced by McNeely on the album; her journey through the wasteland will determine the future of the human race.

How deeply the listener wants to delve into this story may differ from person to person — the storyline is not overwhelming or didactic in the way that rock operas tend toward. What's more immediately engaging is McNeely's cinematic approach to his songs, which have a more lush and grandiose quality this time around. His synth-scapes owe a little to Vangelis in their resonant, wiggly warmth, and his beats range from punchy to minimal.

To tell his story, McNeely has relied on his hip-hop peers to serve as guides for the main character. "The rappers — I call them oracles — are meant to be the people left behind, trying to warn her not to make the same mistakes," says McNeely. Luckily, his contacts represent many of the finest and most adventurous lyricists in town.

"Since I had a very distinct vision for the content, I told every person on this record the same story, and told them what their character was supposed to be," says McNeely of the writing process. The songs, most of which are titled by their sequential Roman numeral, were conscientiously paired with each singer; on "iii," Damon Davis warns µ of the dangers of organized religion. For "v," McNeely gave Mvstermind a purposely shifting, unsteady beat. "I knew he was really skilled and I wanted to push him and see what would happen," says McNeely.

If listeners are used to hearing Adult Fur as a backdrop for hip-hop vocalists, the album's real revelation is McNeely's ownership of these tracks. He remains a compelling vocalist, more in league with the kinetic, world-making performances of Kate Bush than the outre hip-hop he's often associated with. On lead single "Colors," he oscillates between rhythmic dexterity and emotional abandon, almost as if he's in a constant duel with himself.

But for an album that sprung, in large part, from McNeely's frustration with society's mistreatment of women, it would have been fitting to have more female voices present on the album, Sixela Yoccm's contributions notwithstanding. Perhaps McNeely's embodiment of the main character, which he refers to as a female entity, speaks to the emptiness of the traditional gender binary; his voice has always had a gender-bending quality to it, both in his higher-register range and the spongy mutability of his own performance.

µ is a thorny storyline buried beneath a beguiling album, and at times it's difficult to parse, especially from an artist more often associated with making tracks than grand statements.

"I've been really lucky to be surrounded by family members to push me to explore culture and literature and music and to be uncomfortable," says McNeely, who freely admits to transferring his own discomfort to his listener while still seeking what he calls "a transient sense of community" in his live shows.

"For me, it's causing them to question their own existence," says McNeely of his ideal listener. "I am somebody who contemplates his own mortality on a regular basis. I can enjoy things more and not take things for granted."