A Night Owl's Guide to St. Louis After Dark

PHOTO COURTESY OF FLICKR/PAUL SABLEMAN When darkness falls, head downtown to Flamingo Bowl.
The darkness comes for us all, so why not enjoy it? Whether you’re stretching last call, peddling into the wee hours of the morning or hunting for some food to soak up the booze, St. Louis has plenty to offer after night falls. You just need to know where to go.

Start with the bars. Fun-killing liquor ordinances force most drinking establishments to close at 1:30 a.m., but there remain a healthy sprinkling of 3 a.m. spots that specialize in the nightcap. These stamina testers fill up in the final 90 minutes, but they are perfectly good for an earlier arrival, too.

Make a night of Mike Talayna’s Juke Box Restaurant (1115 Hampton Avenue, 314-647-7600). The Dogtown gem has all the charm of a tire shop from the outside, but that’s nothing more than the perfect disguise for the neon insanity waiting inside. Dozens of disco balls spray pink-purple light across a nightclub dance floor worthy of its spectacle-loving, champion-jitterbug-dancing namesake, the late Mike “Talayna” Faille. Sing karaoke, dance and eat pizza until you stagger back into the outside world wondering what the hell happened.

For something a little less disco, join the regular procession of south siders to Mangia (3145 S. Grand Boulevard, 314-664-8585) in Tower Grove South. It’s a pretty solid Italian restaurant that stays up later than the other South Grand eateries, morphing subtly toward low-key party spot as the night goes on. There’s an extensive wine list, good draft beer selection and a wide range of live music. A bar menu runs until 3 a.m. There’s no shame in pounding a $5.50 Lo-Brow special (a Stag and a shot of Ten High) at last call and then returning a few hours later for Sunday brunch.

Lovers of alcohol-fueled sports might want to check out Pin-Up Bowl (6191 Delmar Boulevard, 314-727-5555). Roll until 2 a.m. surrounded by 1940s-era kitsch in the Delmar Loop bowling alley. The kitchen closes at the same time as the lanes, and you’ll still have another hour to gather yourself in the bar before they throw you out. Downtown’s Flamingo Bowl (1117 Washington Avenue, 314-436-6666) keeps the same hours for your bowling pleasure.

The classy “Ping Pong Parlor” in the basement at Brennan’s (4659 Maryland Avenue, 314-497-4449) combines one of the Central West End’s great bars with one of the world’s underappreciated athletic pursuits, elevating both. The deep red tables are set cinematically against dark stone walls with a black-and-white print of Muhammad Ali punching Joe Frazier in the mouth for inspiration. Closing time is 1 a.m., so be swift, be decisive, be victorious.

But maybe you’re the type who likes actual, widely-recognized-as-exercise activities. Sign up for the Moonlight Ramble (moonlightramble.com). Started in 1964 with just one rider, the annual bike ride now attracts thousands of cyclists for a midnight cruise through city streets. The route shifts year-to-year and is kept secret, adding to the intrigue. It is not a race — more like a bicycle love fest or a rolling costume party. Riders have until 3 a.m. to ramble either 10.5 or 18.5 miles. The sooner you finish, the sooner you can hit the after-party.

Of course, there’s something to be said for sitting on your ass in front of a giant movie screen. Late Nite Grindhouse at Moolah Theatre and Lounge (3821 Lindell Boulevard, 314-446-6806) shows classic (and not so classic) horror and slasher flicks at midnight. The single-screen theater, a former Shriners temple near the edge of the Saint Louis University campus, is alone worth a visit. General admission tickets for $7, plus a bar with movie-themed drinks and a pre-show with vintage trailers, make it the perfect place to see The Return of the Living Dead or My Bloody Valentine for the first or 27th time.

Alternatively, another of St. Louis’ great movie houses, the gorgeous Tivoli Theatre (6350 Delmar Boulevard, 314-727-7271), offers a spring run of late-night shows for film buffs. The eclectic lineup of the Reel Late series has in the past included cult favorite Rocky Horror Picture Show, David Bowie as the goblin king in Labyrinth and Pulp Fiction. 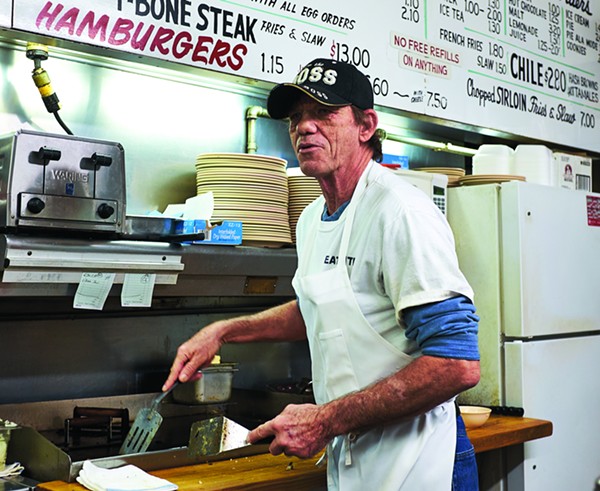 After you roll out of the theater, bar or wherever the night has drifted, the next move is food. Doughnuts are always a good choice, and John Donuts (1618 S. Broadway, 314-241-3360) serves some of the finest in the city. Located on a blue-collar stretch of union halls, warehouses and hardware stores just south of downtown, it’s extra convenient if you happen to find yourself over-served and underfed in Soulard. On the north side, there’s Old Town Donuts (508 N. New Florissant Road, Florissant; 314-831-0907). It’s open 24 hours and hard to beat.

To truly make it a full day in St. Louis, you’re going to need to eat a slinger. Eat-Rite Diner (622 Chouteau Avenue, 314-621-9621) is a short walk under Interstate 64 from Busch Stadium and arguably the city’s best destination if you’re grading on a stories-per-square-foot curve. Generations of local celebs, politicians, cops and crooks have crowded into the thirteen-seat diner for more than four decades. You won’t be the first or the last, but the shit-talking staff will treat you right.

Any of the Courtesy Diner locations are also a fine choice, but for a more upscale coffee shop, hit the Benton Park Cafe (2901 Salena Street, 314-771-7200). Serving a tasty menu of American fare, the cafe stays open 24 hours on Friday and Saturday. So does Coffee Cartel (2 Maryland Plaza, 314-454-000), and it’s a great place to watch the Central West End party crowd stumble on home.

Sober up as the sun rises, but if you just can’t bear to see the party end, there is always the East Side. The string of skin clubs and their “Ballet du Sauget” lure legions of bleary-eyed patrons across the river, but Pop’s Night Club and Concert Venue (401 Monsanto Avenue, Sauget, Illinois; 618-274-6720) is the true destination for the endless night. The massive club holds the rare 24-hour liquor license, hosting metal and hip hop shows, traveling DJs and juggalos.

This is your spot to hide from the day. The crowds thin as the working world grinds forward outside, but hunker down. It will be night again soon.