NICHOLAS COULTER Brock Seals, on roller skates, works on one of the murals.

When Washington University selected art collector and artist De'Joneiro Jones to lead the painting of the South 40 Underpass on the Danforth Campus, he assembled a group of local talents.

Under his supervision, the artists transformed the walkway while subtly educating passersby about elements of art and various art movements throughout history with their own version of a 2020-styled public art display. The work as a whole might be described as a step beyond abstract expressionism into historical artistic activism. Each of the works spanning the 22 massive panels — measuring six feet high by six and a half feet wide — reflects the individual artists' creative process, design and personal style. What is astonishing is that the project in its entirety was completed and documented in just eight days.

If you are familiar with the South 40 Underpass, a walkway that connects the main campus to the section where you find the bulk of student housing, you will first recognize some changes to the cube, sphere and pyramid grouping that sits at the north entrance of the underpass. The flowing paint of the sphere evokes images of the development from abstract expressionism to a style known as color field painting. (An example of this style is Morris Louis' Beth Feh.) The painting of the sphere by local artist Brock Seals presents itself with a background of colorful, ribbon-like veins of flowing paint untouched by brush or roller yet representing the melting of our planet, the burning of our forests, the rising of our seas and an urgent need to end global warming.

The cube was painted by Jones to focus on the landmark Francis Olympic Stadium at Washington University with its historic reinforced concrete stands for the 1904 Summer Olympics and the medals won there. The gold and black pyramid was painted by Roland Burrow to remind us of "the golden calf and the powerful image of the pyramids."

Upon entering the underpass, there is a Chadwick Boseman panel painted by Seals on the west wall. It reminds the viewer, in Boseman's words, "The Struggles Along the Way Are Only Meant to Shape You for Your Purpose." Boseman died August 28, 2020 at the age of 43. The internationally renowned actor played superhero Black Panther as well as historical figures such as Thurgood Marshall, Jackie Robinson and James Brown. Boseman continued to work while undergoing four years of treatment for colon cancer. Seals' choice of the Boseman quotation speaks not only to the student population but also to the community as a whole.

The next series of panels was designed and painted by St. Louis artist Danny McGinnist Jr. The panels can be viewed as stand-alone panels or as a unit anchored by the portraits of George Coleman Poage and John Robert Lewis. Poage was the first African American track and field athlete to win Olympic medals in 1904 on what is now the university's Francis Olympic Field. John Robert Lewis was a civil rights leader and longtime member of the U.S. House of Representatives. He helped organize the 1963 March on Washington and was a leader along with Dr. Martin Luther King Jr. of the marches across the Edmund Pettus Bridge in Selma, Alabama. Between these portraits of courage and power, McGinnist has painted images from his "Roots and Petals Series" that celebrate flowers with their rooted beginnings and emphasize their ability to grow strong and weather any storm, much like Black people "persevere through adversities to create our own legacies." The central panels have a feeling of movement as the pollen that McGinnist painted floats across the surface of the painting, in keeping with how the commitment of Poage and the "good trouble" of Lewis led to change in the United States. Action painting was popular during a period following World War II when censorship of artists and the McCarthy era brought the need for abstraction to the foreground much like it is needed today. 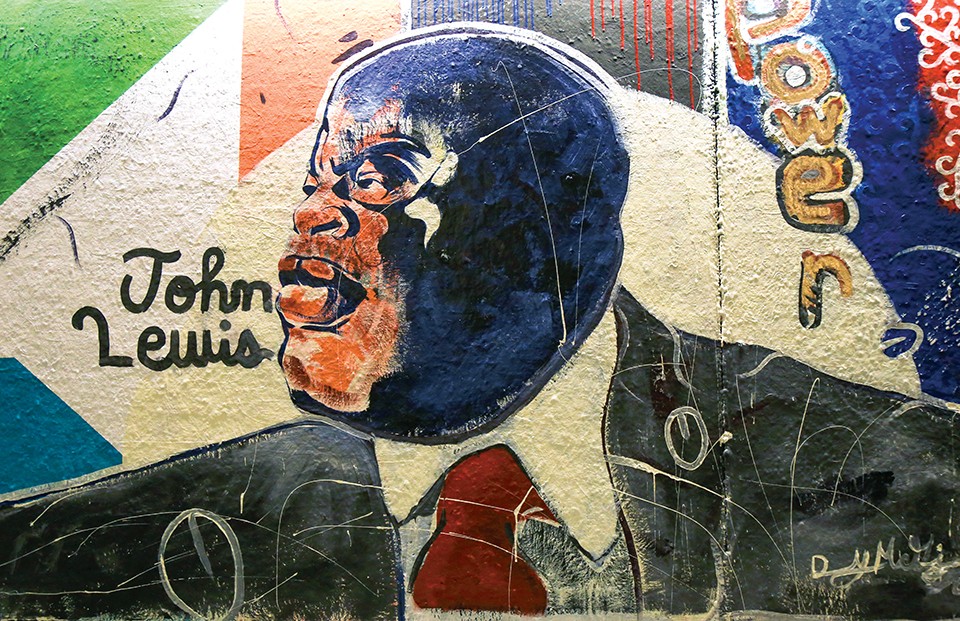 The next panel is by Seals and includes a quotation by James Baldwin: "Not Everything That Is Faced Can Be Changed But Nothing Can Be Changed Until It Is Faced." As the people of the United States look to the issues of the present day, such as race relations, the killing of unarmed Black men by the police, immigration reform, the caging of children, the COVID-19 pandemic, economic and food insecurity, and the opioid crisis, and as they attempt to find resolution and justice, Baldwin's words still ring true.

The final panel on the west wall of the underpass is a serious artistic imitation of Henri Matisse's The Dance. This mural panel was painted by Seals. The Dance II by Matisse was a mural 15 feet high and 45 feet long that took two years to complete. The Dance I by Matisse is much smaller and was considered by Matisse to be a sketch for the mural. It was painted in pastel shades. As in the large Matisse mural, the dancers with hands joined are painted red. Yet in Seals' mural the "blood red is meant to symbolize the blood being shed by Black people" according to the artist. The characteristic Seals brush strokes appear throughout and provide movement in the artwork. It is a companion panel to the Baldwin panel.