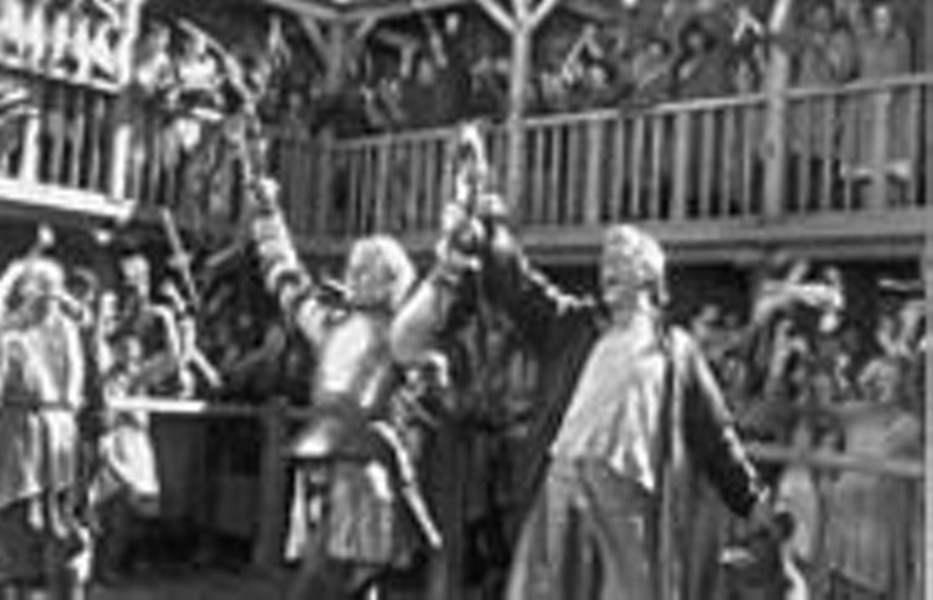 Heath Ledger (left) and Paul Bettany in A Knight's Tale, a film that's smart, wry and awesome, all at once.

In Stuff: The Product

There. Now, let's see, to blow out the remaining dregs of negativity, was there anything else to dislike about this movie? Well ... they could have cut about 20 minutes' worth of exploding lances (too much of a good thing, fellas) ... and the narrative parallels to the prettier and choppier Gladiator grow wearisome ... plus that silly singer Robbie Williams certainly hasn't earned the honor of a backing track from Queen. Besides a romantic quibble we'll attend to later, that's about it.

Having thus criticized, it's a thrill to celebrate an American movie that's smart, wry and awesome, all at once. One doesn't always opine harmoniously with venerable critic Peter Travers (What's that term again? Oh yeah: "quote-whore"), but his giddy appraisal employed in this movie's ad campaign is right on. Unabashedly formulaic though it is, this roguish adventure guarantees sylvan fun for everyone.

Like its cinematic forebears Flash Gordon, Army of Darkness and Plunkett & MacLeane, this is a guys' adventure story that cares not a whit for convention. Although this project lacks the shadows that enriched those films, it shares their weird and refreshing instincts, blending contemporary elements with the archaic and fantastic to give the imagination a nice wakeup slap. If hundreds of medieval extras pounding out Queen's "We Will Rock You" -- with Brian May's timeless solo emanating from cornets! -- doesn't jar your expectations, wait just a few moments to behold our 14th-century hero's woodsy training montage, set to War's "Low Rider."

Even if all the Knights -- Suge, Bobby, Ted, etc. -- made a movie together, it still wouldn't be as ... boss? ... as this thing. (By the way, let it stand that there is no such thing as a "bad Ren Faire costume" -- what the hell do you want, DKNY?) The title is admittedly generic -- as with Gladiator, it's like calling a contemporary movie Tight End (perish the thought) -- but a hook's a hook. Actually, the story's primary source -- apart from the standard "hero's journey" paradigm -- is the Arthurian legend of Parsifal, which writer/director Brian Helgeland (Payback, oddly enough) clearly read about as closely as the Coen brothers read Homer's Odyssey to make O Brother, Where Art Thou? Just the basics, folks: Country lad struggles hard, becomes knight, is deemed way cool, wins stuff. Roll 'em!

The lad in question, of course, is Heath Ledger (Roar, The Patriot), who spends the opening minutes of the film transforming from lowly William Thatcher to grandiloquent Sir Ulrich von Lichtenstein of Gelderland. (Fortunately for us, this shift includes the trimming of his natty blond dreads, eliminating the queasy feeling of attending a Reggae Sunsplash in Malmö.) The recently deceased Sir Ector provides the ill-fitting armor (gloriously designed for all the knights by Caroline Harris), and William's wily imagination does the rest. Determined to follow the advice of his poorly father (Christopher Cazenove) and "change his stars," William tells his mates, "Guts I have, and technique -- I have a month to learn that."

The friends include the uppity redhead Wat (Alan Tudyk, the uppity German from 28 Days), who is to patience and subtlety what the medieval church was to fun in the sun, and corpulent Roland (Mark Addy of The Full Monty), the sort-of Friar Tuck of the bunch. Skeptical at first, the fellows are suitably satisfied with William's first jousting victory to spend their share of the prize on eats, but the thatcher's son convinces them to tour with him as shouters of his glory, from Rouen to Lagny-sur-Marne and onward.

Joining their motley training outfit is an unemployed young scribe by the name of Geoffrey Chaucer (the superb Paul Bettany), whom they first encounter striding filthy and naked along a forest path. Claiming to have been mugged, Geoff agrees to join their team and forge papers for William's noble alter ego, but soon enough his shifty past returns to haunt him. "Yes, I lied!" he exclaims. "I'm a writer! I give the truth scope!" As the friends sort out their differences, William's winnings afford them an increasing sense of freedom from eternal serfdom.

Much of the fun of A Knight's Tale is in its simultaneous authenticity and loose-limbed quirkiness, best represented in the musical selections. Although the Coens' veteran composer Carter Burwell provides a suitably glorious score to match the period settings, the temporal juxtapositions are the crowning achievement. It's difficult to stifle the groovy pleasure when the opening notes of David Bowie's "Golden Years" first honk, almost imperceptibly, through a ballroom sequence. Such anachronisms don't feel cheesy at all; they feel like a glorious casting-off of chronological fixedness.

Of course, none of this would fly if Helgeland and production designer Tony Burrough hadn't put their heads together to make this world feel remarkably real. From the tiny villages to the tournament sites, from massive cathedrals to old London, one would never guess how much time we're actually spending looking at Czechoslovakia and CG mattes. Every scene is plausible and impressive.

The only exception comes with William's quest for romance. The pompous and cruel Count Adhemar (Rufus Sewell, Dark City) provides ample antagonism, but the dueling gents' shared interest in saucy young noblewoman Jocelyn (Shannyn Sossamon) makes no sense at all. Watching William willingly lose by her command to prove that his love for her is stronger than his pride, one wants to knock some sense into his head and tell him to redirect his manly lance toward Kate the blacksmith (Laura Fraser), or at least Jocelyn's handmaiden Christina (Berenice Bejo). Some knights just don't get it, do they?

That point aside, A Knight's Tale delivers more pageantry, countless humors and grand old-fashioned storytelling than just about anything you're likely to see this year. God save the queen, indeed. Huzzah!