Luke Reynolds has owned businesses in Soulard for fifteen years, sitting on the historically French district's Mardi Gras committee and its neighborhood and business associations, too. Even though he no longer lives in the neighborhood, he considers it his home. Add to that his passion for going out to eat — at one point, he estimates, he dined out at least five times a week — and he's uniquely positioned to weigh in on St. Louis' relationship with French food.

As the owner of Maison 808, a restaurant that is as classically French as it comes, you'd think Reynolds would be bullish about the cuisine. Instead, he says, he had become convinced the city had a lukewarm relationship with it, an observation he finds puzzling considering the city's French heritage. "Soulard is named after a Frenchwoman," he likes to say, and yet there was no French restaurant in the neighborhood and only a couple in the entire metro area.

Reynolds muses this is because people wrongly find the cuisine intimidating or unapproachable, something he saw firsthand: At one point several years ago, he attempted to turn his popular restaurant and bar, Mollys in Soulard, into a French-inflected spot. It was, he admits, a bust. This experience gave him pause when considering what to do with the real estate that would become 808 Maison.

Reynolds knew he wanted to open a restaurant in the space — that was the easy part. For a decade and a half, he has owned not just Mollys, but also the building in which it's located. At one point, this included another bar, Norton's. When it shuttered in 2009, Reynolds simply reconfigured the adjacent space into overflow for Mollys. Still, the configuration seemed awkward, and for some time, he'd been trying to figure out how to better utilize its two extra rooms and second kitchen. Eventually, it became clear that he should turn it into an entirely different restaurant.

To Reynolds, a new restaurant would do more than fill an underutilized space; it would also fill what he saw as a void in Soulard's dining scene. Though the area is flush with food and drink options, it lacked a more upscale concept — something he found quizzical considering its affluent demographics. The neighborhood had a built-in customer base that is both fiercely loyal to local businesses and equipped with the means to support them. They seemed to be begging for a nicer place to frequent, and, once Franco closed in 2016, had no place to do so.

It's fitting, then, that when Reynolds sought out ideas, Franco's former chef, Jon Dreja, hit him up with a vision for a classical French restaurant. Knowing what he knew about St. Louis and French food, Reynolds briefly paused, but then found himself jumping in with enthusiasm.

While Dreja developed the menu, Reynolds worked on the space, turning its two rooms into a cozy, romantic dining area and bar. 808 Maison is intimate, a fact that hits you when you walk up to the front door and into a tucked-away little alcove that seems almost hidden from the street. Inside, the low tin ceiling, navy blue velvet banquettes and dark-hued floral wallpaper evoke the sort of atmosphere you'd want for date night when the kids are away at a sleepover. A small bar with a mid-century modern aesthetic takes up one wall of the front dining room; to the back, a brick archway, semi-obscured by wooden panels, gives a peek into the partly open kitchen. 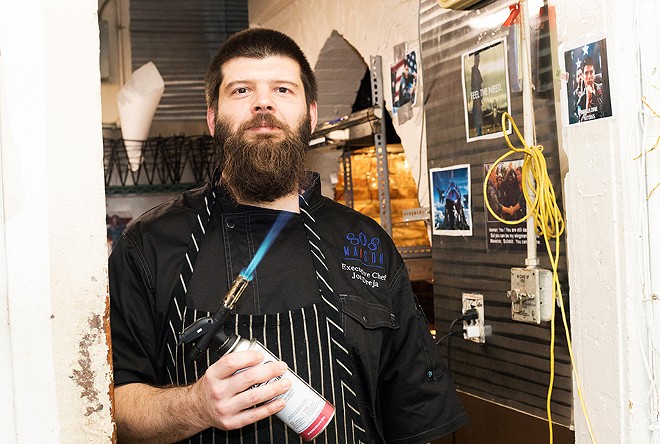 From that kitchen, Dreja turns out a menu of French fare so classic, it feels vintage – not all that different from that cool mid-century bar. A parmentier features sweetbreads that have been interspersed into a mouse-like cloud of foie gras and mushroom duxelle, then crowned with luxurious duchess potatoes and drizzled in veal jus. It's a warmly satisfying old-money version of shepherd's pie.

Dreja also hews to tradition with his duo of tuna and beef tartare. For the former, flecks of onion and a mildly spiced aioli accent the meaty fish without covering its flavor. For the latter, he goes old school, serving the beef with silken egg yolk and capers that provide a pop of acid that cuts through the richness.

Of course, 808 Maison offers French onion soup, and it executes this standard flawlessly. The broth is delicate and restrained, leaving room for a crouton and a heap of molten gruyère de comté. There is such a thick layer of cheese, you'd be forgiven for thinking this is a glorious, onion-scented fondue, a decadent treat. 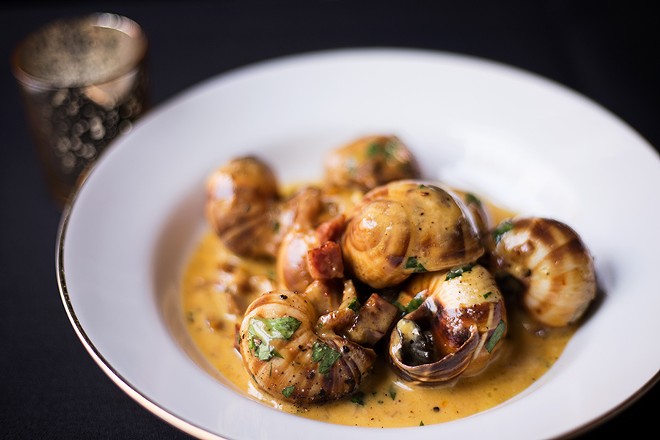 The star of the appetizers, however, is the escargot. As anyone who's eaten snails knows, the mollusks are merely an excuse to lap up whatever sauce accompanies them. Here, that sauce is an ethereal nectar of Madeira, garlic and saffron butter that's so wonderful, my guest and I shamelessly asked for a spoon to eat it like soup. Rich Spanish chorizo bobs in the butter, infusing it with paprika-flavored rendered fat; caramelized fennel and shallots intensify the flavor, lighting up the palate with a depth and richness that's positively haunting.

Though 808 Maison is a cozy French bistro, the steak and pomme frites might make you think you've stepped into a chophouse. The entree features a positively primal sixteen-ounce bone-in ribeye and, as if one bone isn't enough, a second one, cut open and filled with custard-like marrow, is served alongside it. I couldn't decide what to dip my steak into: the marrow or the side of horseradish-kissed allemande sauce that gave a slight contrast to the beef's fatty flavor. I chose both — and it was good enough, I chose the combo for the accompanying fries as well.

Dreja makes his own cervelas sausage, including enough pistachio and peppercorn in the mix to provide both a subtly menthol flavor and pleasant contrast of texture. The sausage alone is wonderful, but he wraps it in bacon and gruyère de comté cheese, then encases the concoction into a puff pastry for the most luxurious pigs in a blanket money can buy. Fennel, prepared almost like a sauerkraut, and sautéed arugula give the dish a welcome snap of licorice and pepper.

The kitchen is equally proficient with seafood. A whole loup de mer, or sea bass, is so moist it melts on the tongue, leaving in its wake the delightful licorice-seafood flavor of scallop and fennel mousse that is stuffed inside. Another dish, the bouillabaisse-adjacent Marseille seafood stew, is an absolute masterpiece, not just because of the bowl brimming to the top with a bounty of shrimp, clams, mussels, crab, squid, monkfish and sole, but also the haunting saffron fumet, accented with an anise-inflected whisper of Pernod.

You could linger over that stew for the evening, or you could order dessert, including a fudgey, flourless chocolate cake served à la mode with pistachio ice cream or, even better, a classic vanilla crème brûlée — paired with a glass of Sauternes, for good measure — that makes you fall in love with the ubiquitous treat all over again.

Having such a flawlessly prepared crème brûlée reminds you why the sugar-encrusted custard is such a classic. But it's not just the desserts that make 808 Maison such an eye-opener. The restaurant, overall, is a brilliant reminder of the beauty of authentic French food, a way of eating that has gone out of vogue in recent years as restaurants have eschewed tradition in favor of innovation.

That innovation is not a bad thing, per se, but it's not the only way to eat. As 808 Maison proves, sometimes, you need to revisit the classics — especially in the French part of a decidedly French town.