8 Great St. Louis Pork Steaks You Should Eat This Summer

MABEL SUEN You can get your pork steak at Smoki O's with "Minnie's Potato Salad" and barbecue spaghetti, just like Minnie Muriel Hall Walker used to make it.

A "Terramizzou" concrete from Ted Drewes. Brats cooked over the campfire after a day of floating down the Huzzah. Nine-dollar Bud Lights and a kraut-covered dog enjoyed from Busch Stadium's upper deck.

Summer in St. Louis has a smorgasbord of signature tastes, but the pork steak still reigns as king. For the uninitiated — in other words, transplants, because if you've grown up in the Lou you have Maull's coursing through your veins — the pork steak is a slab of meat cut from the shoulder of the pig, also known as a blade steak.

Traditionally slow-cooked and simmered in a tangy sauce of tomato and vinegar to break down its tough flesh, the pork steak is the staple of sweltering cookouts, shorthand for what is meant by "St. Louis-style barbecue." It's not just anecdotal; the National Pork Board says the St. Louis area purchased a staggering 4.35 million pounds of pork steak last year. That's more than three times the national average.

Of course, pork steaks are best enjoyed in their natural habitat, namely someone's backyard, over a game of "Hoosier golf" with Van Halen's "Panama" playing in the background. However, if you're not fortunate enough to get invited to such a spectacle, you're still in luck. This saucy slab of pork can also be found in local restaurants ranging from soul-food staples to the new crop of smokehouses that embody the spirit of St. Louis Barbecue 2.0.

We've mapped out a few places that will satisfy your craving for this most St. Louis of dishes, a list that is admittedly not comprehensive and in no particular order — because really, the best pork steaks in town are probably being cooked right now by someone's jorts-clad, Busch-swilling uncle on the deep south side. But when you have to get your fix, these should do you just fine.

Phil's Bar-B-Q
9205 Gravois Road, 314-638-1313
Some 60 years ago, Phil Polizzi was a fruit salesman, operating a watermelon stand on St. Louis' north side. When he added grilled meat to his repertoire, his business took off, so he decided to devote himself exclusively to the craft and opened Phil's Bar-B-Q in a small shack off Gravois Road. Now his son Pete owns the place, but that's one of the few changes that have occurred at Phil's over the years. The restaurant is still known for the homestyle comfort fare pioneered by Dad back in the day, including a pork steak that is both basted in sauce while cooking and then smothered once it's off the grill for good measure. This is not the smoked meat of a backyard cookout. Instead, Phil's cooks its pork steak over an open flame inside the restaurant, a method that allows the unadulterated flavor of sweet pork and zesty sauce to shine through. Enjoy it with a side of mostaccioli while perusing the local memorabilia that hangs on the wood-paneled walls, and bask in the flavor of the south side. 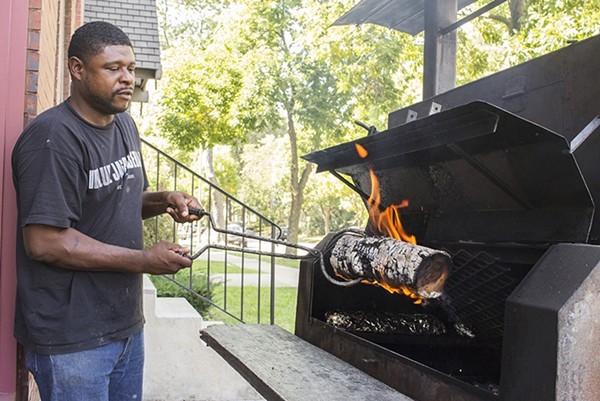 Five Aces Bar-B-Q
4000 Shaw Boulevard, 314-771-4001
Antonio Ellis knew he was taking over a legend when he opened Five Aces Bar-B-Q in what used to be Mama Josephine's. That predecessor had been a Shaw neighborhood favorite, known for the Southern-style home cooking served up by the beloved Mary Samuelson. However, Ellis has a few tricks of his own up his sleeve, namely the kind of classic "parking lot" barbecue you see pop up around the city this time of year. That's how the Navy veteran got his start, but as he got better at his craft, he knew he needed a space of his own to showcase his wares. Enter the building at 4000 Shaw, which he's turned into a bona fide smokehouse with ribs, brisket and, of course, a pork steak that is the embodiment of the form. Ellis doesn't use salt in the rub that coats the meat. Instead, it's a secret blend of spices that spike the pork with Creole and jerk flavors like thyme, chiles, cinnamon garlic and clove. The sticky, molasses-like glaze coats the meat and caramelizes, complementing the bitter, char-grilled flavor. It may no longer be Mama's, but it surely makes her proud.

Nubby's
11133 Lindbergh Business Court, 314-200-9123
If a sports mall in deep south county isn't what comes to mind when you hear the word barbecue, then you haven't been to Nubby's. Amidst the inline hockey and baseball camps, pitmaster Matt Hines is turning out some serious smoked meat in one of the area's more unlikely locations. A landscaper by trade, the self-taught Hines fell in love with barbecuing as a hobby, then decided to go pro earlier this year with his first smokehouse. He calls his style "backyard barbecue," exemplified by a beast of a pork steak that weighs in at a whopping one-and-a-half pounds. Fork tender and coated in mouthwatering housemade glaze, it's the quintessential taste of a summertime cookout, minus the backyard in locale but not in taste. 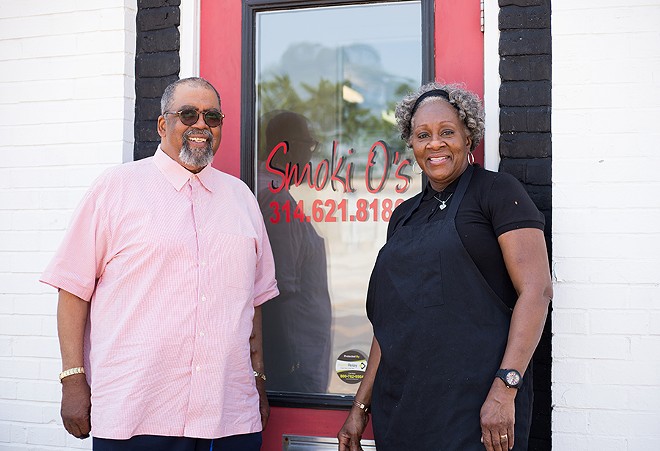 Smoki O's
1545 North Broadway, 314-621-8180
Smoki O's may be just over twenty years old, but its roots date back decades, to Minnie Muriel Hall Walker, a backyard grill-master who started learning how to smoke meat when she was just a schoolgirl. After she passed away, her sons Otis B. Walker Jr. and Bruce A. Walker Sr. opened Smoki O's to keep her legacy alive, and boy have they succeeded. Together with Otis' wife Earline, they have created a humble yet powerful homage to the soul-food-style barbecue their mother prepared. Of course a pork steak is part of that repertoire. Thick, saucy and served in an aluminum-foil-lined Styrofoam takeout container, this is original, St. Louis-style barbecue, humbly served out of a white brick building on North Broadway. It goes without saying that you'll want to pair that steak with some barbecue spaghetti, mac and cheese and, if you are feeling extra decadent, an order of the restaurant's signature snoots — it wouldn't be a Smoki O's visit without them.

Sho-Me BBQ
300 St. Ferdinand Street, Florissant; 314-395-6400
If Florissant's Valley of Flowers festival is the city's unofficial kickoff to summer, then Sho-Me BBQ should be the master of ceremonies. Located in a former produce stand, this carryout smokehouse tastes like a north-county picnic with rib tips, potato salad and juicy pork steaks that are slathered in thick, sticky glaze. Some of that delectable sauce will surely come off in the Styrofoam carryout container, but don't worry; just sop it up with the provided bread or some yams. It would be a pity to waste even one drop of this taste of Old Town.

Paul's Market
1020 North Elizabeth Avenue, Ferguson; 314-524-3652
"The Biggest Little Steak Store in St. Louis," Paul's Market is less a grocery store than an institution: a still-thriving piece of a bygone, pre-big-box era when every neighborhood had its own corner grocer and the butcher knew how you wanted your meat cut without having to ask. For almost six decades, this beloved market has been a mainstay of the Ferguson food community, where the spirit of that time lives on with every slab of ribs or strip roast that gets pulled out of its case. It's one of the best meat counters around, but what sets Paul's apart is its prepared-foods business, especially the smoked meats cooked in its Ole Hickory smoker out back. You won't always find Paul's stocked with pork steaks — they are one of the many rotating specialties — but when you do, grab one for every member of the family. Soaked in a thin layer of tomato-forward barbecue sauce, one taste will prove why this place has such staying power. 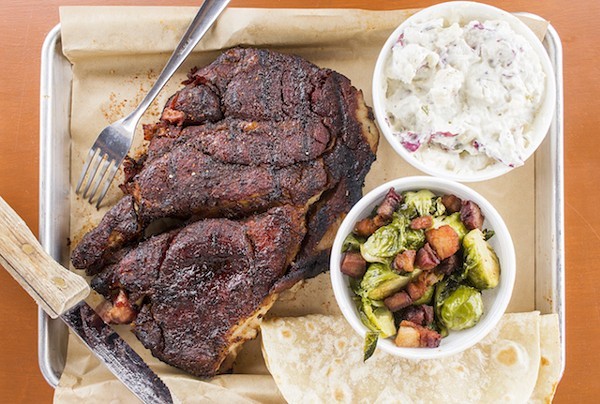 BEAST Craft BBQ
20 South Belt West, Belleville, Illinois; 618-257-9000
If you had to crown a king of pork steaks, there would be no debate: BEAST Craft BBQ reigns supreme. Pitmaster David Sandusky may be located some twenty miles across the river from the city's center (for now — his second BEAST outpost is opening in the Grove in the coming months), but that doesn't stop him from dominating the pork-steak game. Unlike the traditional versions, BEAST's is fall-apart succulent, more like a composite of pulled pork than a steak, and cut so thick that, at first glance, you'll think you have been mistakenly served a Delmonico ribeye. This big, bold beauty also deviates from the norm because it is sauceless — unless you count the slick of fat and rub that drips into every nook and cranny, and why wouldn't you? Part of the new guard of world-class pitmasters now leading the St. Louis barbecue movement, Sandusky is putting out some of the best barbecue in the region, if not the country. That prowess is so powerful, it means your most St. Louis summer ever just might have to begin in Belleville.

Gamlin Whiskey House
236 North Euclid Avenue, 314-875-9500
Though Gamlin Whiskey House may be a more upscale setting than your cousin's backyard, its "Joe's Backyard Pork Steak" channels that spirit flawlessly. A monster of a cut, this 24-ounce hunk of meat dazzles with a barbecue glaze that has a faint whisper of vanilla. A dollop of beer-braised onion butter melts over the top, mixing with the sauce to form a heavenly concoction that soaks into the accompanying bacon-mashed potatoes. You'll wash it down with Old Grand-Dad rather than a can of High Life, but otherwise, you could close your eyes and think you were outside on someone's patio — albeit a very nice one.