50 Years After Taking St. Louis by Storm, Progress Can Still Pack ‘Em In

PROVIDED BY THE BAND Members of Progress trace their time with the band back to their high school days.

You'd be hard-pressed to write a storyline as St. Louis-centric as that of the band Progress.

The group formed in the '60s when its members were just teenagers, a bunch of southside Catholic school boys who'd go on a short but extremely popular run lighting up the then-competitive teen town scene. After that, they'd take on a summer stint at the Admiral, where they'd be entrusted with the job of stopping the "graying process" that was taking place on the popular riverfront attraction. Over time, the band not only attracted the attention of a young Steve Schankman of Contemporary Productions as its booker, it even added him as a member.

His presence swelled the band from nine members to ten, including three trumpet players, who provided the spine of a five-piece horn section. But if the group was able to make a mighty noise with the presence of so many players, that big membership would eventually cause its pause. Scholastic pressures and geography brought its run to an end.

But there'd be a reunion, then another and then even more. All it took, says co-founder and trombone player Jim Mills, was the passage of a long sabbatical of 40 years.

"I'd bought a farm and in 2016 I gathered everybody together in my barn. We put some straw bales out and everyone's wives were there," Mills says. "Our drummer counted off four and played Chicago's 'Does Anybody Really Know What Time It Is?' And the wives looked at each other like, 'Oh, gosh.' They'd never heard us do this. We started getting together every spring and fall, and one thing led to another ..."

And another. Schankman, of course, still has the connections to pull off a multi-band booking at the room of his choice, and it was he who booked the new Progress on some shows alongside his own long-running act, the Fabulous Motown Revue (for which he features on trumpet). On February 9, the two bands were in action at the Casa Loma Ballroom, playing to a packed room.

"It took fifteen minutes to get a drink," Mills says. "That's what stood out in my mind. I enjoyed listening to the Motown Revue, too. It's hard work sharing a stage with those guys."

Mills and sax player Steve Radick, who co-founded the band while walking home from school one day in 1968, could never have predicted the group would still pack 'em in 50 years later. But here they are.

"It started out with the band playing songs like 'My Girl,'" Mills explains. "But then the group Chicago Transit Authority came along. As you can imagine, we were very challenged by playing that music. Those guys in Chicago were so excellent."

The formula worked. Within no time, the band had gigs at schools all over St. Louis, particularly in the then-thriving teen town scene. Its sudden burst into that world caught Schankman's attention.

"We were grabbing jobs that he would've grabbed for his production company," Mills says. "So he approached us and said, 'I'd like to take you on, we can do a better job on bookings. I'd also like to join the group as a player.' Now we had ten guys and five horns and were doing prom after prom."

The gig that truly cemented Progress' popularity in town came via the Admiral, where the band was booked to a four-nights-a-week routine in an attempt by Streckfus Steamers to keep the ship relevant in the changing entertainment landscape of the late '60s and early '70s. That outfit, which operated the Admiral from 1935 until its retirement in 1979 and sale in 1981, placed a smart bet on Progress, which drew a young and enthusiastic audience.

But the band struck a chord with the older, established Admiral regulars, too.

"With that crowd graying, they needed a transition group," Mills recalls. "Streckfus wondered, 'How do we cater to our older crowd, but still bring in some younger people?' Well, we agreed to learn to read charts and so we were able to do both kinds of music. That summer gave us so much experience, and coming off of that we were booked like crazy."

Instead of working part time around their neighborhoods, the young players of Progress were essentially professional musicians in their mid-teens. But as the members aged into the next stages of their educations, the gig was up. 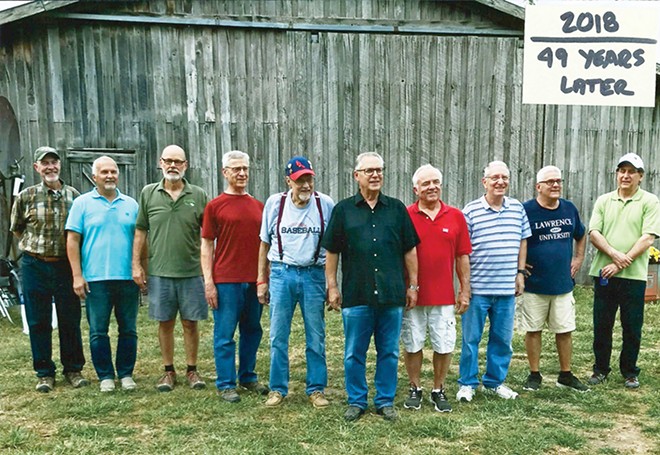 Mills went on to a college career at University of Missouri in Rolla before becoming a builder, a lifestyle that allowed him to eventually purchase a farm in Bourbon, Missouri. Then that barn session of 2016 came around, and something special was rekindled.

"It's been magical," Mills says. "After all this time, we've been able to do this."

The band even got to play the 50-year reunion for its grade school, Our Lady of Sorrows. "Our classmates were in shock," Mills says. "What's the chance that 50 years later, a band would be there, playing the same music, with all the same guys doing the same songs? It was just unbelievable."

Since that show, however, the number of members has decreased by one, with the passing of trumpeter Goessler. "Practically speaking," Mills says, "we were able to continue on, the nine of us, but we sure do miss him."

There will likely be another gig, or two, in 2019. And the band will be back together for a session in the barn in May, a tradition that's now an annual piece of their collective calendar.

"There was just this terrific bunch of guys," Mills says of his lifelong musical comrades. "In most bands, there's usually someone who gets controlling or different players will butt heads. But we never had that. It's like time has stood still in our friendships."