PHOTO BY DANIEL HILL Just Bill's is the cultural hub of all Overland life.

So you're at Lambert International Airport with time to kill. Whether that's because of a missed flight or an international incident, let's say you've got 24 hours to spend and would rather not waste your money on pricey cab fare. Well, you're already in St. Louis' north county, a.k.a. the finest county in the metro area (quiet down, west county). Why not make the best of it?

To that end, we recommend making the three-mile jaunt to Overland. While smaller than its better-known neighbors to the north, Florissant and Ferguson, the Overland area offers delights all its own, and even a little history. First settled as an overnight stopping point for frontiersmen heading west from St. Louis in the 1820s, Overland was once home to a one-room cabin built by no less than Daniel Boone. Its first school was constructed in 1846; the town was officially incorporated in 1939.

Today Overland has a population of roughly 16,000. It is a working-class town through and through, with plenty of entertaining and inexpensive ways to while away the hours.

In true north-county style, we're including several nearby tiny municipalities in our itinerary — borders are porous here, and seats of government a'plenty. But within a few square miles you'll find a wealth of food and fun, plus dive bars galore.

Grab one of those abundant airport taxis and head to Hustler Hollywood (9802 Natural Bridge Road, Berkeley; 314-428-5069). Tell the manager, Kevin, that RFT sent you. Then stock up on pornography.

A Walk in the Park

Smut secured, why not enjoy the natural beauty of nearby Endicott Park (2950 Endicott Avenue, St. John; 314-615-4386)? With 24 acres of wooded land and an eighteen-hole frisbee golf course, you have all the excuse you need to take in the great outdoors. 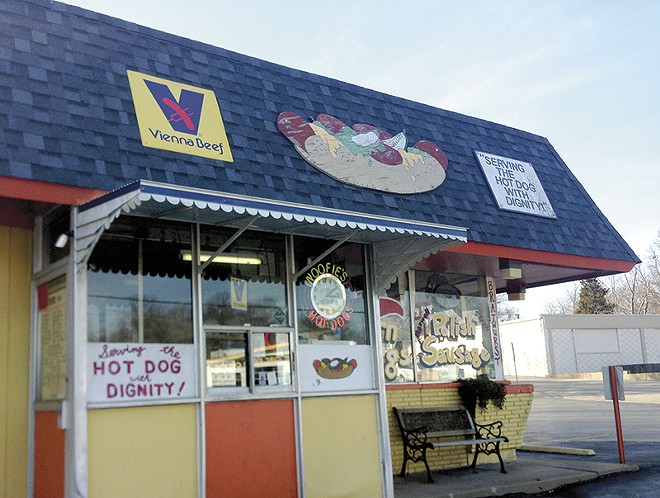 Not into bars? That's OK! You're still gonna spend some time on Woodson. Instead of the bar crawl, make your way from lunch to the St. Louis Car Museum (1575 Woodson Road, Overland; 314-993-7104). With a plethora of classic cars, motorcycles and airplanes dating back as far as 1909, you'll find plenty to drool over. Best of all, everything is on sale! Purchasing an airplane at this juncture would eliminate the need to spend any more time waiting around at Lambert ever again — something to consider. Next, head down Woodson to Null & Crossbones (9319 Midland Boulevard, Overland; 314-731-6855) — a Grateful Dead-loving couple's store chock-full of all manner of Dead and skull memorabilia. Stock up on skulls, then make your way to Overlord Military Collectibles (3008 Woodson Road, Overland; 314-423-6644) for some authentic gas masks and army helmets. Overlord has been in business for more than 40 years — its collection is impressive and stacked in huge piles throughout the crowded store.

Whether you chose bars or shopping, surely you are hungry again. There are two excellent options within easy walking distance of both Overlord and Crowbar. In the mood for some Tex-Mex and margaritas? Backtracking a bit to Chimi's Fresh-Mex (2435 Woodson Road, Overland; 314-942-1038) is highly recommended. Pizza more of your thing? Nick & Elena's Pizzeria (3007 Woodson Road, Overland; 314-427-6566) makes a St. Louis-style thin crust that gives Imo's a serious run for its money.

It's nighttime now, and your stomach is full but GASP! — you lost your pornography, either while drunkenly stumbling down Woodson or as part of your airplane purchase. No worries; Rhonda's Place (10528 Page Avenue, Overland; 314-423-0633), one of the only gentlemen's clubs (read: pastie bars) this side of the river, is just two miles away. Essentially a dive bar with a pole in the corner, Rhonda's is the perfect spot to tie one on or simply meet some friendly locals before heading to an airport-area hotel for the night. Might we recommend the Motel 6 (4545 Woodson Road, Woodson Terrace; 314-423-6770)? At less than $40 a night, it's the cheapest place in town to lay your head.

After you awaken but before you catch your flight back out of town (or fire up your new airplane, as the case may be), be sure you head to George's Diner (2539 Woodson Road, Overland; 314-428-1143) — one of the tiniest and friendliest little diners you've ever seen — for some delicious from-scratch biscuits and gravy. On your way out you'll notice that Just Bill's is right next door. You'll try to resist, but you'll be unable — the power of Overland compels you. One for the road, bartender!