All that you touch you change." These words, inscribed on a plaque that sits on the counter at 24:1 Coffee House/Cafe, ring out when you look at the tables that comprise the restaurant's seating.

At first glance, they could be made from any reclaimed industrial material — the rustic metal legs, craggy wood and sheen of fresh lacquer over the top would be at home in any self-consciously hip cafe with a coffee program described as "of the moment." Peer under that shiny surface, however, and you start to get why a place like 24:1 Coffee House/Cafe needs to exist.

Old blackboards, salvaged from the ruins of abandoned Normandy school buildings, have been given a second life as tabletops. This time, instead of a teacher's scrawl, they're covered in colorful pictures by current Normandy students at the Jefferson Art Academy. Most depict variations of the coffee-shop theme, with drawings of coffee cups, doughnuts and waffles. Others are more poignant, including one table with the words "Black Lives Matter" in large red letters. Underneath, the artist appears to be having a conversation with herself through a series of phrases: "I have a dream." "Everyone have dreams." "I have dreams."

That a young artist has turned a piece of a crumbling school into an assertion of her right to dream underscores the promise of 24:1 Coffee House/Cafe and the 24:1 Initiative from which it was born. It's no secret that the Normandy Schools Collaborative (formerly the Normandy School District) and the 24 municipalities it encompasses have had a tough run. Michael Brown may have died in Ferguson, but Normandy High was his alma mater. His death laid bare many ugly truths about north county, including the poor state of the school district, which lost accreditation in 2012, during Brown's time as a pupil.

But the seeds of change had already been planted a year prior to that, when the community-development agency Beyond Housing launched the 24:1 Initiative. Formed to address the challenges within the Normandy footprint, 24:1 recognized that building better schools meant building better communities. Health care, homeownership opportunities, non-predatory financial institutions, shopping centers and even a movie theater were on residents' wishlists. The 24:1 Initiative delivered.

It took time to deliver on one of the most fervent requests: a restaurant. Though the Pagedale neighborhood where 24:1 Coffee House/Cafe sits isn't exactly a food desert, sit-down dining options were virtually nonexistent. Members of the community were set on changing that; the problem was how to do it. As a community-development organization, 24:1 needed to partner with someone well versed in the restaurant business — someone with a connection to the community and a background in the service industry. That someone was Jim Thomas.

A veteran chef who counts storied restaurants Noah's Ark and Al Baker's as former employers, Thomas had spent a good deal of his career operating his own catering business and small fine-dining space. After the recession led to its closure, he landed at Clayton's restaurant in O'Fallon where he worked alongside his friend Robert Cleveland. A fellow caterer and private chef who got his start cooking in the Navy, Cleveland was the perfect collaborator.

Thomas, whose mother hails from Pine Lawn, was first approached by the 24:1 Initiative to help it conceive of a restaurant; eventually, the talks led to an offer to run the place. He brought along Cleveland, and the two men got to work creating an eatery that would be not only a place to enjoy good, freshly made food, but a community-gathering place as well. It took longer than they anticipated, but 24:1 Coffee House/Cafe finally opened its doors in June.

Their menu consists of traditional breakfast-and-lunch items meant to be savored around those lovely tables. In one entree, creamy gravy, spiked with a generous amount of cracked black pepper and laden with sausage, covers fluffy biscuits like a rich blanket. Thomas' Southern grandmother, the inspiration for his cooking career, would be proud. 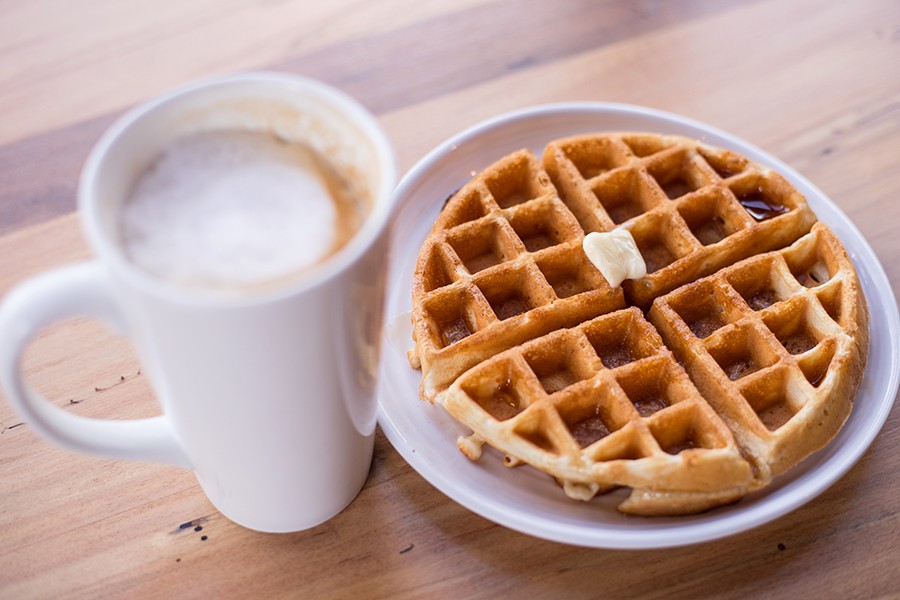 The "24:1 Stuffed Biscuits" are the restaurant's take on a hand pie: A buttery shell, equal parts pie crust and biscuit, is over-stuffed with cheese, eggs and bacon. As you cut into it, the cheesy filling oozes out, begging to be soaked up by the crust's flaky edges.

Other breakfast dishes are standard, yet adequate — malty pancakes, peppery shredded hash browns and creamy grits. They'll satisfy the need for a basic breakfast, but if you're looking to be enamored, grab one of the cinnamon rolls. Every layer is soft and covered in cinnamon. Served hot, the vanilla glaze seeps into every nook and cranny, elevating an already delicious pastry into a thing of beauty.

If 24:1 Coffee House's breakfast is good, lunch is where it shines brightest. A vegetarian "chef's special" wrap combines black beans with brown rice and a vibrant sweet-potato relish that, along with grilled onions and tomatoes, enlivens the melange with tangy refreshment. Another vegetarian dish, the "Vegetable Open Face," combines grilled yellow squash, zucchini, mushrooms, onions and tomatoes with molten Gouda cheese for a sandwich more satisfying than any meat offering on the menu. And to think we've been touting avocado toast all this time. 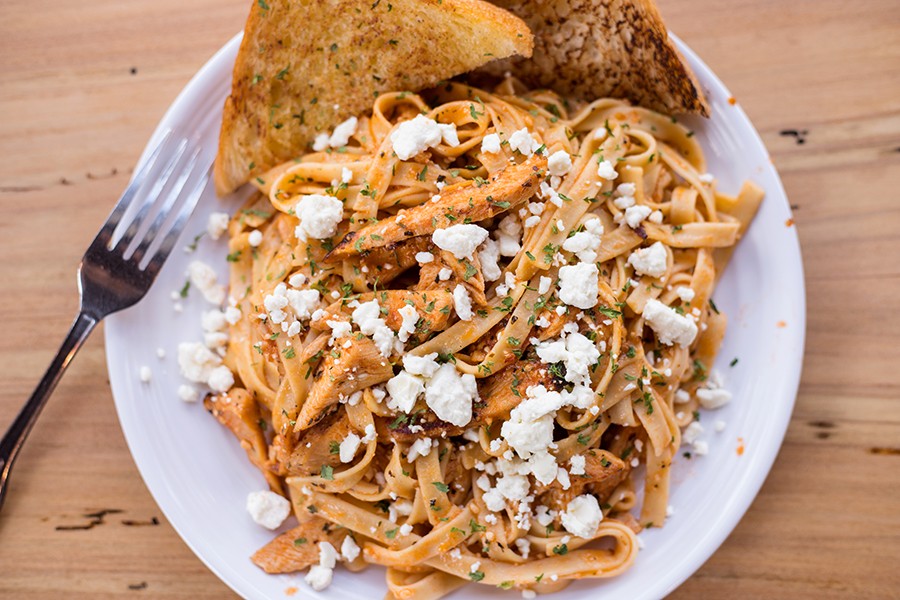 I did not pick up any Cajun spices in the "Cajun Penne Alfredo." What I did get, however, was a magnificent creamy alfredo, kissed with fresh parsley and sprinkled with grated Parmesan cheese, that was a case study in cream-sauce pastas. Not too rich, not too loose, the luxurious white sauce clung to the perfectly al dente penne. I'm still trying to understand the source of the name, but I was nevertheless pleased at the delicate simplicity of a flawlessly executed cream sauce.

While the alfredo pasta dazzled with its simplicity, the mostaccioli hit me over the head with its heft. A massive platter of pasta smothered in tangy tomato sauce was made even more massive by a heaping portion of ground beef. Weigh it out, and I'd bet the farm it is equal parts noodles and meat — a hearty concoction on its own that, covered in molten Provel, becomes borderline criminal. Still, convict me and throw away the keys. It's perfection of the form.

If you're training for a marathon, order the mostaccioli. If you want something a bit lighter, the spinach salad with salmon is perhaps the restaurant's best offering. The salad is simple: Baby spinach leaves, accented with red onions, tomatoes and cucumbers, make a verdant bed for an herb-crusted fillet of grilled salmon. The fish is tender, perfectly seasoned and cooked flawlessly — a mark of Thomas' and Cleveland's skill. A simple lemon-and-dill dressing accents the salad, reminding us why this pairing has become a classic.

The pecan pie, on the other hand, reminds us why we save room for dessert. This is a classic rendition: gooey corn-syrup filling, candied pecans and flaky crust. However, classic does not mean standard. The filling is like caramelly butterscotch, not the one-dimensional sugar bomb that is so often served. An unexpected essence of citrus cuts through the sweetness. While candied, the pecans remain crisp and retain their savory notes. And the crust — shortbread cookies envy its nutty, butter-studded flavor. If there's a better version of pecan pie around, I've never had it.

The artists whose designs grace 24:1 Coffee House may not have cared about whether the pecan pie served on their tables would have the appropriate syrup-to-nut ratio or if the salmon is cooked to the right temperature. Those of us eating here, though, are lucky — not just that this spot now exists in an underserved community, but that so much care has been put into all its details.

But really, if it's true that what you touch you change, then Thomas and Cleveland have transformed more than some flour, butter and salt into great pie crust. Their deft touch has taken a stretch of Page Avenue that used to be a food desert and turned it into an oasis. In a part of town that has longed for such an option, that's a change worth believing in — at a place with food worth eating.