by Paul Friswold and Daniel Hill 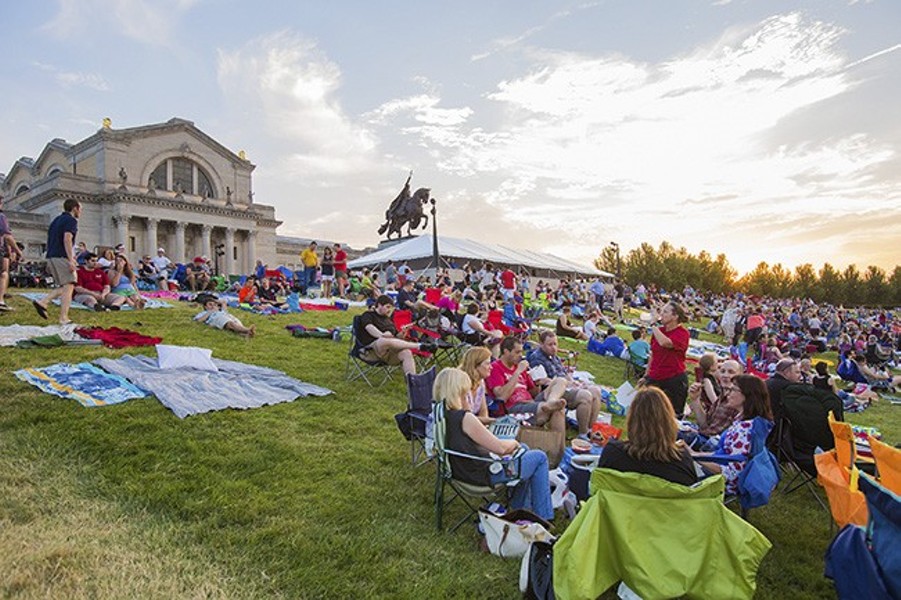 Summer in St. Louis is hot, humid and lasts for months. That leaves you with two choices: You can either hole up in your air-conditioned bunker, making the occasional mad dash to your car for a post-sunset Ted Drewes run, or you can embrace the sweat and the mosquitos and live your life to the fullest. Well, maybe not the fullest. But you can definitely get outside and mingle with the other sweaty people — it won't cost much. Each of the twenty concerts, festivals and crawls on this list will set you back $10 or less.

And don't worry about missing out if you choose the "carpe diem" route. We have it on good authority: Ted Drewes will still be there when you need it.

Truly, the greatest injustice at zoos worldwide is that the animals inside never get a chance to watch humans play music. Or do they? The Jungle Boogie Concert Series brings bands to Schnuck Family Plaza, located at the center of the St. Louis Zoo, to perform every Friday this summer (except for June 16, an off-day this year). Turnabout is fair play: Join the animals in gawking at some humans for a change. This year's highlights include bluegrass act the Mighty Pines, jazz swingers Miss Jubilee, Beatles cover act Ticket to the Beatles and plenty more. All the fun goes down at 5 p.m. Fridays, May 26 to September 21 at the St. Louis Zoo (1 Government Drive; www.stlzoo.org). See www.stlzoo.org/events/calendarofevents/jungle-boogie for more info.

What better way to kick off the summer than with a stroll down memory lane? The Mississippi Nights Music Festival, thrown for the first time this year (but with an eye on becoming an annual Memorial Day affair) is sure to bring nostalgia, especially for those who spent time at the now-bygone Mississippi Nights venue before it was demolished in 2007 to make way for Lumiere Place. Even if you don't count yourself among that (relatively) older group, 2017's all-local lineup offers plenty of reasons to leave the house. More than 25 acts will perform, including such highlights as Bruiser Queen, Steve Ewing, Jeremiah Johnson, Ultraman and the Trophy Mules. Things kick off at 3 p.m. Saturday, May 27, in Laclede's Landing (710 North Second Street, www.lacledeslanding.com). And with tickets set at only $10, you'll spend less than 40 cents per band. Even the price is nostalgic!

Though it is technically billed as a springtime affair, the Missouri History Museum's Twilight Tuesday Concert Series does poke into the summer months just a bit — and considering the free concert series' massive popularity, it certainly seems worth a visit. Bring a blanket and a picnic basket, or grab some grub from one of the nearby food trucks, and stretch out on the front lawn of the Missouri History Museum (5700 Lindell Boulevard, www.mohistory.org). The event starts at 6 p.m., so you can watch the sun set in beautiful Forest Park while taking in some tunes. The last two events of this series are sure to be crowd pleasers: Long-running tribute act Jake's Leg will perform the songs of the Grateful Dead on May 30, while A Musical Revolution will tackle Prince's catalog on June 6. For more information visit mohistory.org/twilight-tuesdays.

Would it be possible to experience summer in St. Louis without Circus Flora? No one wants to find out. The one-ring circus sets up in Grand Center at the start of June, acting as a de facto starter's pistol for the season's fun. This year's show, Time Flies, is inspired by the fourth dimension — time itself. Acrobat Sasha Harrington, juggling champion Kyle Driggs and the always-popular Flying Wallendas will take you with them as they travel through space and time, magically making you feel like a kid again. New this year is equestrienne Heidi Herriott, who teams up with dancer Andrea Murillo to unveil the world's first tango performed by a human and a horse. Circus Flora does it all in the Circus Flora Big Top (Samuel Shepard Drive and North Grand Boulevard; www.circusflora.org) from June 1 to 25. Tickets start at $10 for select shows.

An Evening With Smooth: A Tribute to Santana and Rob Thomas

We are living in the time of Peak Meme. We thought the internet would make all of us more connected, better educated, wiser, smarter. It hasn't. Instead we've invented new and increasingly ridiculous ways to make ourselves giggle, spoofing every part of our lives, from movies to politics to music, with increasingly absurd online gags. And now, horrifyingly, the memes are beginning to step into our real lives. Case in point: Rob Thomas and Carlos Santana's 1999 hit "Smooth" has become one of the most-memed songs of our time, second only perhaps to Smash Mouth's "All Star," and is now getting its own tribute show. It's planned for Friday, June 2 right here in St. Louis. Naturally, smoothies will be sold, and t-shirts featuring the track's unforgettable lyrics are free with admission at Off Broadway (3509 Lemp Avenue, www.offbroadwaystl.com). The kicker? The show will close with "Smooth" being performed live no less than ten times in a row by local musicians led by Tok bassist Matt Basler. The evening is sure to be just like the ocean under the moon, the same as the emotion that I get from you. Head down to Off Broadway with $8 and your sense of humor intact — or else forget about it.

New Orleans is cool, sure, but it's also a ten-hour drive and everything kinda smells like pee. Who needs it? Especially when we have Summer Gras right here in our own backyard. Now in its fourth year, the annual event aims to bring the music and food of New Orleans to the Old Rock House (1200 South Seventh Street, oldrockhouse.com) with an outdoor stage and plenty of way-down-South eats. This year's lineup kicks off at 5 p.m. and includes the Provels, Al Holliday & the East Side Rhythm Band, the Grooveliner and more for just $10. Complete the illusion of travel by wandering the streets with open liquor and throwing a parade for yourself. If the cops come, just don't tell them we sent you.

Artists First is an organization with a noble mission. The non-profit runs an open studio in Maplewood, providing a nurturing environment and an artistic outlet for adults with disabilities, veterans and children. Scheduled for Saturday, June 3 from 5 to 10 p.m., Rockin' the Ritz will see some seven St. Louis acts performing in Ritz Park (3147 South Grand Boulevard, southgrand.org/locations/ritz-park/). Enjoy the pop-rock stylings of Whoa Thunder and Middle Class Fashion, catch Bagheera on the heels of its first album in several years and fall into a trance with the hypnotic looping magic of Syna So Pro. Mangia will be donating 25 percent of its profits for the evening. Admission is free, but donations are strongly encouraged.

It happens far too often. Riddled with summer boredom, you give in and head to one of the county's shopping malls, only to regret it immediately. The empty shops, the giant baby carriages coming at you from all angles — it feels like Mad Max in Romper Room, and it is depressing as hell. You can still satisfy your hunter/gatherer tendencies, just do so in the city. The Grand Market: Fashion, Flowers & Folk is a one-day celebration of local fashion artists, folk musicians and floral design centered on .Zack (6224 Locust Street, www.instagram.com/thegrandmarketstl) and spreading out along Locust. You can browse booths and fashion trucks offering designs and beauty essentials from local businesses such as Tiny Hedgehog, Mineral and Root, and Pop Vintage while enjoying the music of Catching the Westbound, Salt of the Earth and Letters to Memphis. Chef David Kirkland offers samples of the food at his new place, Turn, and you can practice your flower arranging skills at Snapdragon Studio's DIY floral design booth. The inaugural Grand Market takes place from 10 a.m. to 4 p.m. Sunday, June 4. Admission is free.

Turn the page for more fun things to do this summer.