20 Album Covers to Stare at on Flag Day

Share on Facebook
Tweet
Submit to Reddit
Email
Putting the American flag on an album cover is sure to get your album or single more than a passing glance from most people. It's a powerful symbol. So in honor of flag day (June 14), here are ten albums that display Old Glory front-and-center on the cover, which could make you think a little differently about the country in which you live. Curated by Nick Lucchesi and Thorin Klosowski.
OF 20
PREV NEXT 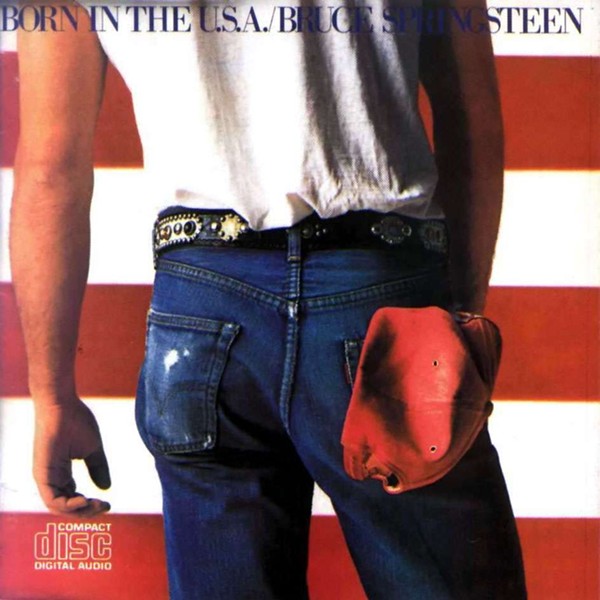 Arguably the most famous album cover on this list, Born in the U.S.A. by Bruce Springsteen also displays the Boss' backside in addition to the stars-and-stripes. Reagan's campaign famously used the title track in his re-election campaign, not knowing Springsteen's political leanings went the other way.
Anti-Flag - Die for the Government (1996)

The first and, ahem, the best record by Pennsylvania punk band Anti-Flag, Die for the Government has the upside-down American flag (a common theme on this list) behind the band members. Anti-Flag went on to distance itself from the overtly-anti-American theme of this record. Always sad to see a band move from its roots to accommodate a larger audience.
Jefferson Airplane - Volunteers (1969)

Back in the late '60s all you needed to do to create a controversial album was to throw the American flag on the cover of a decidedly anti-war album and toss in the word "motherfucker" somewhere in a song. Add a few pro-anarchism lyrics, a photo of the band wearing disguises to hide their identity and some pro-Black Panther lines and you have a hit.
The Black Crowes - Amorica

1994's The Hits has Garth Brooks' face covered in the colors of the American flag and honestly, it's a little creepy. He looks a little like an alien, with those wide-open unblinking eyes. Conversely, the songs on this record -- "Friends in Low Places" -- have become downright iconic in country bars and un-air-conditioned gas stations across the South.
Outkast - Stankonia (2000)

Ragged Old Flag is one of Johnny Cash's only super-political albums. While much of his work dealt with ethical, social and political issues, Ragged Old Flag lays it on pretty thick. Even the title track and album opener was a spoken word tribute to America, not a traditional song.
Sly and the Family Stone - There's a Riot Goin' On (1971)

There's a Riot Goin' On by Sly and the Family Stone, released in 1971. The original art had a red, white and black flag with suns instead of stars. Sly told a fan website, "Betsy Ross did the best she could with what she had. I thought I could do better."
Jello Biafra - Become the Media (2001)

If there's an image that can sum up Jello Biafra quickly, it's this one. The American flag strung out as a roll of toilet paper should give you a pretty good idea of what to expect from Biafra's spoken word work, much of which was recorded in Seattle, Denver and Boulder prior to his bid for President in 2000.
Ice Cube - Death Certificate (1991)

Ice Cube's 1991 album, with more piss-and-vinegar than the rest of the artists on this list combined. Just watch the video for "Steady Mobbin" to get a feel for the entire record.
The Reverend John Delore - Ode to an American Urn (2009)

The Reverend John Delore's 2009 debut album is really, really Americana. Listen to Ode to an American Urn here. With lines like "I been up and down the country with a suitcase in my hand / Through the fields and factories, but my baby doesn’t understand," how can it not be more American?
Akron/Family - Set 'Em Wild, Set 'Em Free (2009)

What better album cover for a modern psych-folk band than a tie-dyed American flag? It manages to convey both sides of the band, the roots Americana and the psychedelic, in one simple image. Slightly weird, a bit experimental but mostly American -- Set 'Em Wild, Set 'Em Free uses the stars and stripes to a surprisingly solid effect.
NOFX - War on Errorism (2003)

A quick glance at this album cover is enough to reveal NOFX's opinion of George Bush. Decked out in clown paint with a flag background, it's pretty unmistakable the band wasn't into the former president. Amazingly, the record still picked up a some radio play with its single, "Franco Un-American," and was even featured on an episode of One Tree Hill when one of the characters read aloud lines from "Re-gaining Unconsciousness."
Canned Heat - Future Blues (1970)

The cover for Future Blues, released by LA boogie-rockers Canned Heat, in 1970. They covered "Let's Work Together" by Wilbert Harrison, originally released in 1962, and became a hit again on Future Blues.
Dope - American Apathy (2005)

Aging nu-metal purveyors Dope released American Apathy almost six years ago. Perfect for your rebellious teenager. You can catch Dope at the one and only Gathering of the Juggalos later this year.
Mötley Crüe - Generation Swine (1997)

Generation Swine's most notable quality was probably the return of Vince Neil as the band's frontman, but despite the reunion of classic Mötley Crüe, the record wasn't well-received by fans or critics. While the cover might lead one to believe it's a political record, the songs stood true to Mötley Crüe pedigree, concentrating mostly on drugs, love and prostitution.
Ministry - Filth Pig (1996)

Ministry's sixth studio album, Filth Pig was supposedly derived from a statement made in the British House of Parliament where singer Al Jourgensen was described by Teddy Taylor as a "filthy pig." Regardless, the album curiously features the American flag, not the British one.
MC5 - Kick out the Jams (1969)

There are flags all over this album cover, but the most memorable part of Kick out the Jams is the line, "Kick out the jams, motherfucker." The line was included inside the album's jacket and as the opening to "Kick out the Jams," and managed to stir up controversy with a department store that eventually lead to a censored version of the album and the artwork. Eventually it even forced its label, Elektra to drop the band.
Manowar - Warriors of the World (2002)

Manowar isn't exactly a band that's ever taken seriously, but this album cover, which is filled with various countries' flags, might be one of its more over-the-top moments. But once you dig into the content of the disc it starts to make a bit more sense as a number of the tracks are tributes to fallen heroes from various countries, including Wagner, Pavarotti, Presley and more. Okay, that might be stretching it a bit, but it's awesome looking either way.
Ryan Adams - Gold (2001)

Despite the fact the album cover features Ryan Adams in front of an upside flag, it's a surprisingly America-friendly record. "When the Stars Go Blue," has been covered by a wide range of artists, from Tim McGraw to Bono and "New York, New York," the album's opening track, was a post-September 11 attacks favorite on number of stations.
More slideshows

Arguably the most famous album cover on this list, Born in the U.S.A. by Bruce Springsteen also displays the Boss' backside in addition to the stars-and-stripes. Reagan's campaign famously used the title track in his re-election campaign, not knowing Springsteen's political leanings went the other way.
Play Slideshow