11 Mumblegore Movies You Need to See

Share on Facebook
Tweet
Submit to Reddit
Email
A generation of writers, directors, actors and producers — all in their early to mid 30s, all based in Los Angeles — found each other and together found their voice by making horror films. While a parallel class of young filmmakers on the East Coast found critical acclaim directing micro-budget mumblecore dramas, L.A.’s indie crew is carving a riskier path to lasting success with micro-budget cerebral chillers that eschew cheap kills and studio interference. Call it mumblegore.

Get more mumblegore knowledge with this full feature by Amy Nicholson: Meet the Smart Young Misfits Who Are Revolutionizing Indie Horror Movies
OF 10
PREV NEXT 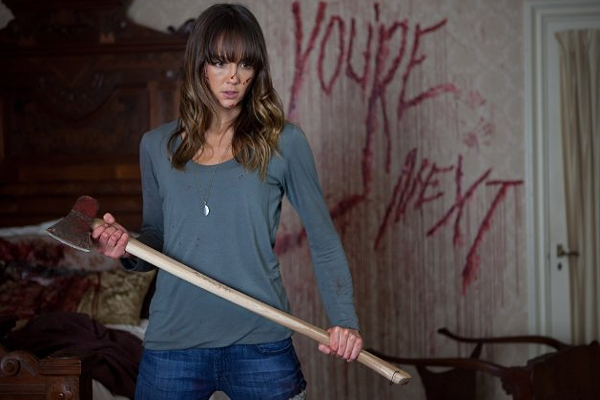 A home invasion slasher with a sardonic twist, You're Next is the best-known flick in the mumblegore canon. It stars everyone from actors AJ Bowen and Amy Seimetz to directors Ti West and Joe Swanberg to Step Up 3D's Sharni Vinson in a standout role as a tough Australian chick who knows how to use a knife. Lionsgate snapped up You're Next at the Toronto Film Fest for a wide release.
V/H/S and V/H/S/2

Consider these two found footage anthology films a quick who's-who of some of the major players of mumblegore. (And both are Sundance-approved.) The first features names like Ti West, Joe Swanberg, Simon Barrett and Adam Wingard as well as a serious commitment to a vintage aesthetic. The closing segment even has a Unabomber joke. The sequel, V/H/S/2, has a bit more splash and some gonzo shorts by The Raid: Redemption's Gareth Evans and Hobo With a Shotgun's Jason Eisener.
HOUSE OF THE DEVIL

In this retro-style Satanist spook story set in the 1980s, our heroine (Jocelin Donahue) wears high-waisted pants and vintage sweaters to a creepy babysitting gig in a rural mini-mansion. Her best friend (Greta Gerwig) begs her not to go, but what harm can there be in making a quick buck watching an elderly lady during a lunar eclipse? Um, a lot.
A HORRIBLE WAY TO DIE

Amy Seimetz stars in this grisly, but patient chiller about an alcoholic who discovers too late that her ex (AJ Bowen), a deranged murderer, has killed his way out of prison and is on his way to find her -- and her new boyfriend (Joe Swanberg). Since she's the one who turned him in, he's probably not expecting a happy reunion.
POP SKULL

When his girlfriend dumps him, a depressed Alabama teenager starts chugging so much cough syrup that he starts to see ghosts. But the ghosts could be real life remnants of a grisly murder/suicide down the block. Director Adam Wingard made Pop Skull for just $2,000 and edited the drug sequences himself while high on Robotussin -- now that's artistic accuracy.
MARTHA MARCY MAY MARLENE

Cannes and Sundance sold this prestigious Elizabeth Olsen film about a cult escapee as a drama, but at it's heart, it's pure mumblegore: a low-budget thriller with plenty of slow-burning scares and at least one bloody death. Martha Marcy May Marlene is one of the best examples of this horror generation's range. It proves audiences don't need zombies and monsters and psychopathic killers when humanity is scary enough.
CHEAP THRILLS

Two old high school friends (Pat Healy and Ethan Embry) bump into each other at a bar. Both are broke, so they eagerly go head-to-head when a millionaire (David Koechner) and his icily beautiful wife (Sara Paxton) offer to pay $500 to whoever can hold their breath the longest. As the booze, drugs and dares escalate, it's clear neither man will leave unscarred -- not when there's money to be made by cutting off a pinkie. Directed by E.L. Katz.
THE SIGNAL

In the middle of the night, all TVs start emitting a frequency that makes everyone in town want to kill. What sells this $50,000 flick isn't just its trust-no-one premise. It's that The Signal is literally divided into three acts -- or "transmissions," as it calls them -- by three different young director, each of whom spins the story in their own way, from an action-thriller to a black comedy.
24 EXPOSURES

Vice Magazine gave director Ti West their blessing to use their brand in this upcoming found footage flick about two thrill-seeking journalists (AJ Bowen and Joe Swanberg) who uncover a Jim Jones-style cult full of machine guns and rapt devotees. They've stumbled across a literally killer story -- but can they escape before the group's quiet, but powerful leader (Gene Jones) breaks out the Koolaid?
More slideshows

A home invasion slasher with a sardonic twist, You're Next is the best-known flick in the mumblegore canon. It stars everyone from actors AJ Bowen and Amy Seimetz to directors Ti West and Joe Swanberg to Step Up 3D's Sharni Vinson in a standout role as a tough Australian chick who knows how to use a knife. Lionsgate snapped up You're Next at the Toronto Film Fest for a wide release.
Play Slideshow