10 St. Louis Bars to Put You in a Literary State of Mind

Leave the library for scholars and coffee shops for poseurs; when we're reading for pleasure, we'll pick a bar any day. What can we say? Sometimes we just really want to immerse ourselves in the book we're reading, to feel like we're drinking with our favorite protagonist. Don't judge; a method actor can stay in character for months and no one questions it. Maybe we can make method reading the next big thing in St. Louis.

Here are the ten literary works we're paging through this year, each perfectly paired with a St. Louis bar and, yes, a cocktail to match.

The Great Gatsby, by F. Scott Fitzgerald
Mint julep
Thaxton Speakeasy (1009 Olive Street, 314-241-3279)
Everything about Gatsby was extravagant. His parties were pure spectacle, which along with the temptations of Prohibition inspired Thaxton Speakeasy. No invitation is necessary, although to get into this downtown bar you'll need the password. To take things all the way (because Gatsby wouldn't have it any other way), order the mint julep with Four Roses. Four Roses is one of the few distilleries that actually continued producing bourbon through the 1920s, citing its medicinal values. Don't tell that to F. Scott Fitzgerald, whose death from a heart attack at age 44 was almost certainly related to his alcoholism. Instead, swing by the Thaxton for Prohibition Night some Thursday and get your Charleston on. Grab that mint julep and, as Daisy tells her lunkish husband, maybe you "won't seem so stupid to yourself." 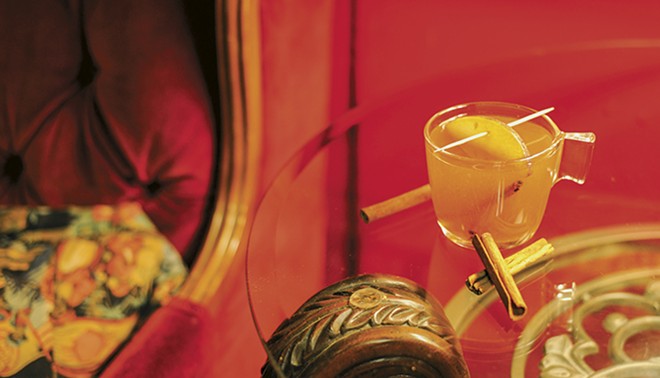 The House of the Spirits, by Isabel Allende
Spiked hot cider with brandy
Propaganda (2732 Cherokee Street, 314-769-9696)
Blanca and Pedro's love is first burdened by class barriers and then again when Pedro is banished after proclaiming his socialist ideals with the other workers at the Hacienda. Propaganda would have been a great place for Pedro to organize a rebellion for the people — and also would provide many hidden rooms to take refuge from a military coup. Drink spiked hot cider with brandy (we guarantee it's not poisoned), while you take in this novel of love, life and Latin American history. Viva la revolución!

Hell's Angels: The Strange and Terrible Saga of the Outlaw Motorcycle Gangs, by Hunter S. Thompson
Shot of Wild Turkey
Off Track Saloon (7301 South Broadway, 314-457-0338)
At this biker bar deep down in the city's Patch neighborhood, everyone seems to know each other. And Judy, the bartender, keeps slinging the Wild Turkeys (only $3 on Wednesdays). Remaining a fly on the wall here is no option. Thompson once questioned if he was researching the Hell's Angels or slowly being absorbed by them — something you may find yourself wondering as you get to know Off Track's denizens. We quickly made friends with a few fellows at the end of the bar, one of them a railroad worker who boasted that he knew the best bars in St. Louis and another gent with a less prominent MC emblem across his leather jacket. The men poked fun at one another and told wild stories of their adventures — a pasttime of which surely the father of gonzo journalism would approve.

The Picture of Dorian Gray, by Oscar Wilde
Sazeracbr>Bar Les Freres (7637 Wydown Boulevard, Clayton; 314-725-8880)
Oscar Wilde famously used absinthe to help him write. "After the first glass of absinthe you see things as you wish they were," he wrote. "After the second you see them as they are not. Finally you see things as they really are, and that is the most horrible thing in the world." Maybe not at this lovely Clayton bar, however. Walking into Bar Les Freres, you can't help but think of Wilde's The Picture of Dorian Gray. The walls are lined with portraits, most of them acquired from various estate sales. Don't let the cracks in the varnish distract you from the silver platters and beautiful garnishes. After all, these portraits are surely the most perfect version of these nameless individuals. Who knows; maybe Dorian is in plain sight on one of the walls? A classic sazerac will surely summon the truth without the horror.

I Know Why The Caged Bird Sings, by Maya Angelou
"Wrong Is the Day"
Planter's House (1000 Mississippi Avenue, 314-696-2603)
I Know Why the Caged Bird Sings is not the most flattering look at Prohibition-era St. Louis. As Angelou wrote about her arrival, “St. Louis was a new kind of hot and a new kind of dirty. My memory had no pictures of the crowded-together soot-covered buildings. For all I knew, we were being driven to Hell and our father was the delivering devil.” Perhaps in this day and age Angelou would have had a little more hope for our great city. Not far from her childhood home at 3130 Hickory Street lies Planter’s House, an inclusive bar that pays ode to Tom Bullock, the first African American to write a cocktail book. Planter’s House also has multiple options that involve sherry, Angelou’s drink of choice. Take a seat at the handsome bar and try “Wrong Is the Day,” an apple brandy base topped with Cynar, oloroso sherry, walnut liqueur and a dash of bitters. 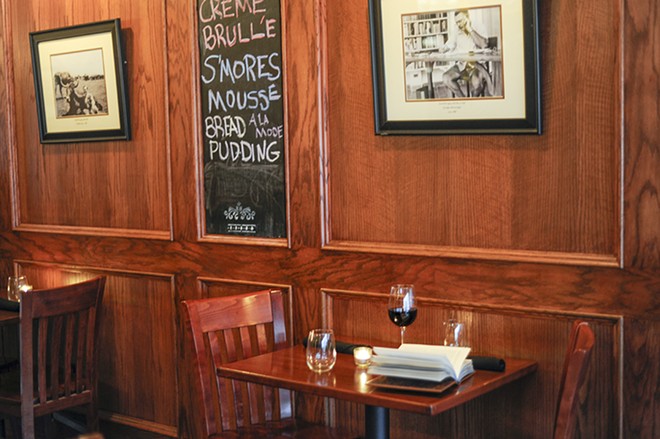 The Sun Also Rises, by Ernest Hemingway
A bottle of Saint Cosme Côtes du Rhône
Ernesto's Wine Bar (2730 McNair Avenue, 314-664-4511)
Hemingway once described The Sun Also Rises as a story about a bunch of drunks, and by God we're pretty sure they are drunk throughout the entire book. With more than twenty bottles of wine consumed throughout these pages, the obvious location to commune with Lady Brett and Jake Barnes would be Ernesto's Wine Bar, the Hemingway-themed watering hole tucked into the lovely corner of McNair and Lynch in Benton Park. While we were disappointed that the famous Hemingway Daiquiri (half the sugar and twice the booze) wasn't on the menu, Ernesto's plethora of French and Spanish wines is quite fitting for this classic. Whether you're escaping your friends or finding your company in wine as Jake does, a bottle of Saint Cosme Côtes du Rhône, a palatable French wine intended to be consumed during the day, will get you in the mood for erectile dysfunction and doomed love.

One Hundred Years of Solitude, by Gabriel García Márquez
Rum and Coke
Venice Cafe (1903 Pestalozzi Street, 314-772-5994)
Jose Arcadio Buendia dreamt of a city with mirror-like walls. While Buendia interpreted the mirror walls as ice, the reflective and disjointed mosaics of Venice Cafe seem quite fitting for Gabriel García Márquez's magical realism. The walls at Venice Cafe are littered with memories, reminding us of our childhood perception of McDonald's — the most wonderful oasis, where you could escape reality and perhaps the Banana Massacre. A dose of real talk: The McDonald's on Jefferson is not the oasis you believed in your naive nativity. It is, in fact, terrible. Don't make yourself crazy living in a fantasy world. Instead, escape reality with a rum and Coke at a neighborhood bar with mirrors, ashtrays and free toys cemented in the wall.

Giovanni's Room, by James Baldwin
Vieux carre
The Monocle (4510 Manchester Avenue, 314-932-7003)
In Giovanni's Room, much of the plot has to do with David's inability to break through social and societal barriers to embrace his own sexual freedom. At one point, Jacques buys David a cognac at Guillaume's bar and urges him to accept and embrace his feelings toward Giovanni. While the Monocle, similarly to Guillaume's bar, is a "noisy, ill-lit sort of tunnel" with an air of Paris, it is also a place focused on inclusion and sexual celebration. Order a vieux carre with its freeing dose of whiskey, cognac and vermouth, see a burlesque show and be yourself and love freely.

Dracula, by Bram Stoker
A glass of cabernet
Pagan Wine Bar (239 N. Euclid Avenue, 314-677-7214)
While Pagan Wine Bar owner Ed King is an utterly seductive bartender, you can leave the garlic and trinkets of deceit at home. This intimate bar in the Central West End is full of seductive paintings and odes to the sexy femme. You don't need to wait until St. George's Night to enjoy your glass of deep red cabernet, hand-chosen by King based on what he's feeling most beguiled by. Pagan Wine Bar is only open from dusk 'til the stroke of midnight, giving patrons plenty of time to make it back to the wooden box before dawn.

White Teeth, by Zadie Smith
"Icelandic Pear"The Gin Room (3200 South Grand Boulevard, 314-771-3411)
Zadie Smith's 2000 debut novel explores the lives of immigrants and their offspring making their way in an increasingly multi-cultural London — and how better to celebrate both White Teeth's milieu and its funny, warm-hearted spirit than with a spot of gin? The proprietor of the Gin Room, Natasha Bahrami, knows a bit about straddling two worlds; she practically grew up in Cafe Natasha, the Persian restaurant her Iranian ex-pat parents founded in St. Louis. Now she's opened a gin joint right next door to celebrate her favorite spirit. Sit down with White Teeth and toast her family with the Gin Room's signature "Icelandic Pear" — London dry gin, honey, cardamom, ginger, Moroccan mint green tea syrup and pears poached in brandy.