JENNIFER SILVERBERG Mai Lee has long been one of the area's best restaurants.

If you're looking for restaurants that seem more St. Louis than the Arch itself, we've compiled a list of ten true classics. Some predate Eero Saarinen's giant horseshoe by not just years, but decades, while others are relative newcomers — but all offer a taste of the city that's more timeless than trendy. Sink into a booth with a chocolate malt, sit up a little straighter at the city's grandest old-school steakhouse, or try the barbecue that launched a revolution. No matter which you choose, you won't leave hungry.

Mai Lee
8396 Musick Memorial Parkway, Brentwood; 314-645-2835
Lee Tran opened Mai Lee 30 years ago as a Chinese restaurant, unsure whether St. Louis diners would be receptive to the cuisine of her homeland, Vietnam. Eventually, though, Tran could not resist the urge to honor her heritage and began adding traditional Vietnamese dishes to the menu. She need not have worried. From those humble beginnings, her restaurant has grown into not just one of the city's best Vietnamese restaurants but one of its most beloved restaurants period, anchored by a menu of innumerable Chinese and Vietnamese dishes that are all cooked with the love you only get from a mom's home-cooking. Her pho is legendary, but she makes it difficult to choose from her hundred-plus dishes — each as good as the next. And don't feel bad asking for a recommendation: She and her son Qui have every last one memorized and are more than happy to play the role of host and hostess.

Crown Candy Kitchen
1401 St. Louis Avenue, 314-621-9650
In the century that Crown Candy Kitchen has been holding court over the corner of St. Louis Avenue and 14th Street, much has changed in the world of ice cream and confectionary. These days, you're more likely to find a storefront dedicated to nitro-churned tapioca ice or freeze-dried dots than an old-fashioned soda fountain. However, this beloved St. Louis institution has weathered the ups, downs and trends of the business without skipping a beat, proving that there is always a place for the classics. Its sundaes are legendary, topped with everything from hot chocolate to marshmallows to buttered pecans, and its malts are so quintessential you'll feel like you're traveling back to the time of old-school soda jerks. You could make an entire meal out of dessert here, but sweets are not the only things that make Crown Candy such a landmark. The restaurant's signature sandwich, the "Heart Stopping BLT," is a no-nonsense pile of so much bacon you'll want to put your cardiologist on standby. It's a classic sandwich done well in a classic place — the key to staying power.

Charlie Gitto's on the Hill
5226 Shaw Avenue, 314-772-8898
Legend has it that, in Charlie Gitto's previous incarnation as Angelo's, the kitchen gave birth to one of the icons of St. Louis cuisine: the toasted ravioli. According to the story, a chef accidentally dropped a ravioli in hot oil instead of water, crisping up the exterior to a delicious golden brown. These days, it's difficult to imagine Charlie Gitto's doing anything by accident, no matter how delicious the results. This lovely restaurant is the standout in a neighborhood filled with Italian restaurants, its success the result of its ability to hit just the right note between pedestrian red sauce and stuffy tableside service. Charlie Gitto's is more upscale than some of its neighbors and yet not as formal as others — a place to go if someone in your party wants a simple pizza while you are craving an elegant veal saltimbocca. That it can do both with aplomb, and for more than three decades at that, is certainly no accident.

Tony's
410 Market Street, 314-231-7007
Tony's is not just St. Louis' finest restaurant. It's so legendary that it has become shorthand for excellence in the city's dining scene — an elder statesman so revered around town its name can be used as an adjective: "It's nice, but not 'Tony's nice.'" For more than six decades, this family-owned Italian restaurant has maintained a standard of excellence many never achieve, earning accolades, awards and distinctions like AAA's Four Diamond rating several years running. It's a place where you'll see business deals being inked, proposals made and milestones celebrated over excellent cuisine, but the key to Tony's staying power is its unwavering hospitality, provided to every last guest who walks through the door. Patriarch Vincent Bommarito holds court over the place, working the dining room like he's the don of a private club and making his guests feel like they are exclusive members, even though all it takes to get in is a reservation and a dinner jacket. A meal here is always a special occasion, even if that occasion is "just because."

Goody Goody
5900 Natural Bridge Avenue, 314-383-3333
St. Louis is blessed with an embarrassment of riches when it comes to diners, but Goody Goody stands out in this crowded field with both its pull of nostalgia and its quintessential lunch-counter fare. Now in its seventh decade, the beloved establishment is a stroll back in time to when breakfasts were big, coffee came from a glass pot on a hot plate and ordering a platter of country-fried steak seemed like the best decision you could make before noon. A must-stop for politicos and celebrities passing through town — even Joe Biden has paid a visit — Goody Goody is more than just a diner: It's an institution for a number of reasons, not the least of which are its chicken and waffles. Long before the dish became trendy, Goody Goody has been serving up searing-hot fried chicken alongside its malty waffles to hungry diners craving that perfect blend of sweet and savory. For a St. Louis signature, try the slinger, a mess of two hamburger patties, two eggs, hash browns, chili and cheese with a side of bread or pancakes, a gut-bombing but delicious dish that is tailor-made for soaking up a night of imbibing. You can't go wrong at this gem of a place. 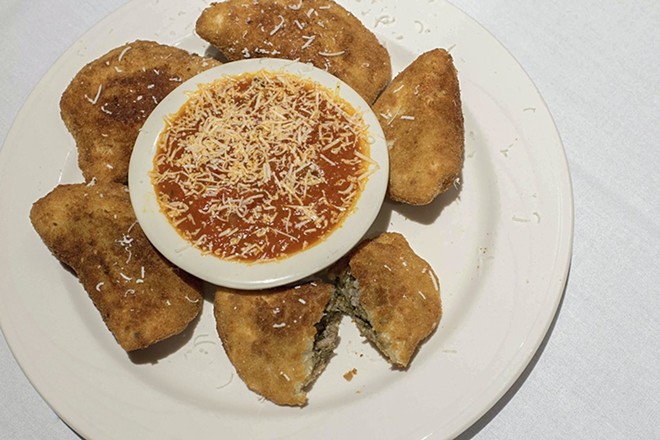 Lombardo's
201 South 20th Street, 314-621-0666
Ask anyone in town what food defines St. Louis, and toasted ravioli will unquestionably be near the top of that list. The deep-fried pillows of meat-filled pasta, served with a side of marinara for dipping, are ubiquitous throughout the city, found everywhere from bars to white-tablecloth establishments. Many claim to be the first to serve this addictive finger food, but none do it so well as Lombardo's, the upscale Italian trattoria whose flagship next to Union Station serves the best rendition in town. Lombardo's is an elegant establishment and therefore one of the last places you'd expect to have perfected something referred to as "t-ravs," but its plump, half-moon pillows elevate the dish beyond simple bar food. Filled with a blend of meat, spinach and romano cheese, Lombardo's rendition is the Rolls Royce of fried pasta. And thought it may be hard to believe after experiencing such hors d'oeuvres bliss, there is much more to this wonderful restaurant than just appetizers. Sure, toasted ravioli may be the claim to fame, but the fresh pastas, chicken, steaks and veal will make you want to save room for the main course, no matter how hard of a case those t-ravs make to the contrary.

Blueberry Hill
6504 Delmar Boulevard, University City; 314-727-4444
An establishment that basically boasted Chuck Berry as its house band is hallowed ground in St. Louis, and Blueberry Hill certainly owns that status. Smack-dab in the middle of the bustling University City Loop, Blueberry Hill may be a worthy bar and grill, but at its heart it is a temple to music, with a legendary jukebox that fills the sprawling space with infectious energy. Helmed by Joe Edwards, the popular spot singlehandedly transformed its strip of U. City from a blighted wasteland to a shopping-and-dining district since its 1972 opening, and it continues to reign over the area as a must-visit for tourists. Burgers are legendary, and don't forget to add a side of "Buffalo fries," which beg to be washed down with a beer from the restaurant's impressive selection. But the best dish at this place is the music — whether blaring over the speakers or live from the stage, the tunes prove that Blueberry Hill's legendary rock & roll ethos is all the main course you need.

Al's Restaurant
1200 North 1st Street, 314-421-6399
The same family has owned Al's in the same location for 93 years now, which tells you a lot about the experience you'll have at this classic old-school St. Louis restaurant. The waiters here are almost universally old enough to be your grandfather, and they'll walk you through the dinner options; Al's regulars won't stand for those newfangled paper menus. Settle back in the hushed, old-fashioned dining room and start with the terrific lobster bisque and a classic Caesar, prepared tableside. And why not try Al's signature, the Beef Romano? It's a filet mignon stuffed with prosciutto and romano cheese, then breaded and served with marsala sauce. They don't make specials like this anymore. You won't possibly have room for the chocolate souffle, which is good because you had to order that yesterday when you made your reservation. Perhaps a bite of bananas foster? Yes, it's that kind of place. And while it will cost you an arm and a leg, for several generations of St. Louisans celebrating special occasions, Al's has been unquestionably worth it.

Pappy's Smokehouse
3106 Olive Street, 314-535-4340
Before Pappy's Smokehouse came on the scene, the words "barbecue" and "St. Louis" conjured up little more than backyard pork steaks covered in bottled sauce. Then came Mike Emerson and Skip Steele, who had a vision for making world-class barbecue right here in the Gateway City, and the St. Louis 'cue scene would never be the same. The lines started on Day 1 with hungry guests queueing up for Pappy's succulent pulled pork, brisket and legendary dry-rubbed ribs, and they continue ten years later, even as the city's barbecue scene grows more crowded by the day. Pappy's is the undisputed king of St. Louis barbecue, the standard-bearer and the spark that launched the city's barbecue into the national spotlight — but ultimately, it's just really damn good barbecue.

Imo's Pizza
1000 Hampton Avenue, 314-644-5480
Few foods evoke such unwavering admiration and utter contempt as St. Louis-style pizza. If you're a native, the ultra-thin, Provel-covered pie is not only a delicacy — it's a source of civic pride. If you're not from here, chances are you'll view this cracker-like circle of goo with curiosity at best and horror at worst. Whatever your take, the one thing agreed upon is that there is no place like Imo's to experience the Gateway City's contribution to the genre. Nicknamed "the square beyond compare" for its square-shaped slices, Imo's pies are the quintessence of St. Louis pizza: thin, crisp, tomato-sauce-coated and smothered in Provel, a processed cheese blend of cheddar, Swiss and provolone that becomes almost liquid when melted. (Pro tip: You might be tempted to dig right in, but you have to let the pizza cool or else the cheese will painfully stick to the roof of your mouth.) Though St. Louis-style pizza is ubiquitous throughout the city that gave it its name, Imo's is the version that put the option on the map, and its flagship pizzeria on Oakland Avenue is the place to go if you want to experience it in all of its cracker-crust glory. "Real" pizza it may not be, but it sure is delicious.