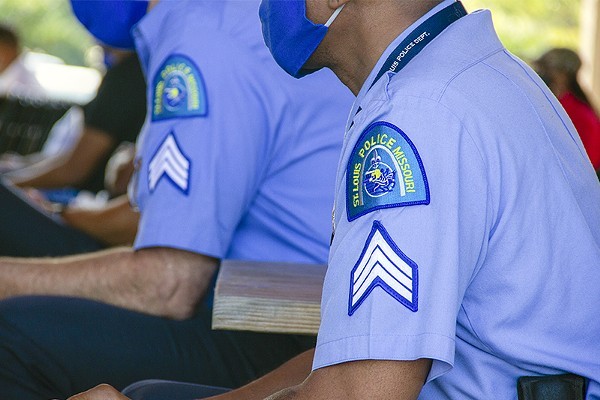 A lawsuit from the City of St. Louis seeks to block a 2021 law that created a suite of new protections for police officers. The suit alleges the provisions created a system of "pervasive favoritism" benefitting cops while neglecting to create a constitutionally required funding source for the city's expanded legal obligations.

Filed Friday, the lawsuit targets Senate Bill 26, which was passed by the Missouri legislature and signed by Governor Mike Parson in July. The law went into effect in August.

The bill generated widespread controversy and opposition. It not only created new criminal offenses targeting protesters who block roadways, but also special protections for police officers under investigation for abuse. Under the bill, departments must give officers accused of misconduct prior notice of an investigation, while also imposing a 90-day limit on the investigation itself.

In the run-up to the bill's passage, its sponsor, Sen. Bill Eigel (R-Weldon Spring) argued that the protections were required in light of the threat posed by "Black Lives Matter and Antifa that are falsely accusing our police of being something other than what they are: namely, the honorable protectors of our communities."

However, St. Louis police officials came out against the bill. In a letter to Eigel and other lawmakers, St. Louis police Chief John Hayden warned that the then-proposed requirements could act as a "tip off," allowing dirty cops to cover their tracks in advance of an investigation, unfairly giving police "rights beyond that of the average citizen accused of criminal behavior."

The new lawsuit makes a similar argument, noting that the so-called "police officer bill of rights" amounts to a "pervasive favoritism" based solely on the status of a city employee's role as an officer, noting, "even units of public employees who are indisputably public safety employees — like fire fighters, emergency first responders, corrections officers — are not subject to the due process protections contained" in Senate Bill 26.

The lawsuit makes several arguments that the bill is unconstitutional, including that it contains too many provisions, thereby violating the state's "single subject" requirement for legislation. The suit also argues that the bill imposes increased costs needed to defend the City in cases involving police officers under internal investigation — but without creating any new appropriations or funding source for the expense.

In a statement, City of St. Louis spokesman Nick Dunne said the bill, "is an unfunded mandate that subverts equal protection guaranteed under the law."

Read the full lawsuit below: