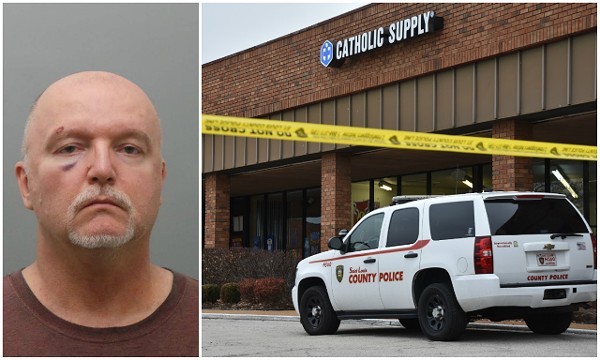 Nearly three years after Thomas Bruce attacked three women at a Catholic Supply store in Ballwin — fatally shooting one who refused his sexual assault — the 56-year-old Jefferson County man has been sentenced to life in prison.

Bruce pleaded guilty Thursday in St. Louis County to a single count of first-degree murder. As part of the plea, the Jefferson County Prosecutor's Office is dismissing a pending case involving a separate, but similarly brutal attack and sexual assault on a woman in her home near Hillsboro.

In the Jefferson County incident from September 27, 2018, Bruce was accused of attacking a 77-year-old woman with whom he had no previous connections, initially leaving investigators with few leads to follow.

Then, on November 19, less than two months after the attack in Jefferson County, Bruce walked into the Catholic Supply location in Ballwin, where he forced three women into a back room, ordered them to perform sex acts, and then shot Jamie Schmidt, who police believe refused him.

After Bruce's arrest in the Catholic Supply attack, police said the earlier victim in Jefferson County recognized him from his mugshot and contacted authorities. In January 2019, prosecutors filed new charges against Bruce for burglary, kidnapping, assault, sexual abuse and harassment.

In a statement released Thursday, Jefferson County prosecuting attorney Trisha Stefanki said that she and her staff had consulted with the victim before Bruce's guilty plea.

"The Victim, as well as our office, agree that having a guaranteed life sentence without the possibility of parole is a satisfactory resolution," Stephanski said. "The Victim is ready to move on and not discuss the incident any further."

Before taking the plea deal, Bruce had been scheduled to face trial next week. He is not eligible for parole.

In a press release from the St. Louis County Prosecutor's Office, Bruce was described as preparing "a handwritten statement" for Friday's sentencing hearing, but he later decided not to read it.

“These victims and their loving families are my heroes,” St. Louis County Prosecuting Attorney Wesley Bell said in a statement. "Though they were well prepared to tell their stories in open court, we are relieved that this guilty plea brings them some closure now — and the knowledge that this predator will spend the rest of his life in prison with no possibility of parole. I thank them, the detectives and our trial team for their hard work in bringing justice."

This story was updated after publication to include comments and details from the St. Louis County Prosecutor's office.