'Some of the Officers Are Criminals,' Says Attorney in Police Protest Case 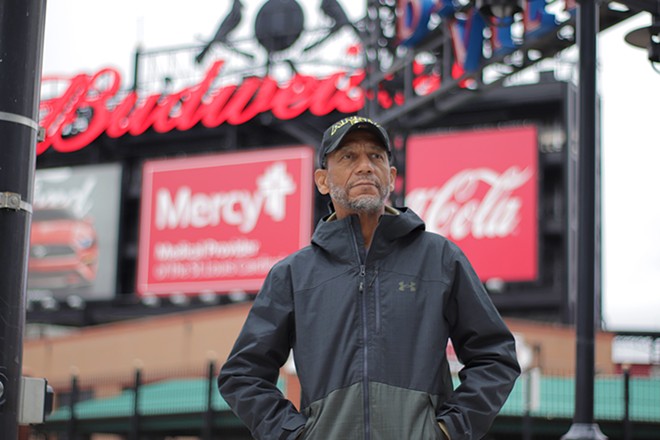 The city's long-running prosecution of a St. Louis pastor and a police protester is, at its core, a case of "Who do you believe?"

It began in September 2017 when the Reverend Darryl Gray and Calvin Kennedy were arrested outside of Busch Stadium during the protests that followed the acquittal of a white police officer in the killing of a Black man.

Police claimed Gray, then 63, attacked officers without provocation, and then Kennedy jumped in.

In the four years since then, the two men and the city have been locked in a seemingly endless legal battle. The city won an early round, securing convictions in municipal court, but Gray and Kennedy appealed, hoping to force a jury trial in state court. That fight is still going today.

See Also: The Exhausting Prosecution of the Rev. Darryl Gray

In the latest hearing, held last week, attorney Javad Khazaeli pushed again for a jury trial, but also for more information about the police officers at the center of the city's case.

Limited video from outside the stadium on September 29, 2017, captured the events just before and after the initial clash between police officers and Gray, leaving a gap of a crucial few seconds to be filled in by police and other eyewitnesses. Those accounts vary wildly, and Khazaeli says revelations over the past four years show there is even less reason to take the word of the officers.

"To put it point blank," he said at last week's hearing, "some of the officers are criminals."

Of three officers endorsed as witnesses by the city, one has been indicted on federal forgery charges, another was reportedly being forced out of the department for an off-duty overdose, and the third is said to be on the St. Louis Circuit Attorney Office's "exclusion list" of cops who can't be trusted to present cases or testify, Khazaeli says. Other officers on scene that night as part of the police department's former Special Ops unit included one who was charged — and later acquitted — in a pair of assault cases and another officer accused of rape, according to Khazaeli.

"A poorly-written cable movie could not concoct a scenario more absurd than these five officers being on the same unit, being at the same incident, and being the backbone of litigation with a maximum fine of $500," the attorney wrote in a court filing. "Instead of investigating how five of the nine officers from the Special Ops team could all be involved in a litany of corrupt acts, the City has chosen to focus on Defendant."

Khazaeli alleges the city is fighting against a jury trial (while continuing to pursue prosecution) for a couple of reasons — primarily to avoid exposing damning information about crooked cops that could hurt the city in a separate civil rights lawsuit Gray, Kennedy and other protesters have filed in federal court.

"The only reason they're doing this is they know they're screwed in the federal case, and they're harassing these two men, trying to get an advantage in the civil case," Khazaeli says in an interview.

City attorneys, first under then-Mayor Lyda Krewson and now under Mayor Tishaura Jones, have argued for several years that the charges are similar to a traffic ticket and don't meet the threshold for a jury trial. Khazaeli disagrees, arguing that the potential fines of $500 make the charges a misdemeanor and eligible for a jury trial.

"I'm very disappointed the Jones administration is still making these arguments," Khazaeli adds. "We were hopeful they would see the error of the ways of the Krewson administration, which has consistently tried to protect corrupt police officers. The idea that U.S. Constitution does not allow Black men to have jury trials or even get evidence of the witnesses testifying against them flies in the face of justice."

A spokesman for Jones said the city wouldn't comment on pending litigation but that the new city counselor was reviewing the case.

Three of those officers referenced by Khazaeli are no longer employed by the department. That includes Ronald Vaughan, once a city detective assigned to Special Ops, who claimed Gray shoved him in the chest as Vaughan tried to politely talk him down. That conflicts with the accounts of pastors who marched alongside Gray that evening. They claimed officers manhandled two female clergy members as the group tried to make it through a busy intersection, and when Gray protested, vocally, he was body-slammed and pepper sprayed.

In February, Vaughan was charged with felony forgery after he was accused of faking a doctor's note to get out of work, claiming that he would need to quarantine for two weeks with COVID-19 symptoms. Charges against him are still pending. Vaughan is no longer on the force, a police spokesman confirmed on Monday.

Another of the city witnesses is Kyle Chandler. He is probably best known in St. Louis as the police officer who shot Mansur Ball-Bey in 2015 after he and Vaughan claimed the eighteen-year-old pulled a gun on them — a claim Ball-Bey's family has long disputed.

Khazaeli said in court filings that a former officer, who was being deposed in a separate case, said Chandler was later assigned to desk duty and slated for termination after he overdosed off-duty. A police spokesman declined to comment on details of the suit or specific allegations but confirmed Chandler's employment with the department ended in May.

A third city witness, police officer Larry Wentzel, is the one who body-slammed Gray. Khazaeli has fought to force the city or the Circuit Attorney's Office to provide information that would show whether Wentzel is on the Circuit Attorney's secret exclusion list. Khazaeli says he asked all the officers during depositions if they were on the list, but when it came to Wentzel, city attorneys jumped in, instructing him not to answer before cutting the deposition short.

Another officer later claimed in a deposition that Wentzel was in fact on the list and not allowed by the Circuit Attorney's Office to testify in cases, Khazaeli says. Wentzel remains on the force.

Assistant City Counselor Adriano Martinez said at last week's hearing that Khazaeli was misstating the deposed officer's comments when it came to Wentzel. The officer said he had heard Wentzel wasn't allowed to testify but didn't testify he knew for certain, according to Martinez.

And like Khazaeli, Martinez insists this case is really about the federal civil rights lawsuit, not low-level criminal charges — but he says the motivations for pressing on are not the city's, but those of Khazaeli and his clients.

"This is an effort for him to advance his federal case," the assistant city counselor said at the hearing.

As far as verifying whether Wentzel is on the list, the city says that info would have to come from the circuit attorney. Khazaeli subpoenaed the Circuit Attorney's Office, but an attorney from that office attended last week's hearing to say in person what they had already said in a letter: The circuit attorney doesn't plan to comply with the subpoena, given that they are not the ones prosecuting Gray and Kennedy.

That is one of the maddening parts of the case, according to Khazaeli: Neither the city nor the circuit attorney wants to release additional information about the officers, and each says it would be the other's responsibility.

"This case needs to come to an end," Khazaeli says. "We need our day in court."

The case sits with St. Louis Associate Circuit Court Judge Nicole Colbert-Botchway. She promised to take the issues raised at the hearing under advisement.