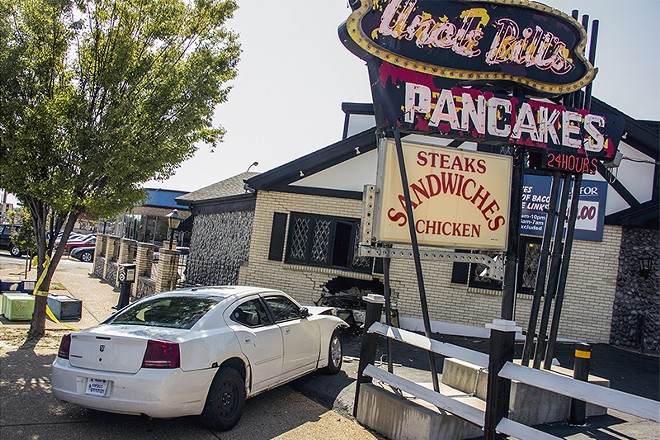 A vehicle crashed into Uncle Bill's Pancake House early this afternoon, injuring four people. The incident, which was first reported by KSDK, involved a white Dodge Challenger that slammed into the northwest side of the building near the intersection of South Kingshighway Boulevard and Potomac Street.

The collision a ripped a hole into the building. Along with multiple police vehicles, a flatbed truck arrived to clear the vehicle from the scene at around 2:30 this afternoon.

The St. Louis Metropolitan Police Department was dispatched to the longtime south St. Louis restaurant at 12:31 p.m. to respond to an "accident with injuries." A spokesperson for the department says that EMS was called, but no further information about the circumstances that led to the crash is available at this time.

The St. Louis Fire Department reports that the driver of the Dodge Challenger and a waitress from Uncle Bill's were taken to the hospital via EMS with serious, but non-life-threatening injuries. Two restaurant patrons self-transported for medical care.

This is the second time a car has crashed into a South St. Louis restaurant in the past 24 hours. On Sunday afternoon at 4:16 p.m., police responded to an incident in which a Kia Sportage struck the popular South Grand ice cream shop, Tower Grove Creamery. The driver, a 56-year-old female, did not suffer any apparent injuries and no one was transported to the hospital. No further details about the incident are available.

The Riverfront Times has reached out to Uncle Bill's Pancake House and will update this post as more information becomes available.