Despite Pardons, the McCloskeys' Law Licenses Are in Jeopardy 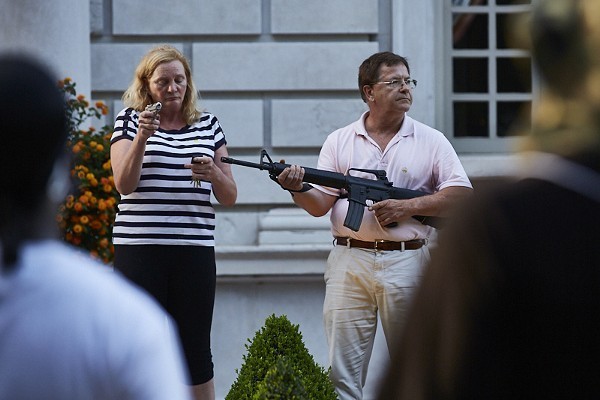 After pleading guilty to misdemeanors in June, Mark and Patricia McCloskey enjoyed the promised pardon from Missouri's governor — but that hasn't stopped the state's top legal disciplinary official from recommending the suspension of their law licenses for the actions that put them in the public eye.

The McCloskeys, both attorneys, are now facing legal proceedings that could end in disciplinary actions. The process was initiated by Missouri's chief disciplinary counsel, Alan D. Pratzel, who in court filings last week cited the couple's guilty pleas and statements earlier this summer as support for suspending their law licenses.

The McCloskeys pleaded guilty almost exactly one year after the two lawyers became national icons for a Republican Party still in the throes of the 2020 election cycle.

On June 28, 2020, protesters marching through a private street in the Central West End — on their way to demonstrate outside the then-mayor's home — found themselves in the sights of a rifle and pistol wielded by the two attorneys, both having rushed out of their opulent mansion to confront the crowd.

While Mark and Patricia would later claim that their actions were in response to "fear of imminent harm," that claim would ultimately fail to sway a special prosecutor, who found "there was no evidence that any of [the protesters] had a weapon" and that the crowd had "peacefully exited the neighborhood."

As part of the plea deal, Mark McCloskey pleaded guilty to assault in the fourth degree, while his wife pleaded guilty to second-degree harassment. Both agreed to pay fines and to relinquish the firearms used in the incident.

But while those convictions have been wiped out by Governor Mike Parson's pardon, their law licenses are still in jeopardy. In legal filings first reported by Kansas City NPR affiliate KCUR, the state's chief disciplinary counsel argued that the June 28 incident showed "indifference to public safety” and involved "moral turpitude."

Pratzel, who has worked in Missouri's disciplinary system since 1985, is recommending the state's Supreme Court suspends both attorneys' licenses indefinitely, though under the recommendation the two would be allowed to apply for reinstatement after six months.

According to KCUR, Pratzel's motion in support of disciplining the attorneys quoted Mark McCloskey's statements delivered from the courthouse steps on June 17, 2021, immediately after pleading guilty to the misdemeanors:

"The prosecutor dropped every charge except for alleging that I purposely placed other people in imminent risk of physical injury; right, and I sure as heck did," Mark McCloskey said at the time. "That’s what the guns were there for and I’d do it again any time the mob approaches me, I’ll do what I can to place them in imminent threat of physical injury because that’s what kept them from destroying my house and my family."

The suspension of their law licenses would mark a new chapter for the McCloskeys. Before their rise to the limelight as the "St. Louis gun couple," they had used their status as lawyers to repeatedly sue their neighbors for a host of seemingly petty items.

In one notable incident, documented in a barnstorming piece of investigative journalism by St. Louis Post-Dispatch reporter Jeremy Kohler, Mark McCloskey destroyed a beehive near his mansion and threatened to sue the synagogue that had planned to harvest the honey for the Jewish holiday of Rosh Hashannah.

Mark McCloskey is currently among a scrum of Republican candidates seeking to fill the U.S. Senate held by Roy Blunt, who is not running for reelection.

As of publication, McCloskey has not addressed the disciplinary proceedings or Pratzel's motion seeking the suspension of his law license.