37 Storm-Tossed Dogs Arrive in Missouri After Rescue in Louisiana 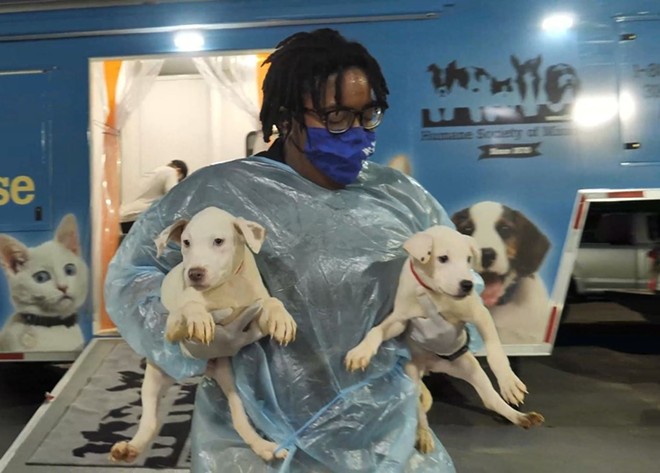 Deployed for seven days, the Missouri team worked alongside the Louisiana Society for the Prevention of Cruelty to Animals to provide support for animal rescue and recovery operations after the storm.

“As soon as we saw what was coming with Hurricane Ida, we began preparations here in St. Louis to go to the affected area and help them with whatever they needed," said Ella Frank, Assistant Director of the Humane Society's Animal Cruelty Task Force.

In a press release, Frank noted, "While its always heartbreaking to find a stray away from its home and with no identifying information, knowing that we can recover that animal and ensure that it will get the nutrition and medical attention it needs is very satisfying."

The next step for these pups will be recovery and preparation for adoption. At least seven require treatment for heartworm and "will need expensive, extended care" before they can be adopted.

Pups in peril weren't the only animals in Louisiana to find themselves on receiving end of helpful Missourians. In a Tuesday tweet, Ameren Missouri revealed that a crew restoring power in Louisiana over the weekend discovered a dehydrated horse left tied to a tree, apparently abandoned.

The horse was transported to a foster farm. That's when Ameren Missouri employees stepped in, taking up a collection to pay the veterinary bills.

The company tweeted, "As a result of our kindhearted and generous coworkers, the horse, now called Ameren, is expected to make a full recovery."

Our team took up a collection to pay for the veterinarian bills. As a result of our kindhearted and generous coworkers, the horse, now called Ameren, is expected to make a full recovery. pic.twitter.com/UpEBOgweJK