Leading with her activist roots, Missouri Representative Cori Bush began a chant on the steps of the Old Courthouse.

“When reproductive freedom is under attack, what do we do?” Bush asked the crowd.

“Stand up, fight back!” the crowd chorused back to her.

More than 100 people gathered on the steps and around the Old Courthouse on September 9 to listen to Bush, St. Louis Mayor Tishaura Jones and other local leaders speak out against the six-week abortion ban in Texas and the copycat laws that are sure to follow.

The Texas ban became the law of that state on September 1, the result of a 5-4 U.S. Supreme Court decision that declined to block the law while opponents mount a legal challenge. Abortion rights groups have sounded the alarm about the Texas ban, not only for its six-week deadline effectively banning abortion before most people know they are pregnant, but also for allowing citizens to sue anyone who helps someone obtain an abortion, an aspect of the law that opponents view as an “abortion bounty."

Since the law passed, St. Louis-area clinics have taken action, preparing for an influx of patients from Texas. The organizations are also preparing for the possibility that Missouri’s Eighth Circuit Court of Appeals upholds the eight-week abortion ban Missouri passed in 2019. The leaders made sure their point was abundantly clear to the crowd: they would not let reproductive freedom be taken away without a fight.

Reproductive Health Services of Planned Parenthood’s St. Louis Region President and CEO Yamelsie Rodríguez was one of the speakers at Thursday's rally. She made sure to note that just because it was Texas’ abortion ban doesn’t mean this won’t affect Missouri.

“Let me be crystal clear, this is not just a Texas problem, it’s everybody’s problem,” Rodríguez told the crowd. “We don’t have to guess what a post-Roe world looks like. That day has already arrived if you’re a patient with a low income, if you live in one of the 90 percent of counties without an abortion provider, and now, almost certainly, if you are a patient who lives in Texas. Now is the time to get loud.”

The rally drew a diverse group of attendees. Many held pink and purple signs that advocated to protect reproductive rights. There were mothers and their children, men and women, a protestor dressed up in a red cloak as a nod to the show The Handmaid's Tale, and college students. The protest chants were backed up by cars honking along in solidarity as they drove past.

Ashton Otte felt attending the rally was the best way to show her support for the fight against abortion bans. She said showing up and putting public pressure on legislators is the most important thing you can do besides vote.

"So much of this legislation and decision making about people's bodies happens in offices behind closed doors," Otte says. "So to show up in person in large numbers, it really shows that we are real people being affected by these completely deranged bills and we won't stay silent about it."

There were about five anti-abortion protesters who largely remained silent, but began shouting at speaker Cora Faith Walker. One man joined the pro-lifers early on, carrying two baby dolls and shouting “Black babies matter” throughout the speeches. He left shortly after the speeches began when crowd members had told him to quiet down. 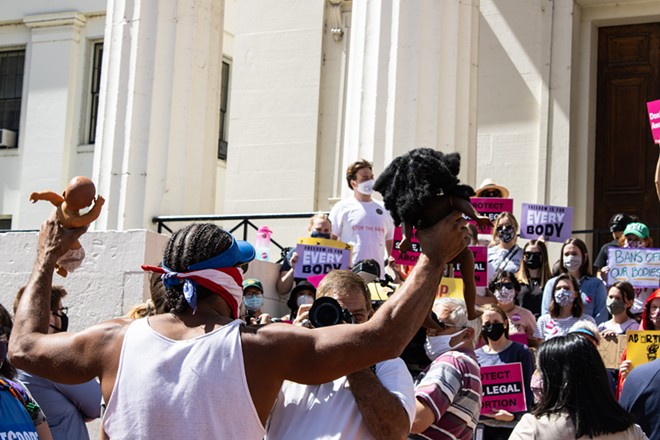 The speakers chose to ignore the interruptions, instead powering through with their remarks on moving against the abortion bans and sharing their personal abortion stories.

Rodríguez said Planned Parenthood has never backed down from a fight before, and they weren’t going to now. Jones and Bush also promised to do everything in their power to fight against the abortion bans.

Jones said St. Louis “will not idly sit by” as Texans come to the area for care and “our city continues to face attacks from Jefferson City politicians who think they know better than we do about how to raise our families and make our own healthcare decisions.”

Bush told the crowd she would continue to fight on the national level, pledging her support to the cause. She even shared her own abortion story, something she said she had never told anyone until that moment.

The congresswoman then called on her colleagues to help her end the filibuster, pass legislation that would guarantee a woman’s right to choose in the event Roe v. Wade was overturned and expand the Supreme Court to “restore ideological balance.”

The rally ended the way it began; another chant was started, this time by Walker. “We are unstoppable, another world is possible” could be heard down the street as the crowd dispersed, still carrying their pink and purple signs.