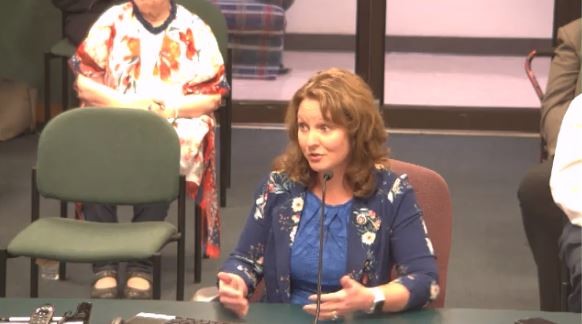 Definitely, Maybe: It’s not surprising that the Missouri legislature would entertain the deranged election conspiracies of how the 2020 election was stolen, but the degree of dumb reached during an August 24 meeting of the Missouri House Elections Committee pushed the needle from parody to farce to just a line of facepalm emojis. The hearing featured “testimony” from Republican Rep. Ann Kelley on what she’d learned at the Cyber Symposium hosted by deranged pillow magnate Mike Lindell, who had spent months promising damning evidence proving that hackers changed the 2020 votes and robbed America of a second Trump term — and of course, no evidence was provided. That meant Kelley and her Republican colleagues had to work twice as hard to make the nonsense sound reasonable, while also distancing themselves from the radioactive insanity of Mike Lindell... which is a tough sell when, again, you’re getting info from “experts” who fundamentally do not understand how elections work. The solution, for Kelley, was to hedge every statement with self-contradiction. “I think it's very evident that there could be a problem,” she argued in one of many moments of incoherence. Later, under questioning by a Democratic committee member who asked for the identity and credentials of one of those “experts,” Kelley lashed out, “What does it matter? What does it matter?” At least, in that moment, she was finally being honest.

Missouri’s L's: Just when we thought Missouri could stop apologizing for Rush Limbaugh, we’re reminded of Dana Loesch. The ex-St. Louis blogger was featured in a, let’s say “generous” Washington Post profile, set in her ridiculous Texas home where she, like Limbaugh did in Florida, goes full elitist while posing as a voice for the average American. (If you read the story, you might spy the line, with accompanying photo, about her taking up smoking a tobacco pipe and be tempted to wonder if that qualifies her as a hipster soyboy.) We suppose it’s fitting that she’s now being eyed as the successor to Limbaugh’s talk radio time slot. They both discovered the riches in twisting facts to stoke America’s worst impulses. And, sure, it’s nice knowing she’s not actually beaming her anti-mask, vaccine-skeptical, anti-critical race theory diatribes from here these days, but maybe the universe could shift the focus to some non-Missouri clowns for a while?

Wasted Time: In a world where dating apps have become the bane of most people’s existence, where love seem like it will forever be unattainable, we have to wonder: How the fuck did we not think of making our own dating website where we are the sole profile? St. Louis resident Colin O’Brien’s pure genius of crafting a site wherein women can only apply to date him — DateColinOBrien.com, naturally — is the reason we may once again believe in love. This innovation begs the question: Where the fuck was this all our lives? We could’ve spent our nights doing something else besides swiping through an app for hours, losing our last hopes for a meaningful relationship in modern society? O’Brien has accumulated over 150 invites for dates, all with women seriously interested in him, without having to wade through the jungle of Tinder to do it. The back-and-forth that comes with the woes of dating apps, the potential ghosting, the “so, can I have your actual number instead of using this app to contact you?” question — all of those obstacles, gone. Honestly, it’s not O’Brien we have beef with on this one. We’re big mad at ourselves.

Schrödinger's Virus: In today’s right-wing political landscape, intellectual incoherence and bald-faced hypocrisy are the stuff winning campaigns are made of, as Missouri Attorney General and Senate hopeful Eric Schmitt is acutely aware. How else would you explain his recent decision to file lawsuits against school districts that implement masking rules while simultaneously going forward with his totally-not-a-stunt suit against the Chinese government over the spread of the disease? Back in April 2020, when the battle lines of the COVID culture war weren’t yet clearly defined, Schmitt insisted that “The Chinese government lied to the world about the danger and contagious nature of COVID-19... and did little to stop the spread of the disease,” demanding the nation be held accountable for its actions. Fast-forward to last week, Schmitt’s latest base-pandering suit downplays the danger and contagious nature of COVID-19 while actively seeking to remove one of the best tools we have to stop its spread. Shouldn’t he be demanding accountability for these actions, too? Maybe we’ll get lucky and he’ll sue himself.