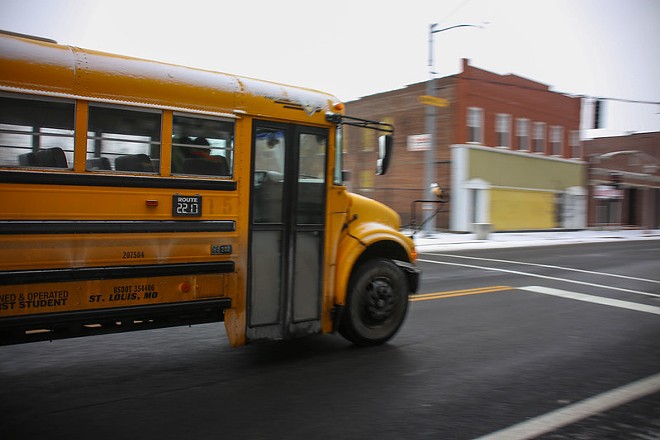 Ten hours of training in diversity, equity and inclusion remained a sticking point between Hazelwood School District and three local police departments as students returned to the classroom this week. The district added the training requirement to a long-standing contract, and now the police departments have refused to provide school resource officers for the 2021-2022 school year.

The officers — normally provided by the Hazelwood, Florissant and St. Louis County police departments — won’t be returning for at least the beginning of the school year, something parents say the district and department will come to regret.

Hazelwood School District parent Lynda Pearson, who had five kids attend schools in the district, says there were fights almost daily at the high school when her daughter, a 2020 grad, went there. She thinks the district "100 percent needs" the resource officers.

“The school is not unreasonable requiring additional training for the SROs,” Pearson tells the RFT.

Serving more than 17,000 students as of the 2019-2020 school year, the Hazelwood School District is one of the most diverse in the state. The mother says she would like to know why the department would refuse the training.

In a letter obtained by KSDK, chiefs of the three police departments — Gregg Hall, Tim Fagan and the now-retired Mary Barton — write that they “believe our officers receive training that is more than adequate and addresses the critical matters of diversity, equity, and inclusion.”

The chiefs explained the officers must obtain 24 hours of "continuing education" that achieves Peace Officer Standards and Training requirements yearly. A spokesperson for the St. Louis County Police Department said Hazelwood School District's training does not meet the POST standards.

"The St. Louis County Police Department is committed to training relative to diversity, equity and inclusion. Our officers will continue to receive specific and developed training in these critical areas that is Missouri P.O.S.T. approved," the spokesperson wrote in an email to the RFT. "Unfortunately, Hazelwood School District’s required training does not meet that criteria. We recognize the value of the School Resource Officer Program and hope to maintain a positive and productive relationship with the Hazelwood School District in order to get our officers back in their schools in the future.”

The implicit bias and de-escalation training requirement was just added this year.

Interpersonal perspective classes can range from understanding hostage incidents and using social media to help investigations to ethics or inclusivity training, according to the website of one of Missouri’s POST providers, Police One Academy.

However, Hazelwood School District sought a more targeted approach. A statement from the school says the training would’ve been based off the “extensive work” done by the district since it issued a statement of solidarity after George Floyd was killed. The statement promises engagement on diversity and inclusion practices and to reduce the disparities in student discipline.

“The training would have helped SROs better serve the social and emotional development of our students,” the statement from the school board members reads. “Additionally, much of the training mirrors professional development activities that HSD faculty and staff participate in year round.”

The training requested would’ve covered topics including language sensitivity and communication with diverse student populations, trauma-informed practices and Hazelwood School District children, a district and school resource officer partnership to combat the school-to-prison pipeline, the adultification of African American children and the role of the School Resource Officer in partnership with school safety officers and school hall monitors.

Pearson agreed with the district’s goals of better serving the students.

“The school district knows better than the police department the needs of students,” she says. “If they have identified or have concerns or are just being proactive regarding police as SRO’s interaction with students, we should trust and support their judgment. The police department is absolutely wrong to refuse additional training.”

Contacted by the RFT, a district spokesperson declined to say anything beyond the statement. The union representing Hazelwood teachers did not respond to multiple messages.

The RFT also reached out to the police departments for comment. The police chiefs of Florissant and Hazelwood replied with iterations of the same statement: They value the long-standing partnership they have with Hazelwood School District but haven’t been able to reach an agreement on a new contract.

“We continue to welcome any dialogue that would allow our department to re-establish this program as soon as possible,” Hall, who oversees the Hazelwood Police Department, added.

The school district's board members said in their statement while the officers will not be in the schools at the start of the school year, their relationship with local law enforcement will continue, as well as the “never-ending respect” for the role the police play in their community.

Note: This article has been updated with further comment from the St. Louis County Police Department.