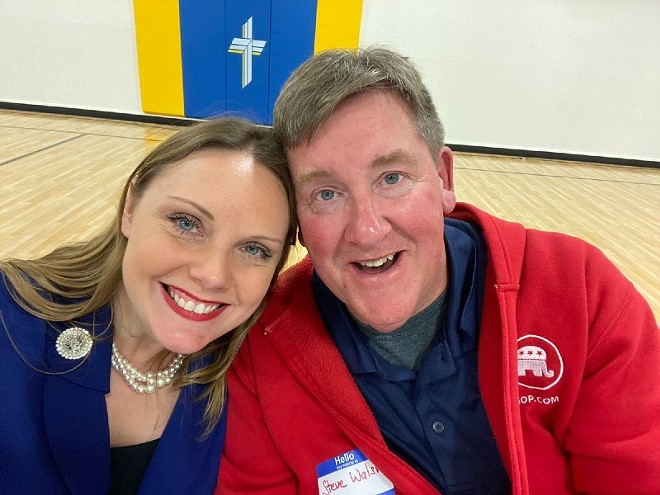 Sara Walsh delivered the news this morning on Twitter.

"It saddens my heart to share that this morning my best friend and beloved husband Steve Walsh was welcomed to Heaven’s glory into the arms of Jesus Christ his Lord and Savior," Sara Walsh of Ashland wrote.

It saddens my heart to share that this morning my best friend and beloved husband Steve Walsh was welcomed to Heaven’s glory into the arms of Jesus Christ his Lord and Savior. Arrangements pending. Thank you to everyone who has lifted us up in prayer. ❤️ pic.twitter.com/135IWfgC7s


The couple both contracted COVID-19, and Sara Walsh told KCRG in early August that she and her husband had chosen not to receive the vaccine because it had not been approved by Food and Drug Administration. She also said she knew people who'd had bad reactions to it.

The vaccines have received emergency use authorization, and the FDA and health experts have urged everyone who is eligible to get the shot while the long approval process continues. Nearly 200 million Americans have received at least one dose. The FDA announced on Wednesday that it was prepared to begin offering booster shots to the fully vaccinated, starting September 20.

Missouri remains one of the hardest-hit states in the country as the delta variant surges. Health officials continue to try to persuade reluctant residents to get the vaccine, noting that nearly all of those who are dying or forced to be hospitalized are unvaccinated. Even so, it's been a hard sell here. On August 2, the day before Sara Walsh first announced her husband was on a ventilator with COVID-19, six Republican legislators called on Governor Mike Parson to convene a special session of the General Assembly in hopes of blocking businesses from mandating vaccines for employees.

Following Sara Walsh's announcement this morning, messages of condolences poured in on Twitter from politicians as well as journalists who knew Steve Walsh from his time as a journalist and through his job as Hartzler's communications director.

"I'm so sorry to hear this devastating news," wrote Missouri House Speaker Rob Vescovo. Prayers for you and your wonderful husband Steve. May true arms be around in your time of need."

Missouri Lieutenant Governor Mike Kehoe wrote, "Steve Walsh was a true professional, an incredibly kind man of strong faith, and he was our friend."

Steve Walsh was a true professional, an incredibly kind man of strong faith, and he was our friend. @ClaudiaLKehoe & I extend our heartfelt condolences to @SaraForMissouri. She is hurting. We are hurting. We will miss him greatly, but knowing he is in Heaven provides us comfort.

Also this morning, as he faced a crowd of hundreds at the outdoor Governor's Ham Breakfast at the Missouri State Fair, Governor Mike Parson paused the event's programming to inform attendees of Steve Walsh's passing from COVID-19.

Parson asked for a moment of silence. "I would ask all of you to put your thoughts and prayers with Sara and her family," he said.

.@GovParsonMO asks the hundreds of those attending for the Governor’s Ham Breakfast at @MoStateFair for a moment of silence and to keep @SaraForMissouri and her family in their prayers after Sara’s husband Steve died of #COVID early this morning. #moleg #mogov pic.twitter.com/AmzxLB08Mg