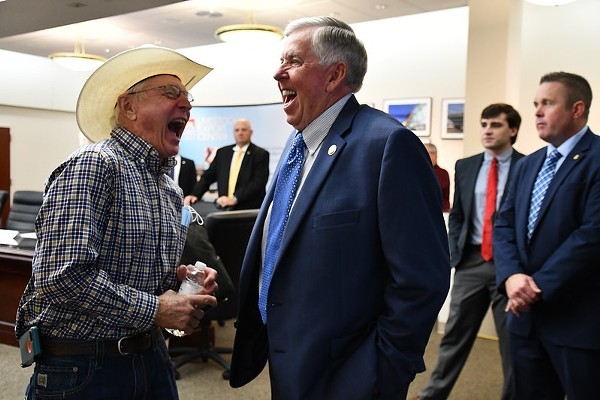 Pardon Me?: Evidently it's not enough that Mark McCloskey and his wife were pardoned by the governor for crimes they freely admitted to committing, as St. Louis' most gun-surrendering lawyers are now suing the state (and Kim Gardner for good measure, despite the fact she did not negotiate the plea agreement) in a bid to get those same guns back. As reported by the St. Louis Post-Dispatch, McCloskey, who has stated clearly that he would do those crimes again, filed a civil suit this week in the hopes the state will re-arm him so that he has the ability to do so. Never mind the fact that the couple consented in their plea agreement to the destruction of the guns, and never mind the fact the special prosecutor who handled the case says that nothing about the governor's pardon entitles them to get them back — the Senate hopeful has potential voters to woo, and willfully handing over his firearms to the government isn't gonna get him far with that crowd. As with everything about McCloskey's vainglorious run for public office, the whole thing is nothing more than a culture-war-stoking stunt, only unlike the exhausting missives about “cancel culture” and other nonexistent threats he spends all day tweeting, this one is set to waste taxpayer money. Can these people just fuck back off to their mansion already?

Fairly Terrible: The Missouri State Fair is usually a good place to get a lemonade, but this year it also might be a good place to get some corona. More than 300,000 people are expected to attend the fair in Sedalia, and heaven knows COVID loves a large group of unsuspecting people. Last year, many of the fair’s events were canceled, including concerts, the carnival and just about anything that would pull people close to each other. This year, events are back to “normal,” which means people might actually be risking their lives to see the Beach Boys without Brian Wilson. Missouri is one of the nation’s COVID hot spots with deaths increasing 91 percent over the past two weeks. There will be some pandemic safety options, but they aren’t required. For example, they’ll offer, but not require masks. They’ll even give you a vaccine on the site, but vaccines aren’t required. And there are some other questionable elements, such as hosting an indoor area for seniors. Yikes. If grandma can’t handle the heat, maybe leave her at home this year? Nobody expects this backward state to turn around overnight, but it hurts to watch such a bad idea unfold in slow motion. And with people coming in from all across the state, it looks like Missouri could stay a hot spot for months to come.

Didn’t Learn A Damn Thing: We know we've already been Big Mad about the St. Louis County Council’s July 27 meeting and how most attendees there seemed to have more than just a few screws loose. But somehow, last week was even worse. With no responsible people left (everyone who went the previous week was asked to quarantine after an attendee tested positive for the virus), the public forum seemed to be strictly anti-maskers raging on about the vaccine and masks. Even though the county health department hasn’t proposed vaccine mandates, Councilman Ernie Trakas declared he would vote against one, setting up the straw man for audience members to attack. The first speaker called the COVID-19 vaccine a bioweapon, and the meeting only deteriorated. Another speaker — after giving an impassioned, conspiracy theory-filled speech — coached her toddler to chastise council members with the words, “I decide what to do with my body.” The speech came as twenty kids were in the ICUs of metro-area hospitals. But, yeah, don’t wear a mask or bother trying to help your kid. Why not let him lick the podium? The next speaker hoped for “the filth of tyranny to spread" over the families of any council members who voted for a mask mandate. We mean this is the kindest way possible: What the actual fuck is wrong with these people?

Weird Flex, But OK: Missouri Governor Mike Parson has been flashing that corny-ass smile all over the state and shaking hands with thousands on his bicentennial tour. But worry not, our fellow Missourians! COVID-19 patients can be transported by the speediest of ambulances to hospitals. Is your hospital overrun with COVID-19 cases? Rest assured, Parson informed Missourians via the Twittersphere that our dutiful EMTs can work even longer hours to transport you to a different hospital. The tweet left many wondering, “Why is he proud of this?” and “Why not implement a mask mandate instead of overworking first responders?” That, dear reader, is something we’ve been scratching our heads about since the first days of the pandemic. Parson has refused to implement minimal precautions; insisted against all evidence that anti-mask, anti-vax residents will take “personal responsibility” for protecting their neighbors and fought attempts by local health departments to clean up his mess.