The Men's Marathon at the 1904 Olympics in St. Louis Was an Epic Sh*tshow 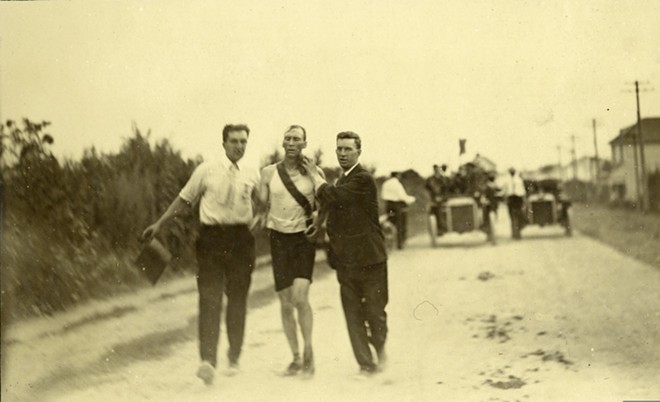 Amanda Clark has a handful of party stories she always goes to — but not the typical ones that involve embarrassing moments or her own personal wins. These stories take place long before Clark was born — the stories are from the 1904 St. Louis Olympics.

Clark, a community tours manager for the Missouri History museum, knows her way around St. Louis history. Before landing at the museum, she had her own company, a bus and walking tour that took guests around St. Louis. Now, she does the same thing for the history museum.

She says this year’s Olympics have similar qualities to when St. Louis hosted nearly 120 years ago.

SEE ALSO: The 1904 St. Louis Olympics Were Memorable For A Variety Of Reasons [PHOTOS]

“There weren’t a lot of people, there was a major war being fought between Russia and Japan, which made it kind of hard to travel.” Clark said. “The fact that they take places in times of upheaval, it seems to have an air of absurdity to it, they’re insisting on having these games, and the fact that they can’t have spectators, it kind of matches the legacy of the 1904 Olympics.”

She also said it was expensive to travel, resulting in only 62 of the 651 athletes competing in the games being from other countries. The 1904 Olympics took place for only a few days — from August 29 to September 3, but athletic events with the ongoing World’s Fair hosted athletes from July until November. The World’s Fair organizers are actually the reason the Olympics were held in St. Louis in the first place, Clark said. Originally meant to be held in Chicago, organizers “strong armed” the city’s organizers into moving the games to coincide with the fair, Clark explained.

“They went to Chicago and basically said ‘Listen, our event is going to be way better than anything you’re doing, so you might as well just let us do it,” Clark said.

Thus, St. Louis hosted the first Olympic Games outside of Europe. But, the games didn’t exactly go off without a hitch.

The men’s marathon is probably the best example of crazy stories out of 1904. Hosted with athletes ranging from professionally trained to completely untrained, the marathon was held on August 30 and the temperature was in the 90s. No rain had been spotted for several days. Not only had it not rained, the race was held largely on dusty roads that contributed to participants quitting the race.

“One man had to quit because his lungs became coated with dust,” Clark added.

Not only did the dust serve as an issue, one of the organizers for the event wanted to conduct an experiment on dehydration, so he made it to where racers would only have two stations they could drink from.

The winner of the race, Thomas Hicks, had one of the most difficult journeys of the marathon, Clark said.

Toward the end of the race, Hicks became increasingly more tired and his trainers had to get out of the car they followed him in to run alongside him. The trainers gave Hicks small amounts of strychnine, a common rat poison and stimulant, a first for the games. Years later, it would become illegal to compete in the games with the help of drugs.

The trainers didn’t stop at strychnine, though. With ten miles left in the race, Hicks began hallucinating that he had twenty more miles to go, so they combined brandy with raw egg whites and Hicks drank it.

“When he finally gets to the finish line, his trainers were holding him up by the shoulders,” Clark said. “And he’s just moving his legs, his feet aren’t even touching the ground.” 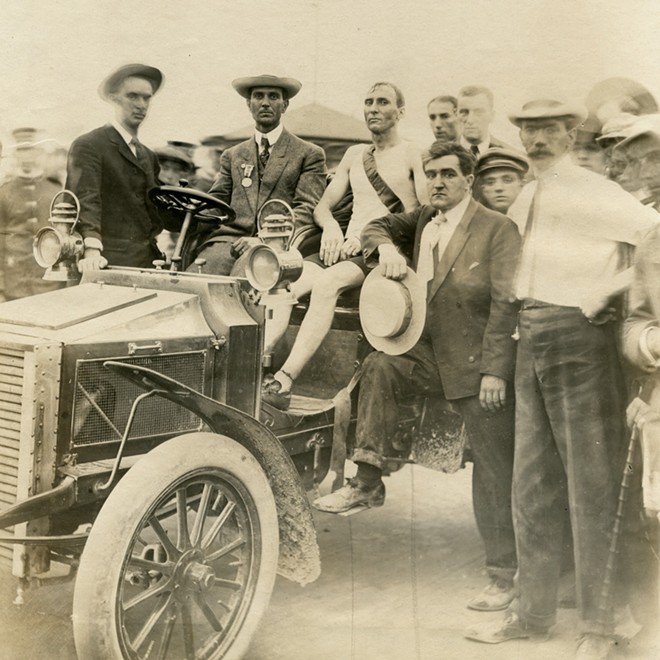 Wild dogs chased a different runner a mile off course. One man quit the race nine miles in, rode a car back and crossed the finish line on foot where officials mistakenly declared him the winner. He had his photo taken with Theodore Roosevelt’s daughter and other celebratory matters ensued until someone called him out about driving across the finish line just as he was about to be awarded. The man claimed he tried to pull a practical joke.

Perhaps Clark’s favorite story is that of Felix Carvajal. Carvajal came to the United States from Cuba and had to fundraise in order to be able to compete. He accomplished his fundraising goal, but his journey to St. Louis took him through New Orleans. The runner quickly gambled his money away and had to hitchhike and walk to St. Louis, Clark says. Carvajal arrives to the starting line in a long sleeve shirt, dark pants, a beret and street shoes.

“Another runner took pity on him and found a pair of scissors and cut his pants into shorts,” Clark laughed.

After the race begins, Carvajal stops at one point to have a chat with the crowd. He’s talking to spectators and then he finds a car filled with people eating peaches. He asks for one, they tell him no and he “playfully steals the peaches” and runs off, Clark said. But that’s not all the shenanigans Carvajal ends up in — he found an apple orchard where he treated himself to some of the fruit. The apples turned out to be rotten. So, he just laid down and took a nap.

He placed fourth in the marathon.

Clark said the stories of the St. Louis Olympics don’t end with the marathon. There could easily be a tour around St. Louis regarding the Olympic games, she added.

As far as St. Louis ever hosting the Olympics again, Clark said she doesn’t think so.