Eviction Moratorium Ends, But the Fight Continues in St. Louis 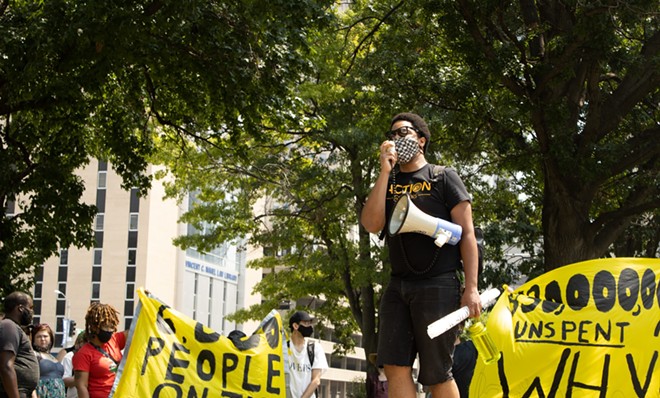 Congresswoman Cori Bush (D-St. Louis) slept on the steps of the U.S. Capitol building over the weekend. Monday afternoon, activists took to the streets downtown in St. Louis.

Both sought the same goal: a solution for those who face eviction with the end on July 31 of a federal eviction moratorium that has helped keep people in their homes during the pandemic. Bush had aimed to recruit her colleagues who were on vacation to come back to Washington, D.C. so they could vote to extend the moratorium.

A number of progressives in Congress supported Bush’s mission, but a last-minute push for an extension failed on Friday, and Democrats and the White House were still bickering on Monday about who was to blame. Activists back home in St. Louis applauded Bush for her efforts, but remained adamant that other elected officials have not done enough.

Chants of “Hey hey, ho ho, evictions have got to go” and “no money, no peace,” could be heard as the protesters settled onto the steps to discuss what the end of the moratorium means to those in danger of being forced out of their homes.

“There are millions of dollars sitting around,” Kennard Williams, one of the organizers, said to the crowd. “People are playing games with people’s lives, with other families’ lives. They think it’s a joke.”

Williams was referring to the $168 million federal relief funds tied up in city politics. In a bill that was passed by the Board of Aldermen but has stalled in a stalemate between Mayor Tishaura Jones and Board of Aldermen President Lewis Reed, more than $43.8 million was designated to go to the city Department of Human Services. The money could help the unhoused, gives housing and rental assistance to residents and has targeted cash assistance for those who meet certain thresholds.

Williams also expressed frustration, again, with elected officials and how they have reacted to calls for assistance for people who are unhoused and those facing eviction. He played clips at the protest of different aldermen speaking at aldermen meetings, sounding unconcerned about housing relief efforts. Williams said for the aldermen to say the "sky's not falling” is unacceptable.

Williams also took issue with plans for other portions of the money allocated in the federal relief plan, namely the $5 million designated for police overtime, offsetting $4 million the Board of Aldermen had removed from the police department’s budget when aldermen approved the city’s yearly budget.

"It’s issues like that money is being used to go to the police. There was such a fight for this money to be used to keep people in their homes and food on the table," Williams says. "But, they easily found money to allocate toward police and that’s unacceptable."

In a statement on Sunday, Mayor Tishaura Jones said she, too, was disappointed by the federal government not extending the moratorium. She pointed to the $2.7 million allocated from city funds that she released to help fight COVID-19 on Thursday.

Of that $2.7 million, Jones set aside $1.5 million to aid residents with rental and housing assistance. There are currently 3,000 pending eviction cases in the city, according to Jones’ office.

“Keeping families in their homes will help us fight COVID-19,” Jones said in her statement. “My administration continues to explore every option to address this crisis. I have been ringing the alarm about this crisis since June while federal relief funds have been tied up in political games.”

Another press release from Jones’ office said the city would issue “direct payments” to tenants and expedite applications for assistance. The release noted federal rules used to require rental and utility assistance to go directly to landlords or utility companies.

However, there are now updated U.S. Treasury guidelines that note “the unwillingness of some landlords to participate in the program, and now allow funds to go directly to tenants,” per the press release. 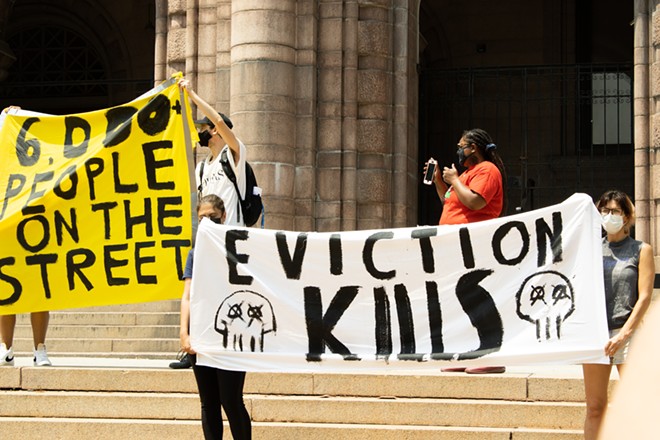 After organizers spoke, protesters followed them into City Hall. The first stop was the mayor’s office, where protestors sought to speak with Jones about demands for at-risk residents and the unhoused. Jones did not speak with them, but members of her staff did.

Spokesperson Nick Dunne said the administration is “reviewing those demands and hope to have a response and a follow-up with them as soon as possible.”

Protesters then visited Reed’s office and left their demands since he was not there. The RFT reached out to Reed for comment but did not hear back by time of publication. The protesters also left demands outside the 22nd Judicial Circuit Court building, where eviction proceedings are expected to resume now that the federal moratorium and a corresponding local moratorium have expired.

When the protest was finished, Williams said the next steps for organizers involve work with tenants and people across the city. He said this means talking and managing expectations with those in need of help.

Williams called on the mayor and Board of Aldermen to help at-risk tenants. He said the mayor and aldermen should do everything they can to meet the demands laid out by the collective. The demands, listed on Facebook, are to: “End the delay and process the backlog of rental assistance applications that the Department of Human Services has been sitting on and direct the assistance to tenants immediately," and for "transparency on how long it is taking tenants to receive rental assistance and updates throughout the process from application to payout."

There are also demands to "stop the unhoused encampment sweeps and rescind the order to allow the Intercontinental Plaza encampment to be cleared; and provide immediate housing solutions for people being evicted." There is a separate list of demands for the court system.

“I absolutely believe the mayor and the Board of Aldermen can use their power to meet all of those demands, as they should,” Williams said. “Because the demand is great and the time is short.”