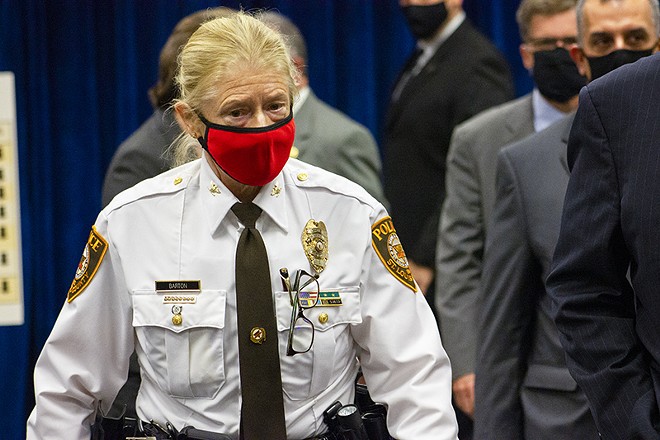 After just fifteen months on the job, St. Louis County police chief Mary Barton is retiring, multiple news outlets reported Friday morning. Barton's exit comes after a rocky tenure in which the department wrestled with allegations of racism — and with Barton herself accusing the department of discrimination.

Citing unnamed sources familiar with the situation, the St. Louis Post-Dispatch reports that Barton filed a formal complaint with the U.S. Equal Employment Opportunity Commission last week. While the specifics of her complaint aren't known, submitting such a document is the first step in the process of filing a formal lawsuit alleging employment discrimination.

But it appears that the matter won't go that far. Instead, Barton and the county Board of Police Commissioners arrived at a $290,000 settlement. She will step down at some point after taking a leave of absence on Sunday.

Barton's removal has been months in the making, with the chief being the subject of the board's criticism first in January and then in June, according to a copy of the settlement obtained by the Post-Dispatch.

Appointed in May 2020 as the department's first female police chief, Barton entered the role of chief with more than 40 years of experience on the force. She stumbled through a series of controversies, including denying the existence of systemic racism in the department and, later, the release of an audio recording featuring Barton's brother-in-law, a 911 dispatcher with the county, using the n-word on a police radio.

In April, Barton was subsequently the subject of two symbolic "no confidence" votes in the St. Louis County Council and the Ethical Society of Police.

Updated 1 p.m.: In a statement included in a county police press release announcing the retirement, Barton said it had been a "privilege to serve" as chief and that she "could not be prouder of the men and women of this Department."

Barton's statement continued: "Our community members should know the officers of the St. Louis County Police Department will continue to serve our residents in the most professional way, positively impacting lives through their genuine commitment to public service."