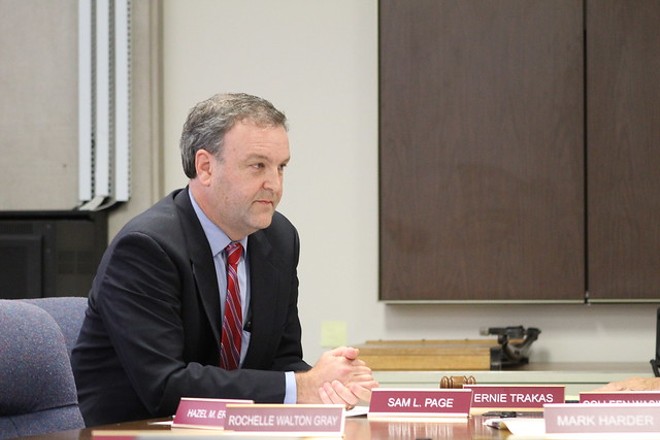 St. Louis County Executive Sam Page said at a press conference this morning the mask mandate that began Monday is still in place despite the county council's vote Tuesday night to rescind it.

Page argues that the order does not restrict businesses and therefore does not trigger a newly passed state law that limits the ability of local health departments to issue public health orders. But that's an issue that will likely be worked out by the courts, he added.

Even before Tuesday night's 5-2 county council vote against the mandate, state Attorney General Eric Schmitt attacked the order. He filed a lawsuit on Monday, claiming twin mandates implemented in the county and city are illegal.

Until the lawsuit is resolved, Page said, the new health order — which says everyone five and older, with few exceptions, must mask up in indoor public spaces — will stay in place.

That's sure to anger those who crowded into Tuesday's council meeting to fight the new mandate.

Signs reading “Stop the Tyranny,” “My Body, My Choice,” and “We Will Not Comply” popped up throughout the mostly maskless crowd. Councilman Tim Fitch, R-3rd District, led the charge to rescind the public health order.

“Sam Page and his supporters have done their best to make this discussion about masks versus no masks, they want to divide us,” Fitch said at the meeting. “Before we have that discussion, we have to settle his blatant violation of state law by issuing this so-called mask mandate.”

Councilwoman Lisa Clancy, D-5th District, voted against rescinding the order. She released a statement today agreeing with Page. She said based on what she has heard from legal experts, she does not believe the council’s vote last night has the intended effect of actually rescinding the public health order.

“It will, however, confuse the people and businesses of St. Louis County,” Clancy said in a press release. “As Dr. Khan said during his testimony last night, it will also cause more misery and more death.”

Dr. Faisal Khan, director for the St. Louis County Department of Public Health, attended the meeting to answer council questions about the mandate. He pleaded with the council to keep the mandate in place and said the decision was based on rising COVID-19 cases.

Khan said it was his duty to inform the council the delta variant is “poised to cause more misery, more death, more disease, an increase in hospitalizations and inflict further damage on the population in the St. Louis region.”

“I ask you, I plead with you to set aside your umbrage over process issues and permission sequences and listen to public health, and please stand by this order,” Khan added.

Khan's pleas were met with disinterest by most of the council and jeers from the crowd. Most council members critiqued the way the order was issued rather than the mandate itself. Clancy, in her release, said because of this nuance, she will introduce a mask order at the next council meeting which is scheduled for August 3. Fitch told the St. Louis Post-Dispatch he'd be "all ears" about a mask mandate if Page and Khan brought it to the council first.

Councilwoman Shalonda Webb said in a press release before the meeting that she takes "issue with the County Executive bypassing the St. Louis County Council and unilaterally making decisions for the people I represent with any official that doesn’t represent them." Webb said she supports masks, but that the real problem is not enough people getting vaccinated. She added she does not approve of a mandate at this time.

Councilwoman and chair Rita Heard Days, D-1st District, expressed frustration to Khan about previously following restrictions and still ending up in a “predicament.” She questioned Khan on what they did wrong. Khan replied that we didn’t tell the virus how to behave.

To accommodate the crowd, Days extended the public comment session from one hour to two hours and more than 40 people got up to speak. In contrast to the council opposing the legality of the order, many commentators opposed the mask itself. The commentators pointed to their small businesses or “civil rights” as the reason for their lack of support. Others took aim at Page in their three-minute time slots, calling him a dictator or tyrant. A select few spouted conspiracy theories about the vaccine and COVID-19 itself.

A very small minority in the crowd, including two pastors and state Representative Michael Burton, supported the mandate. Alonzo Adams Jr., a pastor, gave an impassioned speech, revealing that he had lost family members and friends to COVID-19 as he called on the council to keep the mandate in place.

“We are dying, we are sick. So, I would like something to be done about it,” Adams said. “I’m hoping a lot of people know that if your mask doesn’t work for you, that’s fine, but a lot of people are dying because you choose or choose not to, and that’s your choice.”

Page said he expects the public health order to prevail in court, like other challenges to mandates before it.