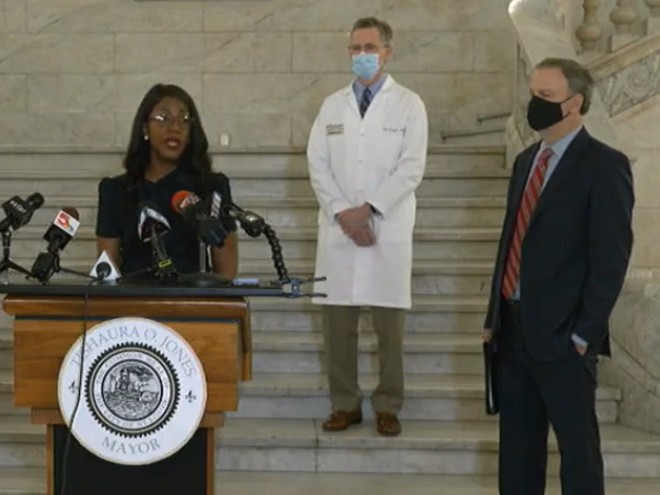 St. Louis Mayor Tishaura Jones and St. Louis County Executive Sam Page on Monday pleaded with residents to mask up again. The two hosted a press conference at City Hall to answer questions about the reinstated mask mandate for the city and county. Both said the need for the mandate was due to an increase in COVID-19 positivity rates, largely due to the delta variant spreading like wildfire through Missouri.

Jones said the city has seen an uptick in vaccination rates as outreach programs have extended to churches, salons and other community-based organizations, but it isn’t enough yet. Moving forward, Jones and Page said the focus will continue to be on vaccination efforts. While the city and county work toward vaccinating more people, the two explained masks will have to return until vaccination rates rise.

“Masks help stop the spread of disease. We came together once to protect each other,” Jones said at the conference. “And I’m confident we can do so again.”

Page said on June 1, the number of positive cases in St. Louis County was 40 per day. As of Saturday, the number of cases was at 218 a day. He said that while masks have become a symbol of political divide, some might say masks put the virus in the “slow lane” and gives health officials more time to vaccinate more people.

Dr. Clay Dunagan, acting head of the St. Louis Metropolitan Pandemic Task Force, said that while the Centers for Disease Control and Prevention hasn’t reinstated a mask mandate, the organization has to issue guidance for a whole country. He explained from a disease perspective, decisions about what to do locally depend a lot on the case rates in the your region.

"So, for St. Louis, I don’t see anything that they could say that would change us from the course that we’re on right now," he added.

Both Page and Jones acknowledged the pushback the city and county have gotten from elected officials, including Attorney General Eric Schmitt and St. Louis County councilman Tim Fitch. Schmitt tweeted on Friday he would be filing a lawsuit against the city and county’s mask mandate to “stop this insanity.”

Fitch, also on Friday, tweeted the council “can act as soon as Tuesday to terminate the County Executive's new health mandate,” and then retweeted Schmitt. Fitch answered press questions after Jones and Page had left, insisting Page did not have the legal authority to implement a mask mandate.

“The conversation we’re having on the council is not if you should wear [masks] or not; it’s does the county executive have the authority or his public health director to issue these mandates,” Fitch said.

He cited the bill Parson signed on June 15 limiting public health orders as the reason Page does not have the authority.

Under that bill, local health orders aimed at curbing the spread of a contagious disease during a state of emergency — Missouri is under one until August 31 — are limited to 30 days in a 180-day period. Extensions for another 30 days can be approved by a simple majority vote of the local health authority’s governing body after a report is provided outlining the need for such an extension. The governing body can terminate the health order at any time.

Page and Jones criticized Schmitt's lawsuit. The mayor said it was "easy to grandstand when your biggest concern is filming your next campaign commercial and chasing clout." She added that she doesn't believe the lawsuit will succeed.

“I wish that he would put more attention towards serving the people of the state of Missouri instead and holding our health and safety paramount, instead of filing frivolous lawsuits that waste taxpayer dollars,” Jones said.

There isn’t an exact benchmark on what St. Louisans must do in order to get the mandate lifted once more, Page said. In May, the target was 100 cases a day, and Page called that a “reasonable goal” moving forward. The county will continue to monitor case rates, hospital capacity and what variants of COVID-19 arise. Page said the county will continue to make decisions based off the advice of medical experts.

“Unless we do something to put a barrier between the infected and the uninfected, we’re going to see that rate escalate,” Dunagan said.