When Grant Palmer turned sixteen years old, he was given the choice of getting his first car or his first go-kart. Having already raced for two years out of what is now World Wide Technology Raceway in Madison, Illinois, he went with the obvious choice at the time — the go-kart.

"There's some days my parents probably wish I chose the car, but they're supportive of me," the St. Charles resident says.

He credits this support, in part, to his dad's experiences drag racing in the '90s and his mom's obsession with NASCAR driver Tony Stewart. Now twenty years old, Palmer has won a SCCA Super Tour FX class championship, and he recently competed in the 2020 British Racing and Sports Car Club FF1600 championship for Low Dempsey Racing.

The next step in his career, he says, is the Road to Indy.

"Right now, I'm in USF2000," Palmer explains. "And we're considered to be on a ladder system, where you work your way to the top."

If he makes it, Palmer would be only the third Black race-car driver to compete in Indy's history, and if he won, he'd be the first Black driver to do so.

"I just first want to be a race-car driver," Palmer says. "And then secondly, I want to be an inspiration for a lot of people, someone that they can look up to." 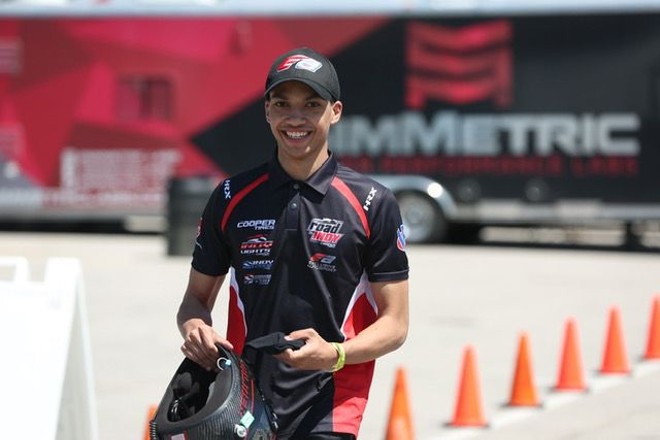 His current obstacle right now, though, is receiving the proper funding to get him there. In racing, drivers are responsible for providing the funding for their teams, which includes transportation, the use of the car, the team members and all other expenses. Currently, Palmer is saving up by teaching race-car driving to kids and adults at the Gateway Kartplex within the World Wide Technology Raceway. He also started a GoFundMe with the goal of reaching $200,000.

While the money is needed, Palmer's focus is lasered in on the fundamentals of racing.

"I don't really think about how fast I'm going," Palmer says. "I just think about where to brake, where to turn in, how to pass."

Asked if he ever gets scared, he shrugs.

"You don't really have time to think about being scared," Palmer says. "You're just thinking about what you should do next."