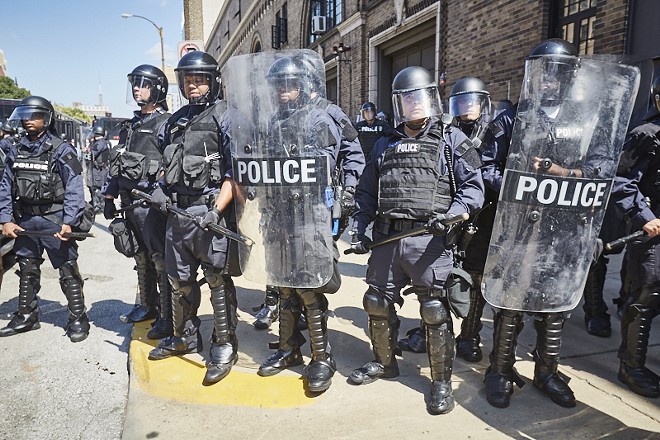 No Call No Show: St. Louis Circuit Attorney Kim Gardner has become the subject of repeated attacks from bad actors on the right aiming to portray her as a George Soros puppet out to get white people, or whatever racist nonsense that side thinks will galvanize its base, but it wasn't racism that led to the most recent round of criticism lobbed at Gardner's office; it was plain-old dereliction of duty. This past week, Circuit Judge Jason Sengheiser was forced to dimiss a first-degree murder charge against a suspect in the state's custody, not due to anything exonerating, but owing simply to the fact that nobody from the prosecutor's office would show up to fucking court. After three no-shows in May, June and July, Sengheiser cut defendant Brandon Campbell loose, accusing the office of having "abandoned its duty." Worse still, this appears to be part of a pattern: As detailed by the St. Louis Post-Dispatch, two additional murder cases were dismissed this week, "stemming in part from absent or unprepared city prosecutors." And while charges have been refiled in two out of three of these cases, only one murder suspect is currently in custody — despite a statement from Gardner's office claiming Campbell was back in custody, police said at press time he was still at large. They say 80 percent of success is showing up — if you can't even get that part right, you have problems that can't just be waved away as political ones.

Police Training: Let’s say you’re a St. Louis cop, one of the ones who likes beating people or who is just fine with being on a group text with fellow officers joking about all manner of terrible stuff. And let’s say you just spent the past few years watching a criminal case play out against a few or your (now former) colleagues charged with beating a Black undercover detective (current colleague) in 2017 and covering it up. Things probably looked pretty bad back in November 2018, right? Dustin Boone, Randy Hays, Christopher Myers and Bailey Colletta were freshly indicted, and who could say if more would be added to the list? Who knows, you might even be one of the cops in all those videos showing police officers pepper spraying people on their knees, slamming random people to the street, dragging them across the concrete for no real reason other than to show them you’re the police and they aren’t. But the years passed, and you weren’t indicted. The feds indicted one other officer, Steven Korte, but he beat the charges at trial. One not guilty finding and two hung juries for Myers. You saw Boone damn near walk, and Jesus, if jurors couldn’t decide if that guy and his phone full of racist, violence-celebrating texts was guilty, what’s the likelihood they’ll stop you? Hays is going to actual prison, but if he hadn’t crossed the blue line to take a plea deal, maybe he skates like Myers. That’s what you’re learning, right? Colletta? She was sentenced to two weekends of lockup and probation. Maybe your brand of violent, racist policing isn’t in as much danger as you thought back in 2018. What did you learn? Delete your texts? Don’t admit anything? Looks like you have a future after all.

End Game: Even in the ridiculousness of the Missouri state legislature there are days that stand out for their brain-melting embrace of fake outrage and deceit. Friends, Monday was one of those days. Republicans staged an actual hearing with handpicked guests to battle the scourge of critical race theory. This is not actually an issue in Missouri (or anywhere), but it’s the latest fashion this season for disingenuous right-wing grifters, and we’ve got plenty of Nick Schroers and Bill Eigels to go around. It’s that the playbook is so worn, so obvious that gets us. It works like this: Find some random idea to glom onto, making sure it’s obscure enough that the general public doesn’t know the definition. Define it in such a way as to scare/infuriate your base. (Accuracy is discouraged.) Claim your enemies are conspiring to push this invented and obscure “problem” throughout the land, preferably targeting kids. And insist the people of your party are the only safeguard against this pretend travesty. Like we said, it’s not a new playbook or a particularly hard one to figure out, but it’s maddeningly effective. Once in motion, you can push any manner of agenda. That’s how you can, say, restrict voting rights while pretending to protect election integrity or cower to the dumbest of COVID-19 culture warriors while insisting you’re a champion of personal responsibility. And, as we saw Monday, it’s now how you can simultaneously steer money away from public schools and retaliate against anyone who makes you feel uncomfortable as a white person while cosplaying as a defender of children.