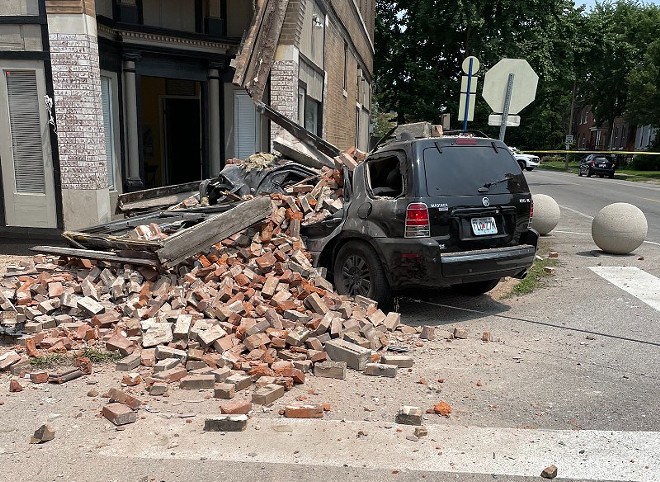 A high-speed collision sent an SUV careening into the front door of a Tower Grove East building with such force that part of the building collapsed.

Bricks rained down on a black Mercury Mariner after it slammed into the corner of 3201 Arsenal Street, at South Compton Avenue. The driver was able to climb out of the wreckage without life-threatening injuries, St. Louis Fire Department Captain Garon Mosby says.

Members are removing loose bricks from the building to make the scene safer.@SLMPD, City Tow, and the Building Division also on scene. #STLCity pic.twitter.com/WDv3WAktEp


The crash happened shortly before 12 p.m. The driver of the Mercury was headed west on Arsenal and reportedly sped around another westbound vehicle before running the stop sign and colliding with a burgundy vehicle that was going north on Compton. The Mercury glanced off the burgundy vehicle and veered into the building.

Firefighters and police arrived shortly after. Firefighters from Battalion Four used a winch to ease the mangled SUV from the brick pile, and firefighters escorted six people out of the second floor of the building, Mosby says. A passenger in the burgundy vehicle was taken to the hospital with what were described as non-life-threatening injuries.

It was the second time the building had been hit by a car this year, despite being surrounded by cement balls designed to minimize the usual traffic craziness along the intersecting stretches of Arsenal and Compton.

Police didn't immediately respond to questions about the crash, and it's not clear if any charges are expected. 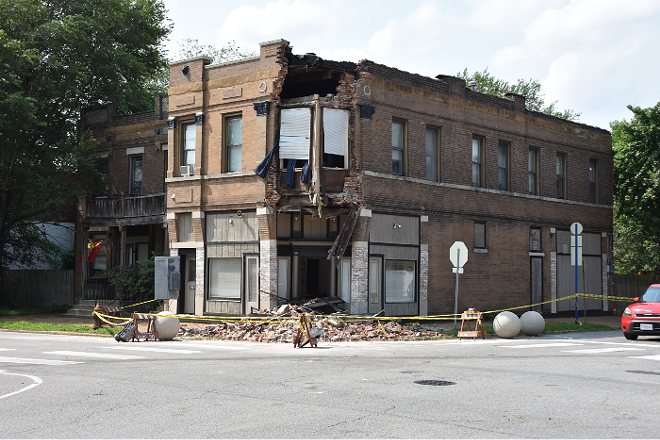 Correction: An earlier version of this story incorrectly reported the number of people in the Mercury Mariner. We regret the error.