Sharks in the Mississippi? Researches Say It's Possible Near St. Louis 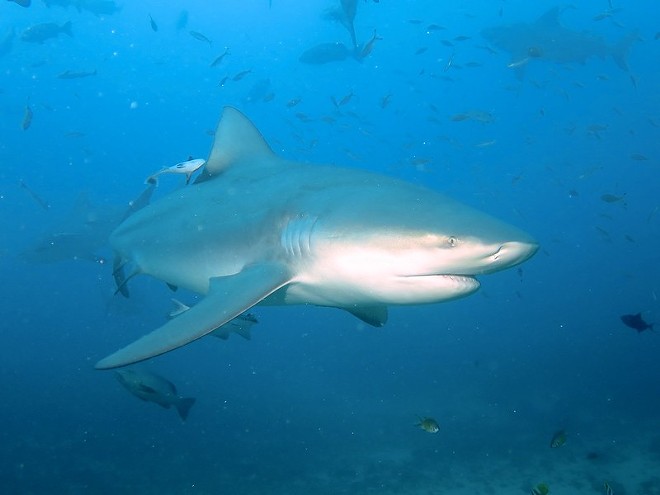 All sorts of surprises lie beneath the the surface of the Mississippi River. Refrigerators, cars, even the occasional body have been found lurking in the depths of The Big Muddy. Now, two researchers suspect there may be something even wilder — bull sharks.

Dr. Ryan Shell, a research associate at the Cincinnati Museum Center, and Nicholas Gardner, a WVU Potomac State College librarian, affirmed the legitimacy of two St. Louis-area bull shark sightings in the 20th century in “Movement of the bull shark (Carcharhinus leucas) in the upper Mississippi River Basin, North America,” published in the July issue of the journal, Marine and Fishery Sciences.

Bull sharks are aggressive and many experts consider them to be the most dangerous shark species, according to National Geographic.

The first sighting happened in Alton, Illinois, in 1937, when two fishermen caught a five-foot long shark, the study says. This is the farthest inland a bull shark has been sighted up the Mississippi, according to a press release.

The Alton sighting triggered a series of false identifications of bull sharks, according to Gardner.

“The 1937 sighting seems to be the cause for people jumping to a bull shark identification whenever they think they’ve spotted a shark on the Mississippi,” Gardner says in the release. “In most cases, we found that if it wasn’t an outright hoax, it was never a bull shark, more often it was a case of a shark being caught in the Gulf that was dumped from a boat, or a total misidentification of a freshwater fish.”

The second sighting occurred in 1995 just south of St. Louis near the Rush Island Power Station in Festus. This time, a shark was found stuck in a grate. 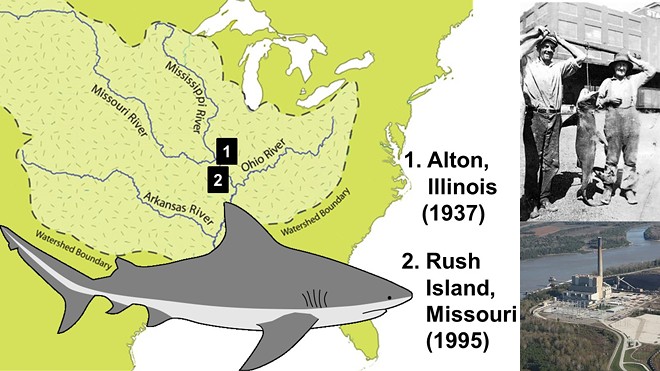 Bull sharks are well-known for their ability to move between freshwater and saltwater ecosystems, the study says. The researchers found that temperatures in the Mississippi are tolerable for the sharks as far north as Alton for most of the year.

“In fact, much of the lower portion of the upper Mississippi River experiences favorable temperatures for these sharks throughout large portions of the year,” Shell says in the release.

Aside from the two sightings, bull sharks have never been confirmed to travel north of Louisiana along the Mississippi River Basin, according to the study.

The researchers gave three hypothetical explanations for the rarity of sightings.

The study says that these two explanations would indicate that bull sharks might move along the Mississippi cryptically. Because bull sharks swim along the bottom of rivers during daytime, according to the release, spotting a shark through the mud-soaked Mississippi would be difficult.

In a third, less exciting hypothesis, the study says the two sightings might be the result of random chance, although unlikely, as they both seem legitimate and the river’s temperature near St. Louis is tolerable for the sharks.

Gardner hopes the research creates dialogue that might bring answers as to why and how bull sharks have traveled up the Mississippi.

“Our research has left us with more questions than answers," he says in the release. "So our hope is to start a dialogue around bull shark behavior and encourage others to join us in exploring the problem.”