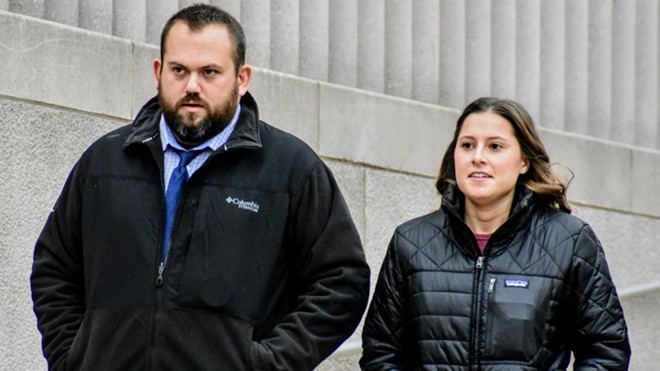 Ex-St. Louis cop Randy Hays was sentenced today to more than four years in federal prison for beating a Black undercover detective he thought was a protester.

Hays, 34, pleaded guilty in November 2019 to using unreasonably force in the arrest of Detective Luther Hall. His sentencing had been delayed, because Hays had taken a deal to testify against fellow officers accused in the attack.

In September 2017, Hays was assigned to the police department's Civil Disobedience Team, better known as "riot police." Mass protests had broken out across St. Louis following the acquittal of another former officer, Jason Stockley, in the 2011 killing of Anthony Lamar Smith.

The police responded in force, arresting more than 120 people on the night Hall was assaulted. Hall and a white partner were embedded with protesters, streaming footage for police in the command center and calling in allegations of vandalism. Both detectives were arrested, but while Hall's white partner was released without injury, Hall was beaten bloody and the phone he was using to record that night was smashed.

Hays later admitted clubbing Hall with a nightstick and kicking him. He testified that other officers also participated, including now-former officer Dustin Boone. Boone was convicted a month ago. As part of the case, the FBI uncovered a trove of racist texts on his phone.

Boone and Hays both bragged about unleashing violence on protesters — until they learned one of their victims was an undercover cop. Even then, it wasn't the violence that bothered Hays.

"Wasn't just us," Hays texted to Boone in 2017. "I don't like the beating the hell outta a cop, but the department put him in that spot, he could've announced himself at any time. And he wasn't complying. The camera thing is just ignorant, nothing we all haven't done and if it was a protester it wouldn't be a problem at all."

Hays' girlfriend at the time was also an officer, Bailey Colletta. She has pleaded guilty to making false statements in the case and is set to be sentenced on Thursday.

Two other officers were also charged in the case. Officer Steven Korte was acquitted in a trial this spring. Ex-cop Christopher Myers beat one charge in that trial, but jurors deadlocked on charge related to accusations he smashed Hall's phone. In a second trial in June, jurors deadlocked again. Prosecutors could still pursue that charge a third time.

Boone is scheduled to be sentenced on September 15, just two days shy of the fourth anniversary of the beating. He remains out of prison while he awaits his punishment.

Multiple protesters, journalists and uninvolved people who were on the street during arrests have also reported being beaten or otherwise abused by police, leading to more than two dozen civil lawsuits against the city and police. No criminal charges have been filed against police in any of those cases.