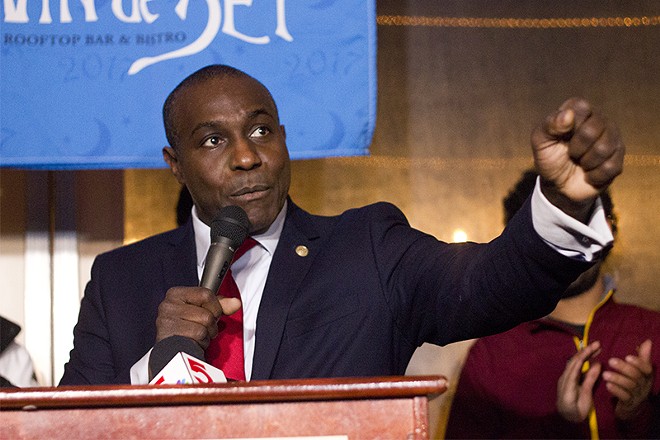 After five and a half hours and multiple quarrels, the Housing, Urban Development and Zoning committee voted 9-0 on Wednesday to move forward with a plan for spending $153 million in federal funds for St. Louis.

Board Bill 2, sponsored by city Board of Aldermen President Lewis Reed, outlines how to spend the first portion of $517 million granted to St. Louis by the American Rescue Plan. This was the first round of three the bill has to go through.

An alternative to Mayor Tishaura Jones’ $81.4 million proposal, the bill adopts a majority of her plan and adds nearly $72 million in spending, largely focused on development. A major chunk of the additions in Reed’s bill adds $33 million to create a fund for economic development among four major north St. Louis streets, such as Dr. Martin Luther King Drive, and $20 million for renovating neglected or abandoned city housing.

A key piece of the mayor’s plan was dropped by the committee: $500 cash payments to families in need. The total amount being asked was $5 million, and it quickly became a point of contention for the committee.

Alderman Shane Cohn of the 25th Ward pleaded with the rest of the committee to reinstate the payments. Other members opposed the payments, arguing that those struggling could find help through the incoming child tax credit or potential future stimulus checks. HUDZ committee Chair Jeffrey Boyd said he might be willing to add the payments at a later date. Reed also pushed back, saying the assistance wasn’t enough to be “transformational.” Cohn disagreed.

“$500 might not seem like a lot to President Reed but it sure the heck might make the world of difference to be putting food on the table or making a car payment or being able to get to work,” Cohn said at the meeting. “I’m just having a hard time reconciling some of the comments being made right now.”

Cohn was outvoted 6-3. In a statement after the vote, Jones’ office echoed the alderman, saying the checks would be crucially important to thousands of St. Louis families. Jones will “continue to advocate for an equitable recovery, driven by data and community feedback, that helps all St. Louisans thrive,” the release said.

The $33 million for economic development became another debate. The money would be distributed as grants to small businesses and nonprofits and covers a percentage of total costs on projects on Dr. Martin Luther King Drive, North Grand Boulevard and West Florissant and Natural Bridge avenues. Critics on the committee questioned how the areas were chosen. Alderwoman Sarah Martin called the development idea “random with no data.”

“This is just kind of throwing stuff at the wall at the last minute,” Martin said.

Boyd pushed for the funds, saying the city has been too stingy when it came to development in the past. He said he wants to make the process of development as inclusive as possible, and the good part is that the committee is "not done yet." He committed to continue to work on the plan over the summer session.

Other parts of the bill include $15 million for the Healthy Home Repair fund, $5,000 grants for small businesses, additional money for broadband and public WiFi and money for job training in software development, analytics and data management.

Reed’s bill also proposed to allot $5 million to overtime for police officers. This comes after Jones’ newly passed city budget cut $4 million from the police department. Martin also commented on throwing money at police overtime rather than focusing on incentivizing the officers hired to stay on board since the city has struggled to hire.

Another flashpoint in the meeting focused on $2 million to create intentional encampments for people who are unhoused. The item was also in the mayor's plan, but exemptions were included in Board Bill 2, barring the encampments in wards 2, 3, 4, 5, 14, 16, 19, 21, 22 and 27.

During the meeting, wards 7 and 10 were also added, with Cohn and two other members rallying against the exemptions. Cohn called the exemptions “disingenuous” and said the board should be taking a more thoughtful approach for the unhoused.

The wards exempted largely are in north St. Louis, with the aldermen saying their ward is already contributing to helping the unhoused and that instead of intentional encampments, the focus should be to provide housing or find alternative solutions to the encampments. Boyd proposed leaving out the intentional encampments part of the budget due to the request of exemptions.

“Maybe the right thing to do is call a timeout, back up, zero this part of the budget out,” Boyd said. “There is a message in the fact that so many aldermen are saying ‘Not in my backyard.’ Quit trying to make us do stuff. I’m not going to call you out but you know who you are. Stop trying to make us do stuff, sit down and talk to us, listen to us. This ‘my way or the highway’ is not going to work.”

Boyd did not end up introducing an amendment to strip the intentional encampments out of the plan.

Many of the aldermen were willing to pass the bill in order to move it to the next round of hearings and thanked the public, president and mayor for their time spent on the plan. There was no public comment on the bill after it was amended. Reed's office has said the bill will be on Jones' desk by July 16 for approval.

The bill is scheduled for a reading by the full Board of Aldermen on Friday, and would then head to the Board of Estimate and Apportionment at a special meeting for approval before its final vote at the Board of Aldermen on July 16. Last week, the E&A had endorsed Jones' proposal. Friday's meeting is available to watch by going to the city's YouTube channel.