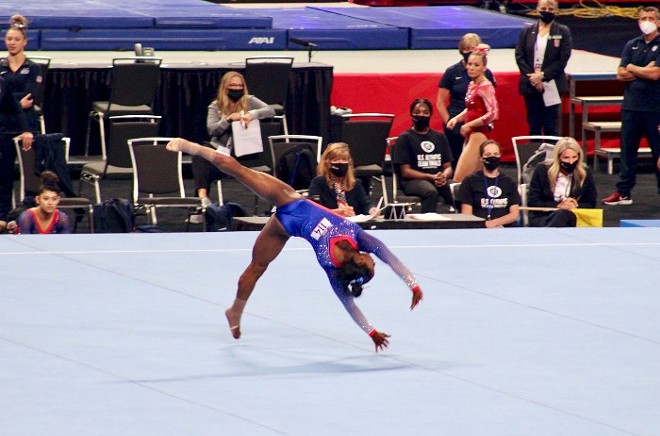 The first day of the women’s 2021 Olympic Team Trials, a spectator fainted. It was the second round of rotations, so the crowd in the Dome at America’s Center had gotten a feel for the order of events. I was sitting with my new friends, ten-year-old Lakshmi Coffey and twelve-year-old Elizabeth Ayers, who had come from Houston to compete in the USA Gymnastics Championships that were being held in another part of the building but now had time to be fans.

The fainting didn’t cause too much of a fuss, even though the woman’s seat was in full view of the rest of the stadium and she was within spitting distance of the gymnasts competing. A stretcher was brought out briefly, then put away. A couple of security guards lingered to make sure she was OK. But while it went largely unnoticed by everyone else, it launched Ayers and Coffey into a complete strategy mode.

“I would faint on accident if it meant I could see Simone Biles,” Ayers said.

Then they spotted Biles with her teammates on the floor, and their minds shifted back to reality, trying to figure out when she’d be up on beam.

Coffey and Ayers were two of more than 20,000 people who showed up for one of the four nights of the Olympic trials this past weekend. As competitors themselves, they had received free passes to the trials, so as soon as they were done with their own events, they went to the dome to watch the older gymnasts compete in the artistic disciplines. They especially wanted to see Biles.

“This is so cool because it’s the closest I’ve ever been to her,” Ayers said. “I’m in the same room as Simone Biles.”

The girls were as awe-struck as any of the acclaimed gymnast's other young fans, but there was a certain sophistication in the way they analyzed the performances, earned by practicing the same sport for hours each week.

“Did she just do an aerial?” Coffey asked Ayers at one point.

“No,” Coffey said, answering her own question. “She had bent legs and grabbed her thighs. I’ve done that, but I landed on my head.”

The trials in St. Louis were the last opportunity for U.S. fans to see the gymnasts in person before the Olympic team heads to Tokyo later this summer. And though the event featured one of the sports all-time greats in Biles, the four days were also filled with these moments of intimacy among the fans, competitors and their families.

On the Wednesday before the competition, USA Gymnastics hosted a virtual media day. The athletes and reporters might have clustered in person for interviews in non-pandemic times. Instead, we talked online, with journalists dropping in remotely from around the country. One of the athletes I was able to talk with, though briefly, was sixteen-year-old Skye Blakely. She touched on how she was able to keep herself in a relaxed mindset, taking each competition as it comes.

I asked Blakely about the dynamic between her and her teammates and what the culture around their competition was like. The way she described it made it sound more supportive than competitive.

"We cheer for each other and laugh on the side," she said. "I really enjoy having them around and being able to compete with them."

By chance, Blakely was one of the first people I saw on Friday when I arrived at the dome, about an hour into the competition. She was huddled with a group of coaches in silent tears, tucked between semi-trailers on one of the convention center's side streets. I found out later that she crashed on the vault during her warm-up and had to pull out of the competition. Years of training for Tokyo had fallen away with one slip-up.

The pressure to perform is great at any Olympic trials, given the narrow path to the games. But the lead-up to this year had been extra chaotic. The trials had come after a long, difficult period for the gymnasts. This was the first trials meet since the sport had been forced to reckon with the years of sexual assaults by former national team doctor Larry Nassar. It was also a meet that should have taken place a year ago but was delayed by COVID-19, a drastic change, especially for the older gymnasts who went through the grueling process of training for the Olympics for that much longer.

After all that, the competition in St. Louis was an opportunity for the gymnasts and fans to celebrate the sport again. Unsurprisingly, the energy created in the dome was incredibly warm. Former Olympic gymnast Peng Peng Lee emceed the event, entertaining fans with scattered competitions, such as charades and flex-offs. On Sunday night, people in stadium sang "Happy Birthday" to her, and she blew out the candles of a miniature cake and wiped away a couple tears in what seemed like honest surprise. The stadium roared when she pulled out a T-shirt gun, then immediately turned to singing “Y.M.C.A.” shamelessly, loudly, together again in a post-COVID shared space.

On Sunday, just before the end of the weekend’s events, I accidentally stole the seat of Simone Biles’ boyfriend, Houston Texans safety Jonathan Owens. I had been rotating seats in the arena and finally stopped at an end seat in the middle section, not too close and not too far from the floor. I asked the woman next to me if she had a family member competing. 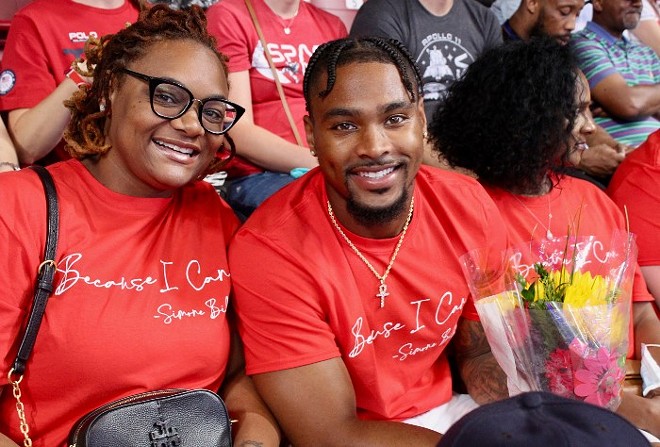 “Yeah, Simone,” she said. I had forgotten that these athletes' stardom didn't close them off from the real world, and the casualness of it all was incredibly welcoming. Owens and his family are St. Louis natives, and he was a standout at Christian Brothers College High School and then Missouri Western State University before moving on to the NFL.

“We’re her boyfriend’s family,” the woman told me. “He’s in the bathroom right now. You can meet him when he comes back.”

And so I held my — his — spot firmly, waiting for him to return. When he did, he shook my hand very pleasantly, as he retrieved from one of his relatives the cellophane-wrapped bouquet I assumed would be going to Biles at the end of the day.

I gave him his spot back and moved back a few rows to another open seat, this time next to a little girl who was in near-hysterics.

“Simone waved at me,” this girl was telling her mother. I glanced back down to Owens to confirm what I guessed. She was directly in line with Owens and his family. “I was yelling her name and she pointed at me and waved and I literally can’t believe it.”