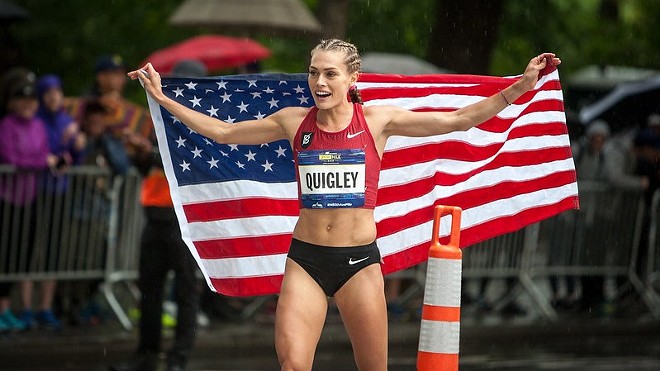 St. Louis native Colleen Quigley will not be competing in the 2020 Olympic trials. Citing a need to give her body a break, Quigley addressed her fans on Instagram on June 19.

“The truth is the last couple of months I’ve been dealing with some issues with my body, there’s been a lot of ups and downs,” Quigley said in the video. “This last week, things took a turn for the worst and I had to make the difficult decision to withdraw from the Olympic trials. I’m not going to be able to race this week and that’s really devastating for me.”

Quigley wrote in her caption that she had been looking forward to competing in Tokyo since she got on the plane home from Rio in 2016. She said she had been struggling with various injuries for the last few months. Describing how “beyond frustrating” she was feeling as she tried to make it work despite the injuries, Quigley ultimately decided she needed to “play the long game” by taking time to rest physically and mentally.

The athlete said she had felt an increase of pressure this time around — not from her sponsors or support system, but from herself.

“All the pressure I’ve put on myself, the more I wanted it, the harder I tried, the harder it was to achieve,” Quigley said.

Posting this afternoon, Quigley thanked her fans and others who supported her decision. She said she feels seen and loved by her community.

Quigley, who was once a student at Nerinx Hall, has been running since her freshman year of high school. She changed coaches and training environments after the Olympics were postponed last year. She also began a new partnership with Lululemon.

With her time to rest, Quigley said she’ll be looking at her career as a whole rather than one race or one summer. When she feels it’s time to go back to training and racing, she will make sure it’s for herself and not anyone else. For now, she’ll be cheering on Team USA when they compete later in the summer.

The Olympian does have a promise, though.

“I can’t promise how I’m going to feel after posting this, or tomorrow, or even next week, but I can promise you one thing: after taking some time to rest up, I’ll be back,” Quigley said.